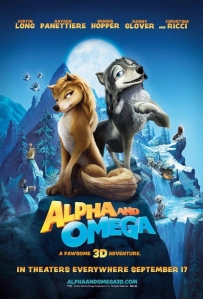 Today RedBox supplied me with an animated movie from last year known as Alpha and Omega, with the voices of Justin Long, Hayden Panettiere, Danny Glover, Dennis Hopper, and Christina Ricci. If I remember correctly, I believe I first became mildly interested in this movie after seeing that Panettiere and Ricci were in it, and they are hot, and they played those little interview videos with them and showed clips of the movie at Best Buy and piqued my interest. I never really got around to looking for it in theaters or on DVD, but I found it while browzing the RedBox and decided to give it a go.

Alpha and Omega is the story of two wolves (one an alpha, the other an omega … isn’t that wacky?!) who grew up together until one of them went off to train to be an alpha. Before this gets any more confusing than it deserves, in this movie an alpha is one of the top hunters and an omega is … not. Kate (Panettiere) is the alpha and Humphrey (Long) is the omega. So they quickly grow up and Humphrey is a wacky, goofy slacker, and Kate is a straight-laced hunter. Quite the original combination, I know. Anyways, Kate is the daughter of the leader of the western pack of wolves (Glover), who forms a contract with the leader of the eastern pack (Hopper) in times of low food. The contract is that Glover’s daughter, Kate, will marry Hopper’s son and combine and lead the two packs. It’s probably not too much of a surprise at this point, but Humphrey also loves Kate. Kate and the eastern pack … prince, I guess, (named Garth) are supposed to meet up at some moon-howling party. This basically entails that the wolves get up on a mountain and howl together, and howling is either the wolf version of a date or straight up fuckin. Well Garth is no good at howling and that turns Kate off. She wants a wolf with a long, hard howl, and Garth’s is weak and unsatisfying. So Kate wanders off and bumps into Humphrey and they fight about something before they are both shot with tranquilizers by humans and taken to Idaho to get their howl on and repopulate the wolf population down there.

Back in Canada, the wolf packs get to arguing and threatening with war now that Kate’s disappeared and it’s determined that, if Kate doesn’t get back in a few days, they are going to howl up the rest of the wolves. Kate sets on her way back to Canada and Humphrey follows. Back in Canada, Garth starts falling for Lilly (Ricci), Kate’s younger sister. He probably doesn’t howl the shit out of her out of respect for her sister. And Kate and Humphrey go through all sorts of shenanigans and goings-ons on their way back home. Will the two ever fall in love? Tune in to find out … or don’t, this movie sucked.

There were MANY problems with this movie. The first one is that the commercials they put on the screens at Best Buy must have been the ONLY decent animation in the entire movie. The backgrounds are colorful and pretty, but the character animations are stiff, unrealistic, and ugly. This could be forgivable with a quality story or a laugh or two … and someone should have told them that. The story is what Romeo and Juliet would be if Shakespeare was retarded. And the characters seem to attempt to be funny only to fail drastically. I did not laugh or even crack a smile through this entire movie. Something about the movie pretty much shut me down in the first 15 minutes and never got me back. The movie even managed to drain any and all funny out of the usually hilarious Larry Miller, who plays a bald turkey or something that helps the two wolves return home. The howling scenes, which as I said are either innuendo for fucking or, in some occasions, are quasi-musical numbers with little to no words and just random howls instead. These are completely cringe inducing. Cringe or bash-your-head-against-things inducing. And the logical errors cannot be forgiven! There is a scene where the turkey bird (or whatever Larry Miller’s bird was supposed to be) is dragging Humphrey (the adult wolf!) behind him and eventually takes flight with the wolf hanging from his feet. If a ambiguous turkey bird had that kind of wing strength, I think that could be a solid defense mechanism and then it may be a little too difficult to eat Larry Miller for Thanksgiving. Also, there’s a scene that would make my gun-crazy friend Mike punch himself in the dick, as a missed shot from a shotgun aimed at the two wolves misses and tears a wolf-sized hole in the chain link fence.

Okay, I know what some of you may be saying: “Obviously this movie was meant for kids and not for you”, and there was a time when this would be an acceptable excuse. But I think nowadays Pixar has set that bar a little higher than that, where a movie can be both enthralling to children and entertaining to their parents as well. And don’t insult your children with this movie, they’re smart enough for Pixar. Watch you some Wall-E. That shit is howling awesome.

Also, I feel that I should take it down a notch and say that this was far from the worst movie ever, there’s just no reason to see it. That’s why I give it a “skip it” out of 22 1/2.