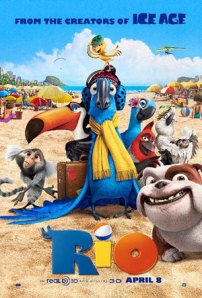 Upon returning my last RedBox movies, I found 2 new movies I wanted to watch.  Both are computer animated movies about birds.  One I expected to be decent, the other I expect to be crap.  You’ll have to wait for the crap one, because I first decided to watch Rio, with the voices of Jesse Eisenberg, Anne Hathaway, will.i.am, Jamie Foxx, George Lopez, Tracy Morgan, and Leslie Mann.

Rio starts off in Rio de Janeiro, with overly adorable baby Blu (Jesse Eisenberg) watching a bunch of colorful birds singing and dancing, as birds are prone to do in Rio de Janeiro.  Then they all start disappearing as smugglers snatch all of them and put them into cages, grabbing baby Blu as well.  In the process of being driven through Minnesota, one cage falls out of the truck, this cage of course containing Blu.  Blu is found by young Linda (Leslie Mann) and taken in as her pet.  The movie jumps to many years later where Linda owns a book store and Blu gets to run around it freely (I say “run around” because Blu never learned how to fly).  One day an Ornithologist from Brazil sees Blu in the window and rushes in to speak to Linda about him.  He informs Linda that Blu may be the only male Macaw like him left in the world, and back in Brazil they have possibly the only female and they want Blu to knock her up.  Linda begrudgingly goes to Rio to pimp out her bird.  They leave Blu in a habitat with Jewel (Anne Hathaway) to try to get them to get freaky.  But Jewel does not take kindly to this here city bird and wants only to escape captivity.  While the Ornithologist and Linda go to enjoy Rio, smugglers break in to the bird habitat and steal all the birds, including Blu and Jewel.  They get … claw-cuffed … together, soon escape, and have to figure out how to free themselves of of their shackles with the help of the native animals, played by will.i.am, Jamie Foxx, George Lopez, and an English Bulldog played by Tracy Morgan, who finds out his puppy is gay and has it put down.  Okay, that part didn’t happen.

There’s some good and some bad to this movie.  To start off with the good: the animation is pretty spectacular, unlike earlier reviewed Alpha and Omega.  I love it when an animated movie is able to give the animals life and humor in the way they behave.  The animation is also very colorful, as I imagine Rio de Janeiro itself is.  The Bulldog, strangely, was the only animation problem I have, but I’ve had a bulldog for many years, and even though they are a lot of face and can occasionally have a slobbering problem, this movie overdid the slobbering and did not capitalize on the adorableness of the breed as well as they could.  But that’s probably a flaw you’d only notice if you had a bulldog.  As for the story, it’s a classic, cliche, but enjoyable type of a pet separated from his owner and trying to return to them.  Along the way, as should come as no great surprise, Blu and Jewel start crushing on each other, and the opposites attract idea is hardly a new one either, but it’s fine.  The movie is not what I’d call funny, though it does seem to attempt it often.  I think this is an animated movie that is more meant for kids and not quite up to the level of your usual Pixar movie that tends to be as enjoyable for kids as it is for adults, but most of it is enjoyable enough for both.

The biggest bad thing, for me, is something that happens about 4 or 5 times in this movie: Musical numbers.  I friggin hate musicals, with a vengeance.  I had to tolerate them so much in childhood, between getting dragged to plays often, and of course the early Disney musicals.  I don’t always hate the entire movie because it’s a musical, and I didn’t hate Rio because it was a musical, but the musical numbers slow the movie down and are not very good anyway.  They always seem so out of place.  I assume it’s somebody’s cup of tea, but I don’t want my movies to break into song for no reason.  Again, it only happens a few times, so it’s not that big of a deal, but I feel I would’ve enjoyed the movie much more if they had not gone that route.  Also, I was not entirely a fan of the voice acting.  For some reason, most of the cast didn’t click for me.  It wasn’t until Blu created Facebook that he finally came into his own.  I may see too many movies.  I get so confused.  They weren’t awful at it, they just didn’t do it for me for some reason.

All that being said, you probably won’t hate this movie.  I didn’t.  There were good parts of comedy, romance, action, … musical (shudder) … and a story you won’t hate sitting through with your kids, and probably not even by yourself.  I give Rio a “Solidly okay” out of “Wicked Pisser”.