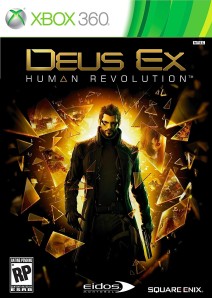 Finally I get to review a game that has been out for less than a couple months. I just beat Deus Ex: Human Revolution, brought to you the fantastic companies of Eidos Montreal and Square-Enix, arguably two of my favorite video game publishers. Lets see how they did.

Deus Ex: Human Revolution (and no, it’s not Deuce Ex, so stop pronouncing it that way like almost everyone that’s asked me about it) is a prequel to the original Deus Ex from back in 2000. The game follows the story of Adam Jensen, the head of security at a company known as Sarif Industries, located in Detroit. Sarif specializes in a very popular trend among humans in this year (2027) known as augmentation. Augmentation is the practice of adding robotics (either in complete limbs or simple neurochips) to a person to make them better. Sarif, and Jensen’s ex-girlfriend Megan Reed, are preparing for a speech about a new discovery known as “Patient X” that will revolutionize the augmentation industry. While Jensen talks to his boss, CEO David Sarif, an alarm goes off that is initially written off as a minor lab accident. Jensen goes to investigate to find that the labs are on fire and most of the scientists are dead. He soon finds the culprits, 3 heavily augmented mercenaries (one of which looks just like UFC Hall of Famer Chuck Liddell), and is quickly grabbed by Chuck Liddell-bot and thrown through a window before Liddell-bot kidnaps his girlfriend. Jensen is badly injured, nearly fatally, but worry not. They can rebuild him. They have the technology. Better than he was before. Better, stronger, faster! So Jensen becomes the new 6 billion dollar man (adjusted for inflation). 6 months later, Jensen is back on his brand new metal feet. He returns to Sarif Industries because of a hostage situation at the hands of an anti-augmentation group called Purity First. The rest of the story follows Jensen as he gets caught up in the corruption of business, politics, and humanity and he must find out just how deep the rabbit hole goes.

This game is hard to give people a review about, as I have struggled with when people have asked me while I was playing it. And it’s the gameplay that causes that conflict. This game, similar to Fallout or Borderlands, mixes the first-person shooter and the role-playing game, two of the most popular and most segregated of acronyms. Typically the FPS genre is more fast-paced and action oriented, and the RPG is more slow and methodical, so generally speaking, a hardcore FPS (Call of Duty) fan would have nothing to do with a hardcore RPG (Final Fantasy). Mixing these two together, surprisingly, can yield results that many people find very appealing. I, for one, am a great fan of Fallout, Borderlands, and now Deus Ex (though technically I was a fan of the first one as well, but I can’t remember back 11 years ago). This game also takes this mixture and adds another mixture for the player to choose from: stealth (like a Metal Gear Solid) or a cover-based shooter (Gears of War). The problem comes with recommending it to people. People tend to only ask “How is it?” and not stop to think whether or not I like the same games as you. So, based on the gameplay, I would say, if you liked Fallout and Borderlands, and can tolerate a slower pace, then you’ll probably like this game. If you thought those games are boring, you will probably not make it through this game, at least not in the stealth fashion that I did my first playthrough with.

The graphics are pretty well fantastic. Everything has a uber-futuristic look to it, and there’s a very grimy side to the cities as well. But everything looks fantastic. The only thing I got to thinking about is the performances of the characters outside of the movies. And I think L.A. Noire is to blame. I think I’ve been spoiled by the facial capture technology used in LA Noire because that game basically took an actor’s performance and pasted it onto the face of their characters. So, in comparisson, the regular game technology is hurt for me. But they weren’t abysmal or anything.

Most reviews talk about sound quality as well as the other stuff, but I don’t pay attention to sound in a game. I think, if you’re paying attention to sound, that means it’s bad. It should be heard, not noticed. Whereas this game is concerned, the music has a real techno theme that seems appropriate for the game, and every other sound goes without notice by me. The voice acting caused no complaints save for the main character, Adam Jensen, who is so horribly raspy, even before nearly dying, that it grates on my nerves a bit.

The story is a little convoluted, but still enjoyable. There is a lot going on here between being betrayed by everyone who is striving for their own agendas that it’s hard to find out who the bad guys are. Of course, this is probably a choice by the writers of the game, because otherwise there would be no justification of having 4 endings, depending on your choices. Some games take the choice to be as good and evil and it’s as simple as this. And most of the time you know what you’re doing throughout the game. When it comes down to decisions like “Help the old lady across the street” or “Stab that baby”, you know what you’re doing. This games choices are more vague, depending on whether you agree with the people that think people should be pure and without augmentations, or the people who think it’s natural evolution for humanity, and the extremists in both.

As is typical with open world games, this game can take some time to finish. I think my save file at the end of the game said it took me just over 20 hours to complete this game, so it’s certainly not a game to be picked up and messed around with for a few minutes at the time. But with the gameplay being so engrossing and fun, you might not want to do that. So, I give this game a “If you like the game type, you’ll like the game” out of “Spatula”.