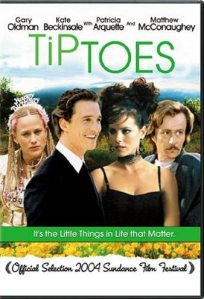 By a show of hands, who wants to see one of the strangest, worst Rom-Dram’s you could possibly sit through?  My friend Forty and I did, and so we got Tiptoes in from Netflix and got to it.  Tiptoes stars Matthew McConaughey, Kate Beckinsale, Gary Oldman, Patricia Arquette, Peter Dinklage, and a small part (no pun intended) goes to someone I actually knew before this movie and recognized in the movie, Bridget Powers (aka Bridget the Porn Midget).  I’m going to try to say nothing offensive to dwarfs in this review because I’m pretty sure Forty and I said them all while watching.

Tiptoes is the story of a couple, Steven (Matthew McConaughey) and Carol (Kate Beckinsale).  Carol is a painter and Steven trains fire fighters.  When Carol finds out she’s pregnant, Steven freaks out, but not for the normal male reasons for freaking out when his girl is preggers, but because Steven is the only normal-sized person born to a family of dwarfs.  Carol finds this out when Steven’s twin brother, Rolfe (Gary Oldman), a dwarf, attempts to visit his brother when he is out of town and ends up staying with Carol.  Carol pretty quickly becomes worried about the possibility of her baby being a dwarf but calms down after spending time with Steven’s family.  Strangely enough, when they have the baby and it turns out the baby is a dwarf, Steven freaks out and the two separate.  Carol goes to live with Rolfe and it is questionable whether Steven and Carol can ever work it out.  The movie ends with Carol and Rolfe kissing, suggesting they would perhaps end up together.

This movie is completely strange for reasons beyond the subject matter.  The movie seems to be the first (that I can think of) dwarf-empowerment movie, at least since Jason Acuna in the Jackass trilogy.  And that’s an honorable enough cause, but it’s very strangely executed.  There are a couple of scenes that stand out to me as examples of this.  The first is a phone conversation between Carol and Steven, discussing something about the baby or something.  Just a regular phone call but the movie jumps back and forth between McConaughey sitting out somewhere and Beckinsale’s mouth.  The kind of framing you might use if the two of them were having phone sex and not just an innocuous conversation about toast or something.  The second was brought to my attention by my friend Forty.  The movie chooses (strangely) to jump from the happy wedding day of Carol and Steven right into the birthing suite after the baby has been born and they are talking to the doctor about their dwarf baby.  Whether it was because they chose not to show any of the normal things one would expect in order to lead the audience to the conclusion that the baby was being born (going to the hospital, the birth itself, what have you) or whatever it was, Forty would not wrap his mind around the fact that this was not a dream sequence.  The third is the end of the movie.  Rolfe and Carol have become more close as he’s been there for her when his brother was not, Carol tells Rolfe “You can kiss me if you want” and he does … and the movie ends.  A VERY strange place to end the movie, not giving the audience any sense of closure whatsoever.  Did Carol work it out with her baby daddy Steven?  Did Rolfe become the father Steven couldn’t?  Did the baby explode?  You figure it out, audience!

As for the performances, the only stand out performance is Gary Oldman as Rolfe.  He did this performance by kind of hunching his back up and walking around on his knees, Dorf on Golfing style.  But, Gary Oldman being the great character actor that he is, he made it work.  The strange thing was the choices the director or editor made in showing his real dwarf stand in all the time.  They would show scenes of this dwarf getting up onto the couch or walking up a walkway a lot just to say “Remember, Gary Oldman is a dwarf here” way more than necessary.  The audience wasn’t the dumb one here, filmmakers.  But Gary Oldman did great in the role as Gary Oldman tends to do, but it got me thinking: How many normal roles has Oldman played in his time.  The most human and normal roles I’ve seen Oldman in were a comic book movie series and a series of witchcraft movies.  But he’s awesome so I let it slide.  McConaughey and Beckinsale did what they did in this movie.  McConaughey had to get those abs out at one point, of course, and Beckinsale spent most of the movie just being hot and good enough.  And the reason I haven’t mentioned the feuding couple in this movie, Lucy (Patricia Arquette) and Maurice (Peter Dinklage, who you may recognize from Elf and an episode of 30 Rock), is because there was literally no point to them in this movie.  They did nothing to move the plot along and, if anything, served only as a vague attempt at comic relief.

In conclusion, this is a totally wacky movie with a good heart to it’s premise and really poor execution, turning a movie that could have had a good message in to joke fodder.  I give this movie “You should see this just so I’ll have more people to complain about it with” out of “What the hell was that?”