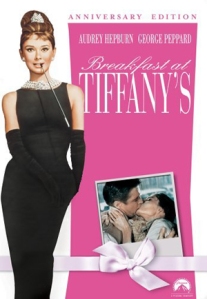 My sister requested a movie review a while back that I finally got in from Netflix and finally got a chance to sit down and watch.  I assume that it was more of a “torture my brother” type thing, much as her other request, Sex and the City, but I am up to any challenge.  Breakfast at Tiffany’s stars Audrey Hepburn, George Peppard, Buddy Ebsen, and Mickey Rooney.  Everyone else in the cast I don’t recognize, either because they weren’t really famous or because they probably died years before I was born.

I will probably have a bit of trouble with this summary as I could barely follow this movie, but here goes.  Breakfast at Tiffany’s is a story about a girl named Holly Golightly (Audrey Hepburn) who likes to eat her early morning meal in front of a certain high-end jewelry store.  If names this blunt are allowed I can only assume the movie about my life will be called “All Day at the Xbox”.  Well Holly meets a guy that just moved into her apartment building named Paul Varjak (George Peppard), a writer on hard times.  Holly makes her money by passing coded messages from a mobster regarding his drug ring.  She has parties all the time and is a bit of a free spirit and Paul is more reserved, but the two decide they should be friends anyway.  Not long after their meeting, Paul meets “Doc” Golightly (Jed Clampett himself, Buddy Epsen) who identifies himself as her husband.  Holly explains to Paul that their marriage was annulled, I assume because she was 14 when they married, and they send Doc on his way back home on a bus.  Paul starts to develop feelings for Holly but she is having none of it because her plan is to marry a rich guy.  Eventually she decides she’s going to move to Brazil for this rich guy named Jose, then she finds out her brother died while in the Army, then the drug thing comes back to bite her in the ass and she gets arrested.

I understand that this movie is a classic and iconic movie in many ways.  Having never seen the movie, I still recognized many things from it and was fairly familiar with it before I actually watched it.  That being said, I spent the greater majority of this movie not knowing what was going on.  I assume one could say the central idea of the movie is Holly and Paul getting together but then there’s all these strange little side plots going on there like Holly’s many relationships, Paul’s relationship and job, the drug thing, there was a cat in there, and someone put the telephone in the suitcase.  I understand the movie, but honestly cannot work out it’s appeal.  The comedy of the movie wasn’t funny to me but, being a movie that’s almost double my age, that is understandable.  I don’t know much about this time or how movies were handled back then.  Adding to that the fact that this is a chick flick and considering I’m not that old and male, I figure this is just not my type of movie.  Not to say that this movie is horrible, I just don’t get it.

The performances were all well done, at least from what I understand of how people acted back then.  Audrey Hepburn’s character annoyed me at times, but she was still so charming that I couldn’t hate her for it.  George Peppard acted exactly as I expect people in 60’s movies to act.  Buddy Ebsen has a small but emotional part to the movie.  The Mickey Rooney part was the part that caught my attention, mainly because I had seen it before and wasn’t sure back then what movie it was from.  In Dragon: The Bruce Lee Story, he goes on a date with Lauren Holly to see, apparently, this movie, but left when they saw Mickey Rooney’s stereotype Asian character, especially problematic because Mickey Rooney’s white.  I certainly wasn’t offended by it, but I’m a racist.