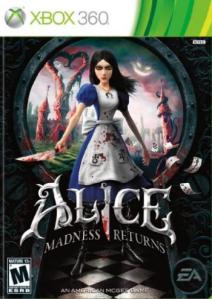 I’ve decided that I should finish the month with all horror related reviews. So, October Horror-thon continues, this time with a game that I would call quasi-horror. Alice: Madness Returns is the sequel to the 2000 PC classic game I never played called American McGee’s Alice. It was supposedly very good, but I figured it was not worth downloading because all the reviews of it I read talked about how the game was mediocre and it was made by it’s graphics. And since it’s graphics are 11 years old, I figured that meant there was no reason for me to buy it. But this isn’t about the original, this is about the sequel. Alice: Madness Returns is brought to us by Spicy Horse and publisher, Electronic Arts.

From what I gather, the first Alice game basically takes the classic Lewis Carroll books and makes it about Alice going insane, and everything being a lot more gory and dark than Carroll intended. During the first game, Alice Liddell goes insane, believing that she was responsible for a fire that destroyed her house and family. She constructed her twisted version of Wonderland as an escape, believing herself to be the titular character from Carroll’s books. A year has passed since the events of the first game. Alice lives in an orphanage in London under the care of Dr. Angus Bumby. Bumby uses hypnotism to try to make people forget their memories and has tried this on Alice. Alice believes herself to be free of her madness, but her trips to Wonderland still happen occasionally. On a trip to Wonderland, she finds that it is being destroyed by the Infernal Train. Jumping back and forth between Wonderland and reality, Alice tries to recover her memories and stop the corruption of Wonderland.

This is certainly an odd game, but I’m hesitant to call it good or bad. It seems that the things I read about the first game – that it had a great art style but repetitive gameplay – fit well into my ideas about this game. The art style certainly is interesting. The first level is probably the best looking, and maybe the dollhouse level. The first level looks much as you’d expect Wonderland to look, similar to the Tim Burton movie. It’s a lush forest with large, colorful mushrooms and other such things. The dollhouse level is what it sounds like. Also, the card bridge that leads to the queen’s castle is pretty nice, being comprised of cards that appear before you as you walk far up in the sky. The other levels, and even the second part of the queen’s castle level, are pretty bland and looked alike. I think the biggest problem for me was that the levels were too long and got old pretty quickly. Also, every character besides Alice is horribly ugly, so she must have her pick of the mens of London. The other characters are the forgettable Mad Hatter and March Hare, the Walrus and the Carpenter, the Red Queen that now has the face of Alice’s dead little sister, and the Cheshire Cat. The Cheshire Cat shows up and gives confusing riddles on solving upcoming puzzles. I never figured out his clues, but the puzzles were easy so I didn’t need it. At one point, he just says “Be Careful, Alice.” Thanks, dude. Alice also changes outfits a lot for no reason and without explanation. In the real world, she wears prison stripes and an apron, and in Wonderland you usually start off with the typical blue dress and then inexplicably change into a more emo or goth outfit.

The story is pretty strong here. I like the new twist on Alice and probably would’ve liked the original Alice back in 2000 had I played it. Finding out what actually happened in the fire was pretty cool and the resolution was pretty nice and unexpected (as well as being very dark), though Alice is rewarded with a happy ending at the end. I’d have more fondness for the game if it wasn’t spread so far apart by really long, boring levels. Also, for achievement hunters, this isn’t a good game for achievements. After I beat it, I only had just over 400 out of 1000. There are a holy shit ton of collectables in this game; some are memories that give you a tiny bit of back story, some are pig snouts you need to pepper to access another hidden area (yeah, I don’t get it either), some are random bottles that seemingly serve no purpose, and some are bottles of rose paint that increase your total health. This game, for some reason, uses teeth as the currency for upgrading your weapons, and you collect those everywhere.

The gameplay, as previously indicated, gets pretty repetitive. You have a typical hack and slash scheme that X is your weak/fast attack (the Vorpul blade that is basically a Ginsu knife) and Y is your strong/slow attack (a hobby horse). You’ve got two ranged attacks, the pepper grinder (which is like a machine gun) and the tea pot (which is like a bazooka or mortar). I found that this basically devolved into breaking their guard with the heavy attacks (tea pot or hobby horse) and then just smacking the crap out of them with the fast attacks. The enemies were mostly just blobs of black ooze in various sizes with doll masks stuck to them. So that got pretty repetitive within the first level, and then there was 5 more of the same. There’s also a good deal of platforming here. Alice was capable of doing multiple midair jumps, hovering when you hold the jump button, and also using the shrinking potion to reach smaller areas and see things you couldn’t see as slightly bigger Alice. It was fun at first, but I had problems with my button presses not being recognized quickly enough and leading to me plummeting to my death, especially in the later levels. Perhaps they got as bored designing it as I did playing it. There were interesting mini games that remained fun because they weren’t overused. You enter a painting at one point and it turns into a side scrolling platformer. You turn into a doll head and run through a side scrolling pinball type game. And at one point you also eat the cake and grow to a giant, smashing enemies. There’s also a shitty chess type game and a couple times when you have to play one of those awful puzzles with the one open spot and you have to move squares to make a picture. I hate those.

So that’s that on Alice. Somewhat pretty game, interesting concept, good story, really boring and repetitive. The game’s still $40 at the time of this review, and I can’t really recommend it for that. For $20, maybe. I’d just rent it if you’re interested enough. If not, you’ll be fine. I give this game “My madness is much more interesting than this” out of “Waffles”.