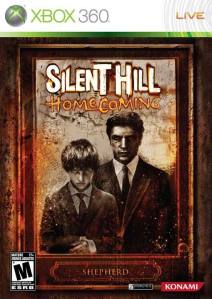 October Horror-thon continues, this time with a game.  I had noticed while playing another horror game that I actually had a few horror titles in my stack of unplayed games and decided that I should knock them out.  Today’s game is another addition to the long running horror series, Silent Hill: Homecoming.  Strangely enough, the ravings of how awesome some of these games were never really reached me and, to date, the only experience I have with the Silent Hill series is this game and the movie.  Probably not a pedigree that would be appreciated by Silent Hill fans.  But let’s jump in, with no ideas about the history of the series, to Silent Hill: Homecoming, developed by Double Helix Games and published by Konami Digital Entertainment.

You wake up strapped to a bed, but not in a good way.  You’re Alex Shepherd, a discharged Special Forces soldier being wheeled down a dark and grimy hospital by an orderly with an extremely short lifespan.  You get locked in a room, still strapped to a bed, and watch as a gigantic sword goes through the stomach of the orderly and cuts him clean in twine.  Well, it wasn’t really that clean.  You free yourself of the bed and make your way through the hospital until you see a little boy coloring a picture on the floor.  Turns out that’s your little brother, Josh, but he ignores your calls to him.  Making your way through the hospital, Josh runs away any time you get close to him without acknowledging you.  In a bathroom, you find two staples of the Silent Hill series, perhaps 3.  The first is the knife you pull out of the mirror.  This is a staple because Silent Hill has always supplied you with barely any ammo and leaves you with mainly melee weapons and barely a chance in Hell for survival.  Pulling that knife out, you find another staple: the area you’re in mysteriously disintegrating into a dark, twisted version of itself.  And out of the stall comes my favorite staple, the sexy/spooky nurses with the covered faces and penchant for using their knives.  Chasing Josh more, you eventually find out the whole thing was a nightmare and you’re actually hitchhiking to your home town with Travis Grady, the protagonist from Silent Hill: Origins.  And that’s just the first 20 minutes!  You arrive at Shepherd’s Glen to find the whole town practically deserted and covered in fog.  But you will not be deterred from finding your little brother.

This was a pretty good game, and I’m only partially sure that I don’t think that just because the last game I played was so awful (I’m looking at you, Alone in the Dark!).  But it was actually an enjoyable game.  It does take the easy way to scares from time to time in making things pop out at you, but the majority of it’s ability to scare you is because those startling moments are prefaced by a really dark and spooky atmosphere.  Everything works towards this goal.  You can usually only see about 10 feet in front of you because of the fog or the darkness at any given time.  And sometimes, it’s better that way.  Because a good portion of the visuals you see are mutilated corpses, things crucified in some strange pagan ritual, or things coming to kill you.  The sound is very helpful to the cause of creepiness.  It’s usually very quiet but your radio will start playing static if enemies are nearby.  And occasionally you can hear the dragging of the giant sword of a Silent Hill staple called Pyramid Head (though this game calls him the Bogeyman) and he’s about as creepy as they get.  I think it pulls these things off very well to make a pretty creepy game.  And I don’t know who decided that little girls singing lullabies was creepy, but they were right.  That shit freaks me out.

The gameplay even adds to the creepiness and fear in this game.  It controls pretty smoothly and without much difficulty, but the problem is the fighting.  It’s creepy to think there is danger around every corner (and occasionally being right) when all you’re packing is a knife, a crowbar, and an axe.  Maybe a couple shots of your pistol, but you hold on to those because you don’t know if something worse is around the next corner.  Ammo is scarce (as it probably should be to add to the choice of fighting or flying) and you must resort to either cowardice or melee.  Being a man with a penis and everything, I couldn’t go running from a fight.  My penis would leave if I did that!  The fighting was solid but the dodging was occasionally difficult to get the hang of.  And that means you’ll take a lot of damage.  Unless I just wasn’t searching as well, they supply a ton of health packs in the beginning, barely any in the middle, and then way more than I need near the end.  I was overflowing with health in the beginning and end but desperate for it in the middle.  Of course, if you do it right and get the right one of the 5 endings, you unlock a powerful laser pistol with infinite ammo for the second playthrough.

The characters of Alex and Josh both looked good, but I found that not as much care went into the look of the rest of the characters.  Those are the two you see the most, so it makes sense, but sometimes the other characters lost their realism and occasionally forgot to match the words to the mouth (or move the mouth at all).  The monsters were all well done and mixtures of creepy and disgusting.  I like to see Pyramid Head come back, but bummed that you don’t get to fight him.  Although I think the character is supposed to be immortal or something, so I don’t know how well that’d work.  But he could’ve at least raped something.  That’s his thing!  He rapes dead things and kills living things!

Overall, I thought this was a pretty satisfying game experience.  Pretty creepy, decent story, fun to play; it works.  As far as achievements go, it’s not that bad.  If you set your mind towards 2 playthroughs minimum and use the first one to get the laser, you can finish all the rest in the second playthrough with not much difficulty.  Just haveta look out for a good amount of collectables, which you’ll be doing anyway because of your desperate need for health and ammo.  I give this game “Creeptacugood” out of “Goretabulous”.