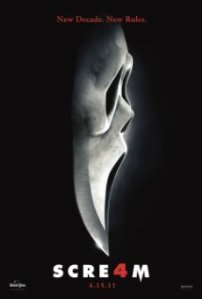 Let’s get recent with today’s October Horror-thon, eh?  Today’s review is of the fourth part of a very popular horror film series that I had little to no interest in.  I saw the first one and probably the second, maybe even the third, but they all kind of blurred together into a large pile of blah.  But they remain popular and there’s nothing I can do about it.  Except, perhaps, to bad mouth them on the internet.  I can do that.  I’m talking about Scream 4, or Scre4m if you fancy, directed by horror legend Wes Craven, starring Neve Campbell, David Arquette, Courtney Cox, Emma Roberts, Rory Culkin, Hayden Panettiere, Marley Shelton, and Alison Brie, with notable cameos by Kristen Bell, Anna Paquin, Adam Brody, Anthony Anderson, and Heather Graham.

This movie starts with two teen girls alone in a house, they get a famous call and get killed.  PSYCH!  It’s actually two girls (Kristen Bell and Anna Paquin) watching THAT movie, and then Kristen Bell kills Anna Paquin.  PSYCH!  That’s a movie two.  This goes on for 4 and a half hours and then they decide to stop dicking around and start their movie.  And it starts with someone getting a call and getting killed.  Sigh.  Sidney Prescott (Neve Campbell) has decided to return to Woodsboro to promote her book; numerous near-death experiences and lost loved ones be damned!  It’s probably to be blamed on her publicist, Rebecca Walters (Alison Brie).  Sidney is instantly a suspect because logic was not supplied to this movie.  Sidney’s cousin Jill (Emma Roberts) and her friend Kirby Reed (Hayden Panettiere) also get a call from deceased member of the Wutang Clan, Ghostface Killa.  Okay, it’s a different Ghostface, but he also ain’t nothin’ to fuck with.  Jill and Kirby are taken to the police station and questioned by Dewey Riley (David Arquette), now a sheriff, and one of his deputies, Judy Hicks (Marley Shelton).  Dewey’s wife, Gale (Courtney Cox), decides to take up the case behind his back.  A lot of people die, convoluted story, yada yada yada, the end.

Okay, some might have grasped from the manner I’m typing in that I had some problems with this movie.  It was nowhere near as bad as I expected, but I also could have done without.  And what’s worse is that I would’ve liked the movie better if they didn’t go with the opening they went with.  There were seriously about 4 false starts on this movie.  That part was not a joke.  They literally did that similar scene over and over and over again, so much so that, by the time they had actually started their movie, I didn’t believe it was happening and therefore had no problem with the girls getting killed.  It was so bad that I thought I had accidentally RedBox’d Scary Movie 5 or something.  And this opening annoyed me so much that the rest of the movie had to struggle to make a slow climb back up to me calling it mediocre.  You probably shouldn’t make such a point of trying to be “meta” by making your characters in your movie talk about how not scary movies are when they go with gore and startles instead of scares because (guess what?), they’re right!  And now you’ve made me think about it and made me aware of what I’m in store for.  After that, as I mentioned, the movie got a little better and brought itself back to mediocre with some decent dialogue, good kills, and hot Hayden Panettiere.  And then they kind of ruined it for me with the ending, which I thought was farfetched even for a horror movie.  And there was a death by defibrillator in this movie!  That was pretty much just laughable and – let’s say – poorly placed.  And they also went with the death by garage door in this one, which they either have done in Scream before, had done in Scary Movie, or both.  I definitely remember it in Scary Movie.  This is problematic because it was a repeat, but also problematic because I don’t think I’ve ever seen a garage door that didn’t feature a sensor that would’ve stopped that from happening.  Also, if I may offer a humble recommendation, you probably should not show the people in your movie watching a far superior movie so that the audience can compare your movie to it and have yours fail.  They had some characters watching Shaun of the Dead and it just made me think “Wow, that movie was way better than this one.”

The performances were various shades of okay.  I would say everyone did fine and the only people that stood out were Hayden Panettiere, Emma Roberts, and Alison Brie for their respective hotnesses.  Neve Campbell offered a fair performance in this movie, but there was a part where she ran into a house after the killer completely alone and unarmed.  Did you learn nothing from the last 3 times this happened?  If I lived through a murderer even once I would feel justified in carrying a gun on me at all times.  I typically find Anthony Anderson funny in the movies I see him in, but he was pretty reserved in this movie and didn’t offer very much funny.  And I did not understand his last line of “Fuck Bruce Willis” at all.  I don’t know if that’s a joke I was meant to understand or if it was intended to be a non sequitur, but I didn’t get it.  And the chick in the yellow shirt had a pretty bad death scene performance in one of the 87 opening false-start movies.  That’s all that really comes out of the performances in this movie for me.

So that’s Scream 4 for you.  It’s far from a great movie, and I’d say far from a great movie series, but this one is probably the second best of the series, at least as far as I can remember.  It’s watchable as long as you mentally prepare yourself for the jackassery that opens the movie.  I’ll give this movie “Don’t fuck with the original” out of “Clear!”