I Feel Blue … BECAUSE of You 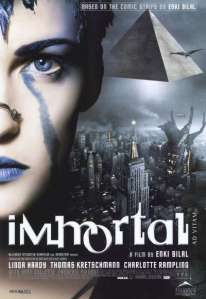 Um … I … um … well … hello?  I’m sorry, audience, I can’t really think straight right now.  I’m not really sure what’s going on.  I remember getting home from work with a DVD that was given to me by my coworker Fabio, that was given to him by our coworker Samrizon.  I made dinner and popped in the DVD and then … well … the world just stopped making sense.  For a moment, I was completely lucid and then, suddenly, gone.  But I’m here now, and I’m typing, so I assume I watched this movie and am now reviewing it.  We’ll find out how true that is together, in my review of Immortal, based on the comic book La Foire aux Immortels (The Carnival of Immortals) which were written by Enki Bilal, directed by Enki Bilal, and starring Linda Hardy, Thomas Kretschmann, Thomas M. Pollard, Charlotte Rampling, Frederic Pierrot, Yann Collette, and Joe Sheridan.

New York City, in the year 2095, is a place comprised mainly of genetically altered humans.  Also, there’s a giant, floating pyramid with the gods of ancient Egypt living inside.  The other gods decide that Horus (Thomas M. Pollard) should not be immortal anymore, so he decides he needs to repeatedly rape a chick with white skin and lettuce on her head, Jill (Linda Hardy), from inside the body of a recently escaped prisoner, Nikopol (Thomas Kretschmann), until she gets pregnant.  Lettucehead has special powers too, but does not possess the mutant ability to not get raped.  She gets pregnant and leaves, forgetting everything that happened.  Nikopol later finds her on top of the Eiffel Tower and she recites poetry at him in French.  …That is the whole movie.

Judging by the reactions I’ve taken from the two other people I know of who have seen this movie, I’m reasonably sure that the fact that I have no idea what I just watched is not due to my own stupidity.  What the fuck is going on in this movie?!  The story is completely scattershot, making little to no sense whatsoever, and seemingly reveling in it.  I tried asking Fabio what this movie was about, but he had no more information than I did.  Even Wikipedia had only a paragraph of vaguely comprehensible information about the plot.  And it’s not like I didn’t understand it because French people made it.  The movie was in English!  Some of the graphics in this movie looked pretty good, but some of them were abysmal.  I will ATTEMPT to talk about the story of this movie.  It’s a pretty typical story that we’ve all seen a million times about a god that rapes a girl with lettuce on her head.  How played out, movie!  I’m actually at a loss for words about this movie’s story.  I don’t know what any of it was about.  It just seemed like a series of random scenes thrown together.  Occasionally, they’d throw non-sequitars on top of their already confusing movie just to confuse me further, such as a random scenes of penguins walking, turning into humans, climbing through a wall, and then re-emerging as bones.  I seriously can’t say anything more about the story.  Let’s talk graphics.  Meh.  The opening graphics are pretty strong, showing a ship of some sort flying towards a dystopian New York City, but it was so bleached by bright light that it probably masked the imperfections.  Then, Horus makes two helicopters smash together for no discernible reason, but they kind of just bump gently into each other and explode into flames.  A short amount of time into the movie, we see the real awfulness we’re in for: full CG characters.  Do you remember how bad Polar Express was because they had gotten on the wrong side of the Uncanny Valley?  The CG characters in this movie are just as creepy, but nowhere near as well done.  And the worst part was that they weren’t necessary at all.  I don’t think we’ve yet reached a time where CG characters are cheaper than hiring real actors (especially since you need to hire actors to voice them), but this movie made a character CG seemingly to avoid putting the very small amount of makeup on them to match what they did in CG.  Most of the characters that they went CG with just had multiple skin tones on them, and I could recreate that level of quality for under $5 and a quick trip to Walgreens.  Then they can’t decide whether they want their movie to be shitty, real actors, or super shitty CG ones.  Instead of deciding, they just did both.  The full CG scenes made me think they would have been perfect in a Playstation 2 game from 10 years ago, but were extra bad in a movie I was watching today.  Granted, the movie was made in 2004, but it was also a movie.  At least I think it was.  It could have just been a really abstract Silent Hill game.  Both the CG performances and the voice acting applied to them were just awful, especially the fat guy with clown makeup that really had nothing to do with anything that was going on in the movie.  The red, Hammerhead shark-looking guy would have been pretty intimidating if he didn’t talk, but he did, and it looked like he may have been speaking with not much more control than a hand puppet.

The performances weren’t the worst thing ever, but they really made the attempt to overthrow whatever was the worst thing ever.  I guess that would be either the Holocaust or 9/11.  They weren’t THAT bad.  Linda Hardy didn’t do that bad as Lettucehead, and did manage to get some blue-nippled tits out, but it was hard for me to give a shit about her boobs when her hair looked like lettuce.  Blue hair slowly grew out of the Lettuce, making her somewhat more attractive, but I was pretty much done by then.  Thomas Kretschmann got on my nerves most of the time.  When first we met him, he pretty much exclusively whispered, making me strain to try to hear the shitty dialogue he was spitting out, which is a double bad thing.  The rest of the time, he tried to force the shitty dialogue out through an accent that made me think he was the love-child of Jean-Claude Van Damme and Arnold Schwarzeneggar, and as I understand it, Arnie will fuck almost anything, so Kretschmann may be just that.  He also spits out a lot of stupid things, but that’s more the fault of the writer.  At one point, his arm is stained blue by Lettucehead’s tears that she filled a bathtub with (did I mention this shit doesn’t make sense?), and he says “I feel blue for you.”  What the fuck does that even mean?!  Thomas M. Pollard, who voiced Horus, sounded like the rejected voice of the Movie Phone guy.  He used that voice to retort when Nikopol says “Fuck you!” after the first raping of the Lettucehead with, “Right, but let’s fuck her again first.”

Altogether, I’d really like this movie … to never be in my house again.  It’s really stupid, impossible to follow, but somehow captured my attention.  Best I could figure, it was kind of a like a train wreck.  It’s horrible, but you can’t help but look at it.  You will probably have no idea what is going on, but you may occasionally not hate looking at it.  You will on almost every occasion where a character is computer generated, though.  I have no idea what the movie was about, but I do know that you should not watch it.  Immortal gets “I should have shot you when I first met you” out of “I’m a professional guinea pig!”