Be Careful When Eating Soup! 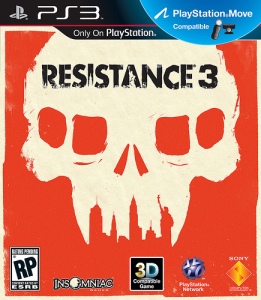 Having not been impressed with the previous 2 installations of the Resistance franchise, I found myself hesitant to purchase the third.  But, as with many games near the end of 2011, when I saw it on sale on Black Friday, I could hardly restrain myself.  The game remained one that I had little interest in playing, but three months of owning it finally drew me to it … when I ran out of other games I wanted to play.  It’s been talked up to me by the greater majority of reviews I’ve read for it, but so were the first two games.  Let’s find out what’s really important (aka how I feel) in my review of Resistance 3, developed by Insomniac Games and published by Sony Computer Entertainment.

Four years after something called Operation: Black Eden, we play someone by the name of Joseph Capelli, a soldier dishonorably discharged from something called SRPA for executing someone named Nathan Hale.  I think Nathan Hale is the character we played in the first two games, but I have no recollection of any of the rest of that happening.  As I said, I was never a fan.  Either way, we live in Haven, Oklahoma with our wife, Susan, and our son, Jack, trying to hide from the Chimera (the big bad alien threat) with other survivors.  Eventually, our sanctuary becomes jeopardized, forcing everyone to evacuate.  With the help of some scientist we’re probably supposed to know, Dr. Malikov, Joe reaches the decision that he wants to do something more than hide and so, with Malikov in tow, Joe leaves his wife and kid to go destroy one of the Chimera Terraformers that are threatening our planet.

Some of the problems I had with the previous Resistance games were still present, but this was still a pretty damned good shooter.  The story was surprisingly good and had some pretty emotional moments within.  It’s still set within a alternate reality version of 1950’s America, which is a vaguely interesting concept, but it doesn’t really make any difference when the greater majority of the weapons are alien and futuristic anyway, leaving you to see very little to indicate that you’re in the 50’s.  But the story of the game is still pretty engrossing.  Your family gives you more of a reason to fight than the usual “mad as hell and not going to take it anymore”, or just simple survival, but a little more time could have been dedicated to connecting the audience with that family.  They’re only in it for the beginning of the first chapter, then just mentioned a lot until the end, usually taking the form of your son’s mitten that you carry around.  The setting then takes you plenty of interesting and diverse places, letting us see many different ways that the humans are coping with the Chimera menace.  You come from a fairly normal contingent, but you come across a more militant group, a super religious group, and even former prisoners that now just kill people, seemingly at random, along with the Chimera.  One thing that stuck me as weird came from the opening cinematic that attempted to catch us up with the story (though it apparently didn’t work on me).  The only part of it I paid attention to was a small bit of it that seemed to indicate that the Chimera virus started when a yellow orb fell from the heavens, landed in a guy’s soup, and was then eaten by him.  Is that really what you came up with for the start of this thing?  Food poisoning?  Maybe I should’ve just paid better attention.

I don’t have too much to say about the graphics beyond the fact that they’re nice.  Everything looks pretty great with no problems that I saw.  The closest thing to a problem actually came from too much realism.  In the dark parts of the game, your character’s flashlight would pop on to help you see.  The problem was that the flashlight looked too much like a real flashlight.  Let me try to explain this: have you ever used a flashlight that was adjustable?  When you twist it in one direction it will close to the center, but in the other direction it will spread out and create a part in the very center that isn’t lit.  Our flashlight does that in this game.  It’s annoying because the center is the part where you NEED to see the best, being the part that you’re aiming at and probably trying to look at and/or shoot.  But that’s a minor problem.  The settings were all great and varied.  You start in a pretty basic farming community, then you apparently transport to Louisiana and onto a boat traveling through a flooded town.  You go through cities, rural communities, at both night and day, in desert and winter.  You even pop into a prison for a spell.  And, of course, it all wraps up in a futuristic Chimera spaceship looking place.  All good looking.  Sometimes I did have a few problems with the sound, but mainly only that I would fire and it would make the sound a few seconds after, but that’s another minor gripe.

The controls are the biggest problem I have with this game, but the problem is probably more me than the game.  I just don’t enjoy playing shooters on the PS3.  The controller never felt right for shooters to me.  Unfortunately, this game is only available on the PS3, so I have to grin and bear it.  The analog sticks don’t feel right to me and the buttons feel almost gummy and weird.  That being said, the controls felt better here than they have on any other PS3 shooter I’ve played.  The best thing about the gameplay in this is the guns.  Insomniac is known for innovative and interesting gun types, and this game is no different.  Oh, they’ll give you the basic pistol, shotgun, machine gun nonsense, but they change it up too.  They add plenty of fancy guns like the Auger that can shoot through walls, the electricity-blasting Atomizer, the infection-causing Mutator, and the freezing gun (that, contrary to popular beliefs left for us by Batman & Robin, does not require you to speak in horrible ice-puns).  On top of that, they give each weapon an alternate fire.  The pistol bullets explode when you press R2, the carbine shoots a grenade, the shotgun shoots a concussion grenade, etc.  The thing that I loved that they added to this game was that you could level up your weapons.  Use the shotgun enough and the bullets turn incendiary.  Level up the Bullseye and the bullets will explode on impact.  The only thing I didn’t like about leveling the weapons was that there were only 3 levels.  If they’d have kicked that up to 5, it would’ve made me play for a lot longer.  The next biggest problem I had with the game was the health system.  In Resistance 1 & 2, your health would recharge if you kept out of danger for a while, as with most shooters.  It feels like it’s been a long time since I last had a set amount of health and needed to look for health packs.  I’m not a fan of this, especially in this game where the difficulty would amp up pretty harshly in parts and I could never find health, although the checkpoints are plentiful so it never becomes that annoying.

The trophies for this game won’t take you that long.  I’ve achieved the bulk of them in about 3 days.  They’re a little time consuming, and some of them are pretty tedious, but mostly not that difficult.  They have the basic ones that you get for leveling up weapons and killing enemies with certain weapons, but they have some stupid ones like throwing a grenade through a basketball hoop and finding a sock puppet and shooting it.  Some of the tedious ones are the ones that require specific timing, like freezing, igniting, and poisoning an enemy at the same time.  I haven’t attempted it yet, but I’ve read that the hardest difficulty can be a chore, but you should be used to such requirements if you’re an achievement/trophy whore.

I was surprised to find that I thoroughly enjoyed the third installment of a game series that made such little impact as the Resistance series has thus far, but it happened anyway.  Great story, good controls, excellent guns (and the ability to improve them), and fantastic and varied graphics make this a game that should be played by anyone who owns a PS3.  Resistance 3 gets “To uncover the Chimeran plan, I must look to their history” out of “I want more green crayons.”