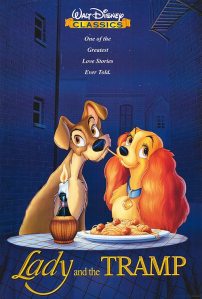 My roommate and coworkers strike again.  When this movie was re-released on DVD and BluRay, my coworker Ashley said that I needed to review this movie.  I would normally have said “OH NO!”, but it was an official request, so I needed to.  It’s not that I have anything against today’s movie, but I get nervous when watching movies that I really liked as a kid because watching it today tends to ruin my fond memories of these movies.  But I had no choice, so I went to my roommate (who is the authority in this house on movies almost twice our age) and borrowed this movie.  Today’s review is of the classic Disney movie Lady and the Tramp, written by Erdman Penner, Joe Rinaldi, Ralph Wright, and Don DaGradi, directed by Clyde Geronimi and Barbara Luddy, and including the voices of Barbara Luddy, Larry Roberts, Bill Thompson, Bill Baucom, Stan Freberg, Verna Felton, Alan Reed Sr., George Givot, Dal McKennon, Lee Millar, and Peggy Lee.

As a Christmas present, “Jim Dear” (Lee Millar) gives a Cocker Spaniel puppy to his wife, “Darling” (Peggy Lee).  Being a very imaginative person, Darling looks at the gender of the puppy and names it “Lady” (Barbara Luddy).  At first, Jim Dear attempts to treat Lady like a dog, leaving it downstairs in the kitchen, but Lady’s persistence and whining gets her a spot on the bed.  Soon, Lady is sleeping exclusively on the bed.  Lady gets her first collar and license at 6 months old, and goes to show it to her friends, a Scottish Terrier named Jock (Bill Thompson) and a Bloodhound named Trusty (Bill Baucom).  Later, Lady is perplexed that her humans are acting strangely.  Jim Dear seems preoccupied and leaves in the middle of the night on strange requests from the missus, and Darling is unable to play with Lady anymore, being preoccupied knitting tiny boots.  Turns out, Darling’s pregnant.  Eventually, that baby pops out and Lady takes to being the baby’s protector.  But, one day, Jim Dear and Darling must leave for a little while, leaving the baby and Lady in the hands of Aunt Sarah (Verna Felton).  With her comes two shitty little Siamese cats that get Lady into trouble.  Aunt Sarah takes Lady to get a muzzle, but Lady escapes and runs afoul of three vicious dogs, only to be saved by the street wise mutt Tramp (Larry Roberts).  Tramp woos Lady with spaghetti, and later tries to talk her out of returning home, where she’ll be caged.  Will these star crossed dogs end up together, or will a Disney movie not have a happy ending?

Thank goodness!  This movie managed to hold up to my expectations.  The story in the movie was pretty classic, but overall enjoyable.  It’s fairly close to Romeo & Juliet, but with dogs and a happy ending.  Other dogs don’t like Tramp because he’s (literally) from the wrong side of the tracks, and has apparently had a long and storied history of hookin’ up with lady dogs, but the love he and Lady have for each other – and his ability to kill really sinister looking rats – conquer all in the end.  There were somethings that stuck out as weird in the story, though.  The first thing was that this movie is completely disgusting.  By my math, at 6 months, Lady is only the equivalent of three and a half years old, far too young to be canoodling with the Tramp.  She’s just a baby!  After that, I was really confused by the fact that Jim Dear was saying there was no way to know what the gender of the baby was before it was born, and then I remembered that this movie was made in the 50’s and set in 1910.  It took me a while to realize that they actually wouldn’t have been able to tell back then.  For another sign of the times, those Siamese cats were very racist stereotypes.  They had the classic buck teeth that were always given to Asian people, had Asian eyes, and their L’s turned into R’s.  It’s just amusing to watch movies from back in the day, when blatant racism was not just acceptable, but required.  The greater majority of the dogs were stereotypical.  There was a really Mexican Chihuahua, Jock the Scottish Terrier, a German Dachshund, and some Russian dog of some kind.  They did have an English Bulldog, but it didn’t have an English accent or anything.  This dog was, of course, my favorite.  It won me over in the song about the Tramp when he was walking around singing “Bum bumbum Ruff!”  Adorable.  Also, that dirty bitch Aunt Sarah made me mad.  First, she kicks Lady out when the baby actually likes Lady, then tries to muzzle her, then blames the Tramp for knocking over the baby … okay, that WAS his fault.  Not cool, Tramp.  But the baby was okay, so it’s all good.  Just MILDLY brain damaged.  Only bad enough to grow up to like the Insane Clown Posse.  But the rest of that stuff was all that bitch Sarah.  When Jim Dear and Darling left, did they not think to add, “Oh yeah, and please don’t be an abusive bitch to our dog.  She’s nice with the baby,” or something?  Also, dogs can’t whistle, movie!  I need a little bit of verisimilitude in my movies about talking dogs!

The animation, though somewhat dated, still holds up.  You can see that obvious animation thing that used to happen in most hand drawn movies where you can see a clear difference between the animation cells and the backgrounds.  They do super detailed, intricate paintings for the backdrops, and then put more hastily animated cells on top, ones that are usually not shaded the same as the backgrounds.  This is noticeable, but both types of animation are so pleasant that you don’t really care.  Plus, it was how animation was done at the time, so you have to forgive it.  The animation on the puppies alone was so gundamned cute that you become instantly endeared to the characters.  Besides Lady, the adult dogs weren’t nearly as cute, but my God those puppies were adorable.  From my experience of a full life around dogs of some sort, I feel like their animation completely captured the mannerisms of dogs and pulled them off brilliantly … except that dogs cannot whistle.  Not at all.  My English Bulldog, Jabba, has occasionally made whistling noises with his nose, but only when he’s not stomping around singing “Bum bumbum Ruff!”

I’m very happy that Ashley did not cause me to ruin a fond childhood memory.  I have to work with this lady, and that would make it very awkward.  But it’s not something we have to worry about now because Lady and the Tramp is still a good movie.  There are some problems to be seen in the movie (most notably a couple occasions of racism), but it more than overcomes those with it’s charming story, adorable animation, and the overall warm feeling you leave the movie with.  Definitely something you need to watch, and probably something you need to own.  Lady and the Tramp gets “What a perfectly beautiful little Lady” out of “We are Siamese if you please.”