We Are Oddities of Nature, You and I 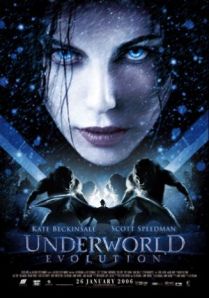 Continuing on into the Underworld makes me feel like Hercules or Dante.  Well, not really like Hercules, but I’m totally a poet like Dante.  That’s the facts, right there.  Also, that’s probably the smartest joke I’ll ever go for.  Let’s get back to talking about poop!  Underworld!  Okay, that was harsh.  Underworld turned out to be a pretty good movie, but one I remembered being better.  Unfortunately, I remember them going downhill pretty quickly into the third one, but I have not yet made my impression of the fourth one known.  Let’s see if that recollection still holds true as I review Underworld: Evolution, written again by a different Danny McBride than the one we are all thinking, directed again by Len Wiseman, and starring Kate Beckinsale, Scott Speedman, Tony Curran, Derek Jacobi, Brian Steele, Bill Nighy, Michael Sheen, Steven Mackintosh, Shane Brolly, and Zita Gorog.

Way back in the day, the three vampire elders – Viktor (Bill Nighy), Markus (Tony Curran), and Amelia (Zita Gorog) – are trying to track down Markus’ brother, William (Brian Steele), a werewolf who is going around making more Lycans that are savage beasts, unable to return to human form.  They finally capture William and have him imprisoned for all eternity, but Markus is not too cool with his bro-wolf being treated like a bitch.  Back to the now, the events of the last movie have set up Markus to awaken from his slumber, and he promptly kills the shit right out of Kraven (Shane Brolly) who, let’s face it, had that shit coming.  Elsewhere, the vampire Selene (Kate Beckinsale) and the hybrid vamplycan Michael Corvin (Scott Speedman) are driving around, occasionally stopping to fight things and fuck each other.  After killing Viktor, Selene is having memories pop of of when her father built the cage that holds William, so they’re looking for answers about that.  They stop in to see Andreas Tanis (Steven Mackintosh) and later look for the original immortal, father of Markus and William, Alexander Corvinus (Derek Jacobi).  All this time, Markus is also looking to free his brother.  Eventually, these two paths will probably converge.

This one’s probably about on par with the original.  The story takes a bit of a step down, being all about this chase to find some people’s jewelry that opens a sarcophagus restraining a big doggy.  It may even border on confusing, since everyone’s looking for the same necklace/ribcage bling (you’ll have to watch the movie to get that) and Selene barely knows what’s going on until her memories come back.  It’s constantly cutting back and forth between Markus and Selene to see what they were doing and I may have gotten confused, which may have not happened if I were paying more attention but, hey, that’s their fault.  Make a more interesting movie next time!  The action was a decent step up at times in this movie though.  There were a couple of solid fights and action scenes, and people actually tended to hit what they were aiming at.  I had a couple of issues with the climactic final fight of the movie though.  And, because it’s the final fight, I suppose there may be ::SPOILERS::  The fight is basically Michael and Serene versus William and Markus.  First off, Michael remains completely ineffectual, even though he’s the super hybrid.  I know he has no fight training or anything, but he basically just gets his ass kicked a lot.  He is the one that finally kills William by ripping his upper jaw off, and that was pretty badass, but I don’t know how much credit you can give him for beating William.  William is the super powerful first of all Lycans, but his strategy in this fight is to do a lot of standing in one place howling as he’s getting tons of bullets emptied into him.  Markus shows himself to be a pretty big badass by pulling a helicopter out of the air by the cable it has draped into the arena, and then goes to fight Serene.  They fight on a bridge with the still spinning blades of the helicopter right next to it.  Knowing that Serene is the heroine of this movie, you will never expect how their fight – stationed immediately next to spinning helicopter blades, mind you – will end.  It may shock you to find that he is knocked into the spinning helicopter blades.  Sure, you see it coming from a mile away, but it was pretty sweet.  ::END SPOILERS::  The look of this movie also improves a little.  The most notable improvement is that a pair of tits makes it’s way onto this movie.  Unfortunately, they aren’t Beckinsale’s.  Other than that, the Lycans are a little more convincing, and the amount of fake blood is probably doubled for this movie.

The performances were mostly by the same actors, so you can be assured that the performances have not changed drastically from the first movie.  Kate Beckinsale still looks good in them skintight suits, having decided against splurging on Haagen Dazs with her check from the first movie.  I thought it was strange that she kind of acted a little trepidatious about getting her freak on with Speedman, even though they had already had some good make out sessions.  I guess there’s a chance she was a virgin, though, so she might’ve been hesitant to give that up.  Everyone acted like the 40 year old virgin was so sad, but Selene could have been the 121 year old virgin for all we know.  Scott Speedman continued to not impress me.  I wanted this hybrid to be awesome, but he really never does anything impressive.  The most impressive thing about him is that he is constantly coming back from situations that should have killed him.  So can cockroaches, and I don’t call them badasses either.  Get your shit together, hybrid!  Tony Curran is the new, big baddie for this movie, and most of the time he’s pretty good and intimidating.  Derek Jacobi was also pretty good as Alexander Corvinus, but neither of them really gave me anything much to talk about.

Underworld: Evolution manages to not drive the series down.  If you liked Underworld, you’re probably down with this one too.  I probably appreciated this movie a little more because, though the story that never interested me too much stepped down a bit, the action that I liked amped up slightly.  It also looked much better, having probably benefited from the success of the first movie.  I own this movie on DVD, just as I do the first one, and I think it’s definitely worth a watch.  Problematically, I remember disliking the third movie in this series, so much so that I actually never purchased it on DVD, even with my OCD-like need to complete series in my DVD collection, and that one is up next.  We’ll find out how that one goes tomorrow, but for now Underworld: Evolution gets “You depend on blood” out of “You are unwelcome in my presence.”