The Key Ingredient of Drinking is Alcohol 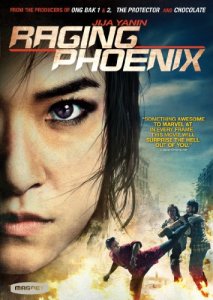 The inspiration for watching today’s movie came from seeing the same actress last year in a film called Chocolate.  It was about a young autistic girl who develops martial arts abilities by watching it on TV.  The young star of the movie impressed me enough to put another one of her movies in my Netflix queue, and promptly forget that it was there.  But Netflix didn’t forget.  It worked it’s way up my list and was shipped to my house, much to my chagrin, since it was available for streaming and I wasted a disc delivery on something I could’ve already watched.  I’ve forgotten nearly everything about Chocolate by this point, but I still decided to watch and review Raging Phoenix, written by Sompope Vejchapipat, directed by Rashane Limtrakul, and starring Yanin “Jeeja” Vismistananda, Kazu Tang, Nui Saendaeng, Sompong Lertwimonkaisom, Boonprasayrit Salangam, and Roongtawan Jindasing.  Not a single one of these people was named with the fact that I would have to type their names out in mind.  Very selfish.

Deu (Jeeja Yanin) is a young girl without a lot of direction in her life.  In her loneliness, she gets super drunk and almost abducted by the Jaguar Gang, a group that abducts young women to steal their tears as if they were Gypsies.  She’s rescued by Sanim (Kazu Tang) and (this is really their names) Pig Shit (Nui Saendaeng) and Dog Shit (Sompong Lertwimonkaisom).  Fuck these names.  Seriously.  Anyways, Deu gets them to train her in a strange, drunken boxing-esque style, and she uses it to help them free other abducted women, with the ultimate goal being to free Sanim’s wife, Pai, who was abducted three years prior.  Eventually, they let Deu know that they were after her (and other such girls) because they have a certain smell that means their tears can be used to make a special perfume.  She also learns that the drunken fighting style is not fueled by alcohol, but emotional pain.  So you know the movies gonna get depressing.

This was a decent enough martial arts movie, but didn’t really strike me in any particular way.  The story was decent, but not really what I go into a martial arts movie for.  Generally speaking, I don’t even mind if a martial arts movie forgets to have a story.  This movie has a whole big story about love and it really gets to be kind of miserable by the end.  I suppose it’s not that uncommon for a martial arts movie to be a bit of a downer, but I’ve always preferred martial arts movies to be a little more fun.  That’s why I’ve always been such a big fan of Jackie Chan.  His movies are usually pretty fun to go along with their good action.  Speaking of which, I was curious (when the idea of alcohol and drunken boxing came up in this movie) to see if the movie was going to turn out to be a lot like the Legend of Drunken Master, one of my favorite Jackie Chan movies, but they actually plain out forgot about the alcohol part not that long after it was introduced, leaving the true source of power to be emotional pain.  I took that as a cue that the movie would be a downer, and I was right.  That was part of the problem I had with some of the Tony Jaa movies.  Shit just keeps getting worse and worse and, at the end, nothing’s that much better.  The protagonist has just beaten the crap out of everyone that they can.  And that’s what happened here as well.  Even having three of your main characters have names that were Something Shit did not keep it from being a downer.  Neither did people saying things like, “The key ingredient of booze is alcohol.”  Also, the title of the movie never really has anything to do with the movie itself.  The fighting is more what draws me to a martial arts movie, though, and this movie’s fighting was fine, but not really a style that I’m particularly interested in.  From what I could figure out, it was the combination of some different forms of martial arts (mainly Muay Thai) with B-Boy dancing styles.  It ends up looking a lot like Capoeira.  It’s pretty visually interesting, I suppose, but I felt like it was a little too much dance and not enough face punching.  One of the first fight scenes is against some guys with these springy shoe things with blades on them, and those were pretty ridiculous, but at least it was interesting to watch.  They also had a big fight over a series of three rope bridges that was pretty interesting and innovative.  The movie itself was pretty visually interesting as well, at least until the end.  Most of the scenes were very colorful, and the bulk of the scenes took place on a beach with a bunch of colorful alcohol bottles laying around.  Near the end, most of the color was removed, adding to the already somber story.

Jeeja actually surprised me in this movie.  Though I’m not fond of how much of a downer the movie is, Jeeja pulled off the emotional parts as well as she did the physical parts.  In Chocolate, she really didn’t have to emote that much, but she was crying for about 90% of this movie.  She’s also a very pretty girl who’s totally able to whoop some ass in movies, and that’s a pretty new thing for most of the martial arts movies I’ve seen.  She’s like Tony Jaa, but I’d totally have sex with her.  Kazu Tang was also pretty good in the movie, at both the acting bits and the action bits.  Nui Saendaeng as Pig Shit was introduced in a drunken form, and he really worked on my nerves.  Thankfully, they forgot about the alcohol subplot and he was less annoying afterwards.  Roongtawan Jindasing was the main bad lady and she did a good enough job, but was pretty clearly doubled out for some of the fight scenes.

Raging Phoenix was a decent enough martial arts movie, but was a little too much moroseness and not enough fighting.  The story was fine and the movie was visually interesting, but it didn’t make any real impact on me.  I think Jeeja has a lot of potential, though, and I look forward to seeing what she does in the future.  If this movie is still streaming on Netflix, and you’re a fan of martial arts movies, this is a decent enough watch, but I’d still recommend Legend of Drunken Master a lot more.  Raging Phoenix gets “It’s a Tony Jaa I can have sex with” out of “Pig Shit.”