It’s Against God’s Will, You Know 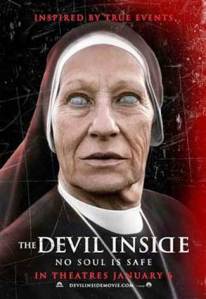 Today’s movie piqued my interest when it was in theaters, but never nearly enough to make me actually go and buy a ticket.  Even having my friend Tiffany officially request it of me couldn’t drive me to the theaters for it.  But I had no intention of leaving a request unanswered.  Even when I ultimately forgot that she requested it, I remained determined to answer the challenge … y’know, once it came out on DVD and I started to remember that it had been requested and then I confirmed it via Facebook.  Well it was released on DVD at the same time that it arrived at a local RedBox, so I reserved it and here we go.  Here is my review for The Devil Inside, written by William Brent Bell and Matthew Peterman, directed by William Brent Bell and Joaquin Perea, and starring Fernanda Andrade, Suzan Crowley, Ionut Grama, Simon Quarterman, Evan Helmuth, and Bonnie Morgan.

In 1989, Maria Rossi (Suzan Crowley) kills three people that were trying to perform an exorcism on her.  She was called not guilty on the grounds of insanity and institutionalized, later getting moved to a psychiatric hospital in Rome.  20 years later, her daughter Isabella (Fernanda Andrade) starts filming a documentary on the subject of exorcisms with Mike (Ionut Grama) and travels to Rome to find out more about exorcisms and meet with her mother.  When they get to Rome, they attend a class on exorcisms and meet a group of priests with varying opinions on exorcisms.  Two of these priests, Ben (Simon Quarterman) and David (Evan Helmuth), ask Isabella and Mike if they would like to attend an exorcism so that they can get a better understanding of the process.  But the exorcisms these two priests do are unsanctioned by the church.  They do them because they believe the church is too concerned with covering up and protecting their reputation to intervene when they’re needed.  Isabella and Mike also visit Maria in the hospital, finding that she’s carved upside-down crosses into her skin and inside her lip, and she mostly acts like she doesn’t recognize Isabella.  But she also makes a mention of the baby Isabella killed, somehow knowing about the abortion she had.  When Ben views the video of the visit with Maria, he decides they should investigate and see if an exorcism should be performed.  And, as with most times you deal with demons, everything goes great.

This movie is the Rage of films.  Some of you that keep close tabs on my reviews will remember my review of the video game Rage saying that I enjoyed a lot about the game until the end.  And the reason I didn’t like the ending was because it didn’t have one.  Such is the situation with The Devil Inside.  I found myself pretty interested with the movie for the majority of it.  It’s not unlike the ghost movies that I’ve confessed my love for already, but it’s been a while since I watched a really good exorcism movie.  Not that this has really changed because of this movie as it’s okay at best.  There’s some cool creepiness to be had from the exorcism scenes.  And I never really found myself getting bored with the movie because they really didn’t waste a lot of time in the movie.  And I tend to fall for the found footage movies more often than not.  Not that I ever believe what I’m watching actually happened, but since I tend to shut my mind off for most movies and try to just sit back and enjoy, the found footage type of movie tends to get me to feel more immersed in the scene.  And whether the person I’m sitting in the room with is actually being inhabited by demons, or she’s just crazy and thinks she is while simultaneously being able to fire blood out of her cooch (which actually happens in the movie … icky), I’m on edge.  That was about all it got out of me, though.  It never managed to scare, and thankfully didn’t substitute that with cheap startling moments, but was only ever to pull off creepy.    But, even with this, it’s interesting premise, creepiness, and it’s good pacing would have made this movie something I actually might purchase … if they ended it.  It’s hard to spoil an ending that didn’t happen, but just in case ::SPOILER ALERT::  Maria was inhabited by four or more demons, and these demons started spreading the love when an exorcism was attempted on Maria.  First to David, who responded with suicide, and then to Isabella, who responded with a seizure.  In the hospital, she goes ape-shit and stabs a nurse so Ben and Mike take her from the hospital and try to rush her to Ben’s exorcism teacher.  On the way, Mike seems possessed and crashes the car, assumedly killing all three of them.  Then the movie’s over.  This isn’t just an unsatisfying conclusion; it’s the three remaining main characters dying on the way to the conclusion.  Did they run out of money, or did they run out of interest?  Either way, it pissed me off.  I was so confused that I sat through the credits hoping for the real ending, but all I got was a link to a website that annoyingly tried to continue the idea that this found footage was real by linking you to a website where you could be a part of the ongoing investigation.  I determined to go there because of my own ongoing investigation to find the ending of this movie, but the website would not load, further depriving me of any clue in the disappearance of this movie’s ending.  ::END SPOILERS::

For a P.S. on that point, the website finally loaded and it’s just pissing me off.  I’ve talked about how I hate the fact that movie makers in the found footage department apparently think so little of anyone that’s going to see their movie that they try to act like all of this shit really happened, but The Devil Inside takes it a bit further.  Their website seems to be trying to continue to act like all of this shit was real as well, even citing a real 1989 murder where a girl named Maria Rossi killed a random elderly woman.  There’s also a forum on there where it looks like people are actually discussing whether or not this movie was real.  First of all, if you kept your eyes on screen for 10 seconds after the website popped up, you’d see that these people were displayed with two names.  That’s because they were played by someone.  If an actor is portraying something, it’s not real life.  Secondly, the fact that the main character of this movie shares a name with someone that killed people once doesn’t even mean that this movie was based on them.  In this movie, Maria killed three people by herself because she was possessed.  In the story I vaguely skimmed, two kids strangled and stabbed a woman who was walking her dog because they’re scum.  I assumed the scum part.  I had to stop reading the forums on the website because (whether the posts were from real people or not), it made my faith in humanity hit rock bottom.  And since my faith in humanity couldn’t go lower, I had no reason to continue reading.

Some of the performances in this movie impressed me and others didn’t, but none of them were ones that I thought were bad.  I was impressed by Suzan Crowley and Bonnie Morgan for their ability to really seem possessed.  Suzan just seemed completely nuts, but in a really freaky way that had me on edge even when she was acting like a confused older lady.  When the actual crazy comes out, she does that well too.  Bonnie Morgan was good at it too, but even more because she’s apparently double jointed or something and able to do all of that crazy icky stuff like dislocating her shoulder.  Fernanda Andrade didn’t overly impress in her turn at it, but she did a pretty good job acting like a regular girl.  Although, since she probably is, it’s not that impressive.  But she was purdy, so I give her that.  I got annoyed near the beginning of the movie because I started realizing that, unless she popped up again later in the movie (which she doesn’t) then the creepy-looking nun lady with the cataract eyes from the cover of the DVD was just an insignificant character that they happened to walk by as they were chit-chatting.  What’s that all about?  That’s like having my debut performance as Audience Member # 138 on the cover of the Knocked Up DVD.  I mean, I was great in that scene that you may or may not be able to see me in, but I think it made more sense for Seth Rogen to be there.

I would say I liked about 99% of The Devil Inside.  There’s a good amount of creepiness and chills and they never really draw out scenes longer than they should, and the found footage style really helps this type of movie on its goal.  I even like the performances, particularly of the possessed people.  The thing that lowered this movie from “okay” to “disappointing” is the ending, because there wasn’t one.  And, because of that, I don’t know that I’d really recommend this movie.  You can pick it up at a RedBox for a dollar if the rest of the movie as I described it intrigues you, but you’ll at least go in already knowing what’s waiting for you in the end.  The Devil Inside gets “My ass is bleeding” out of “You’ll burn.”