Maybe I’ll Sleep With You if You’re the Last Man on Earth. But We’re Not on Earth. 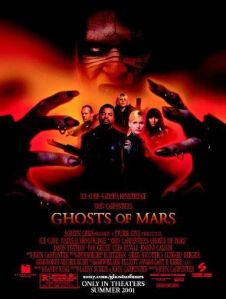 My inspiration for watching this movie was pure randomness. I saw it in my instant queue and thus I watched it. I really should get to some of those review requests I have building up, but I decided at random to watch this movie. This will be a short introduction indeed. I have no idea how this movie got added to my queue, I don’t know why I picked it to watch today, and I know nothing about it beyond a few people that star in it. And most of those people aren’t even reasons to watch a movie! It doesn’t really matter. I watched it and now I reviews it. This movie is Ghosts of Mars, written by John Carpenter and Larry Sulkis, directed by John Carpenter, and starring Natasha Henstridge, Ice Cube, Pam Grier, Jason Statham, Clea DuVall, Liam Waite, Joanna Cassidy, Duane Davis, and Richard Cetrone.

In the 22nd century, on a mostly terraformed Mars, a team including Melanie Ballard (Natasha Henstridge), Helena Braddock (Pam Grier), Nathan Jericho (Jason Statham), Bashira Kincaid (Clea DuVall), and Michael Descanso (Liam Waite) are sent to a small mining town to transport a murderer named “Desolation” Williams (Ice Cube) to prison. When they arrive, the town is virtually deserted. They find a few survivors and one of them named Whitlock (Joanna Cassidy) explains that they found a hidden doorway that was opened, releasing “ghosts” into the air that inhabited the miners, turning them crazed and violent. They form an uneasy alliance with Williams to hold out against the threat long enough for their train to return.

Was I mistaken, or is John Carpenter generally regarded as a good filmmaker? ‘Cause the movie I just watched was typical, poorly-conceived shoot-‘em-up bullshit. It’s mostly just a collection of better movies put together in a way that was as interesting as it was easy to follow … which is to say “not”. The bad guys looked like they were from the Mad Max movies, though they mostly acted like zombies, and the main bad guy looked like the Kurgan from Highlander, but he only spoke in gibberish. The sets in the movie looked like they were stolen straight out of either Total Recall or Judge Dredd. And the story was pulled straight out of the toilet behind a Mexican restaurant. A good bit of the dialogue was just trying very hard to sound official. I could just imagine them sitting in the office and yelling out the door, “I need a book of military terms. STAT! Okay, I definitely want to use ‘clicks’ for distance, ‘marks’ for targets, and I probably only want to refer to time in hundreds. And, by God, cock your damned guns instead of punctuating!” Of course they would do this to make their police team seem more qualified, forgetting the fact that everything else they wrote made them look like the worst team of police officers that’s ever existed. They were decent enough in a fight, but every 10 minutes or so they’d get in a position where they were being held at gunpoint and everyone had to slowly lower their weapons to the floor. Also, after everything they go through, they don’t accomplish any one of their missions, but they do lose the greater majority of their team. To try to make their team a little stronger, they add in some of the prisoners and murderers that they’ve encountered without bringing the collective IQ of the group into triple digits. Hell, one of them cuts his thumb off trying to open a can of food with a machete. They were only able to succeed because the enemies were even stupider. The closest thing they could come up with for motivation for these guys is destruction. Living creatures aren’t supposed to want to destroy the planet. They live there too! All they ever did was try to destroy things and, when they didn’t have things to destroy, they all stood around and either yelled gibberish at each other or stuck pieces of metal into their faces. If they weren’t these guys, they were a red/purple smoke that would take control of the camera and smack into people’s face, though it seems that was to indicate that they were being inhaled. All I could see was that it looked like I was wearing old school 3D glasses when I was supposed to be seeing from their point of view. What I could also see is that this movie sends the worst kind of message ever. When Melanie inhales the crazy smoke, they give her some of the drugs out of her stash, which allows her to overcome her possession. That is not a joke! Drugs saved her life! I don’t know why the movie didn’t just end with the good guys wrapping the town in cellophane and hotboxing all of the bad guys until they came out of it.

The performances didn’t impress but, in their defense, most of them didn’t seem like they were trying either. They all probably just agreed to be in this movie based on John Carpenter’s involvement, thinking they would be in one of his good ones. But they had already signed the contracts by the time they read the script, so they just had to ride it out. Natasha Henstridge did a good enough job. She played badass pretty well on occasion, I suppose. In the beginning, she does get needlessly defensive at her debriefing, but I think that was probably the piss-poor writing. She walks in to the room with a committee, they tell her to have a seat, and she starts demanding a lawyer. We haven’t even asked you anything yet! Jason Statham did a decent enough job, but he was never really likeable. The only concern he had was to try to fuck Natasha Henstridge through the entire movie, paying little mind to the weirdos trying to kill them all. Speaking of which, the crazy people never did a good job. They came off more goofy than scary.

I had no reason to watch Ghosts of Mars, and I probably should have taken that as a sign. The story was stupid and pointless, and mainly just tried to steal from so many better movies. The action is decent, but not decent enough to be a reason to watch this when you have to sit through the story to get to it. The performances seemed phoned in, but I couldn’t really blame them for it. Altogether, I see no reason why you would watch this movie. You COULD stream it, but I wouldn’t bother unless you need to write a review for the day as well. Ghosts of Mars gets “The ass end of the universe” out of “Come on, you mindless mother fuckers!”

Let’s get these reviews more attention, people. Post reviews on your webpages, tell your friends, do some of them crazy Pinterest nonsense. Whatever you can do to help my reviews get more attention would be greatly appreciated. You can also add me on FaceBook (Robert T. Bicket) and Twitter (iSizzle). Don’t forget to leave me some comments. Your opinions and constructive criticisms are always appreciated.