Has the Shit-Man Stopped Farting?

Fabio once again proves himself to be an asshole.  I’m sure no one has heard of today’s movie.  I certainly hadn’t.  I’m sure that the percentage of you that have actually seen this movie is even lower.  I’m not even sure that Fabio has watched this movie.  If I had to put my money on something, it would be that Fabio knew only the name of the movie and found the pun so appalling that he felt I needed to watch it.  As ever, I am up to the challenge.  I had to first wait for the movie to arrive via Netflix, but it finally has.  And so I present my review of Monsturd, written and directed by Rick Popko and Dan West, and starring Paul Weiner, Beth West, Dan Burr, Brad Dosland, and Hannah Stangel.

The randomly evil Dr. Stern (Dan Burr) does an experiment that leads to the death of a coworker of his.  In response, he does the only rational thing: put her body in a vat of chemicals that dissolves her well enough that he can dump her in the sewer.  Meanwhile, escaped serial killer Jack Schmidt (Brad Dosland) runs from the police into the sewers where he falls into some of the same chemicals and dies.  Later, people start to go missing, and always in the vicinity of a toilet.  This is when the horrible truth of Dr. Stern’s experiments is revealed.  Dr. Stern has made a chemical that blah blah blah giant poop monster!  The whole town is left in the hands of Sheriff Duncan (Paul Weiner), Agent Hannigan (Beth West), and two cleverly named Deputies named Deputy Dan (Dan West) and Deputy Rick (Rick Popko).

I feel like I could just sit back and let you guys write my review for this one.  But no one cares what you have to say.  I’M the one with Microsoft Word and a free WordPress account!  This movie is exactly what you think it is.  This movie is a piece of shit.  I would ask you to excuse the pun, but I gave up on excusing puns in the first two seconds of this movie because all of the writing in this movie is every poop and pooping pun any average 6 year old could cobble together.  The movie is basically told in a similar way to the Princess Bride, as it’s a storytelling situation between an old guy and a kid, the switch coming from the fact that the kid is telling the story to her dad before going to bed.  It’s appropriate because the story seems like it was written by a 6 year old kid, but probably a boy instead of the girl that was telling it.  I imagine the writers of this movie might even use this as an excuse for their horrible writing.  “It was a story being told by a child.  That’s why it’s so childish!”  The problem is that it was actually written by two guys in their late 20’s or early 30’s.  The whole movie basically comes off like a poorly-conceived Saturday Night Live sketch without even a semblance of funniness.  The story is completely ridiculous as you read in the story summary.  For a couple of things you didn’t see from that summary, one of the big things that caused me some serious pain was that the people armored themselves to go and fight the poop monster by outfitting themselves with diapers.  Yup.  They also defeat the monster with a combination of Super Soakers filled with Pepto Bismal and some flies, transported to the battleground in a pet carrier with an open metal fence on the front that would contain a cat, but not houseflies.  It’s interesting in that either one of these endings left to their own devices is completely moronic, but they put them both together to create some new form of stupidity not yet classified.  Of course, there were other stupid things to keep the ending from feeling lonely.

Take, for instance, the fact that the prison guard was so fooled by the dummy that Jack Schmidt left in his prison cell that he wasn’t convinced that it wasn’t him until he slapped it on the side a few times.  See the picture for added stupidity.  Of course, with the horrible joke they attempted to make just with the name Jack Schmidt, I shouldn’t be that surprised by such a Schmidtty joke.  Later, when Sheriff Duncan is chatting with a waitress and she talks about donuts, he jumps right into, “Well, how about you sit on my face and make me look like a glazed donut?”  For reals?  Not only is it super inappropriate to jump straight into that kind of line during a normal chat, but you’re an on duty officer of the law!  If you wanted to get the gist out of how bad the puns are in all of the dialogue, you can pretty much get away with just listening to the song that ran over the end credits, as it’s a compilation of all their worst puns into one awful song.  Fuck this movie.

The look of the movie, unsurprisingly, is crap.  They start the movie out in a science lab and, in case you don’t believe that they’re scientists, we’ll throw some beakers around and put the periodic table up on the wall.  You with us now?  Later on, two cops are having a conversation via walkie talkies, but they could apparently only afford one, and they also lacked the forethought to use the same one in the different locations, because one was talking into a walkie talkie and the other was talking into an old style Nokia cell phone.  They try to go for a visual gag throughout the movie by having everyone eat stuff that resembled the poop that they based their movie on, including chocolate pudding and ending the whole movie outside of a chili cook-off.  Their visual gag succeeded in making me visually gag.  They also rip off South Park at one point in the movie, having a character pointlessly watching a program that somehow managed to look like a worse version of the already awful looking early South Park episodes, and of course it was an idea stolen from the Mr. Hanky the Christmas Poo episodes.  The shit monster was done about as well as everything else in the movie. 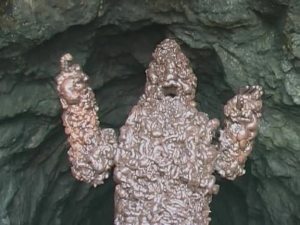 It was pretty clearly just spray foam painted brown, and the fact that they went for the typical poop look made the creature look like a Klan member that had a very unfortunate accident.  The scenes of the creature killing people was not much more than someone pulling the arms off the poop creature and poking someone in the neck while someone off camera threw chocolate sauce into their face.

I can’t really say I have anything special to say about the performances in this movie.  They were all equally awful, with no one standing out as more awful.  I think they just serve as proof that hiring family and Community Theater rejects to be in your movie will work out just as everyone suspects it will.

I hate the hell right out of Monsturd.  If one of my friend’s two-year-old daughters wrote this exact story and showed it to me, I would slap them in the face and say, “I expect more from you.”  It’s nothing more than a collection of sigh-worthy poop jokes.  But, if I sighed every time they made one, I’d asphyxiate in the first couple minutes of the movie.  The look of the movie keeps up the quality, and the performances manage to be just as bad as everything else.  There is not one redeeming quality to this movie.  Now let us never speak of it again.  Monsturd gets “A total piece of shit” out of “And it’s crappy too.”