I Can See Your Dirty Pillows. 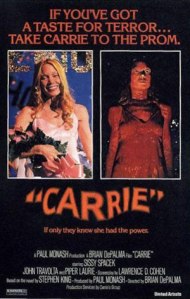 The impetus for today’s movie was almost entirely based on Netflix.  I knew I was looking for another classic horror movie and I came across this movie while looking through the horror movies in the instant section.  I knew I needed to review this movie in my Horrorthon.  Then I reached a problem: I was not looking at the right movie.  I was apparently looking at the 2002 made for TV version of the movie I was thinking of.  And the movie I was thinking of was not one that could be streamed.  But I already had my mind set to review it.  It took some doing, but I finally found the movie Carrie, based on a novel by Stephen King, written for the screen by Lawrence D. Cohen, directed by Brian De Palma, and starring Sissy Spacek, Nancy Allen, Piper Laurie, Amy Irving, William Katt, John Travolta, Betty Buckley, and PJ Soles.

Carrie White (Sissy Spacek) is a shy weirdo that gets abused by her schoolmates for not understanding what’s happening when she gets her first period in the shower.  To top that off, her mother (Piper Laurie) abuses her as well because she thinks Jesus gave her a period as punishments for her sins or some such nonsense.  But Carrie starts to realize that she’s not just an ordinary creepy girl.  She starts to realize that she can do things with her mind, a phenomenon she finds is called “telekinesis.”  But, more important than that (if you’re a high school girl), is that Tommy Ross (William Katt) asked her to the prom!  Sure, he asked her at the behest of his girlfriend, Sue Snell (Amy Irving), because they felt sorry for Carrie.  But Carrie still has a problem: Chris Hargensen (Nancy Allen).  Chris is the head of the bully girls that pick on Carrie, and she resents Carrie because picking on her got her punished and banned from the prom.  And that’s just good logic right there.  Chris devises a plan with her boyfriend Billy (John Travolta) to make Carrie pay for the punishment that she brought on herself.

I was pretty surprised to find that I didn’t care for this movie at all.  It’s so well-regarded, but I was not into it at all.  It was mainly the story that turned me off too.  This wasn’t a horror movie; it was whiny high school drama with a ham-fisted telekinesis subplot.  I was equal parts bored and irritated.  The high school type stuff I just found really boring because we’ve all seen that stuff before, and done much better.  And it didn’t seem realistic too, but it’s hard for me to tell.  I haven’t been a girl in high school in many years, but I don’t think girls would just mock a girl for getting her period.  You bitches all do it too!  And that’s why you’re gross.  I’m also sure there are girls in high school so devoid of logic that they would blame Carrie for their troubles like Chris did, even though she clearly brought it all on herself.  And then there’s the trouble at home that comes with her way over the top crazy mom who takes a natural (albeit icky) thing like menstruation and takes it as a sign from God that Carrie is a sinner.  Those people I just like to believe don’t exist.  And how the fuck do her religious beliefs work anyway?  Getting your period is evil, but trying to murder your child later in the movie is alright in God’s book?  And the way they introduced Carrie’s powers was ham-fisted and irritating.  Each time something happened because of them was displayed with a short, sharp noise that felt like I was being stabbed in the ear with the fact that Stephen King just found out what telekinesis was and decided to base a book on that.  And the way she used them was pretty shitty too.  Sure, the prom scene is super memorable and kind of nifty, but I was mainly struck by the fact that she didn’t seem to punish any of the people that deserved it.  People that had tried to help her died and the people that started everything escaped through the front door.  Granted, some of them got what was coming to them later, but it was just shitty.  I also thought a lot of the dialogue was pretty bad.  Someone actually says, “Get ‘er done,” in this movie!  It made me lose all the respect I had for Larry the Cable guy.  The worst dialogue in my opinion is any conversation between Nancy Allen and John Travolta.  That was abysmal.

I’ve heard a lot of good things about this Brian De Palma fella, but I would still have to confess that I was unimpressed with the look of this movie.  I know I’m not a director or anything, but I got to thinking that some of the shots were just rudimentary and distracting.  I first started thinking this when they were in class and Carrie says Tommy’s poem was “beautiful.”  It was a close up on his face with her in the background.  Then there was also a scene where they seemed to try to do a split focus on it – the likes of which were talked about in great length in Citizen Kane for some reason – but this movie did it poorly.  You could see a giant, blurry seam down the center of the frame!  If I had to say one good thing about the direction of this movie it would have to be that the opening credits were chock full of titties.

I suppose I would be comfortable giving credit to some of the performances in this movie.  Sissy Spacek did a formidable job being mostly quiet and reserved, but occasionally manic and at least one occasion scary.  Also, she got her boobs out.  …I think I’d bang it out on Sissy Spacek in this movie.  I’m not gonna lie to you people.  I didn’t really find that many other people in this movie altogether noteworthy.  Some of them did fine jobs, some were underwhelming.  I did get annoyed at the principal in the movie though.  I understand not remembering someone’s name.  I do it all the time.  But if someone corrects me once, I would either remember or not attempt their name again.  This dude seems to go out of his way to get her name wrong, even when it was an awkward placement to even say her name.  I know what they were trying to do, but it was another location where it seemed a little ham-fisted, as if the movie was just trying too hard.

I may be alone in this, but I didn’t like Carrie.  The story took turns being either boring or annoying and it seemed to me to be poorly directed, even though it was Brian De Palma.  I’m too lazy to look it up, but I am under the impression that he’s a good director.  I didn’t see that here.  I’m disappointed in both Stephen King and Brian De Palma for this movie, but I am good with what Sissy Spacek brought to the table.  It may have been amazing when it came out somehow, but I’m not down with it today.  It’s probably a movie you should watch because it’s a classic, but it’s my opinion that you can skip it.  Carrie gets “They’re all gonna laugh at you!” out of “I hate Carrie White.”