But What if it Wasn’t Just a Movie? 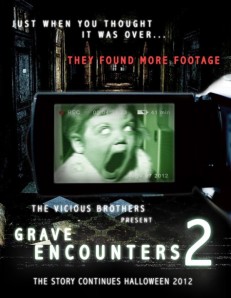 Today, I watched a sequel to a movie I didn’t know that I wanted a sequel to. I had seen the original, I had reviewed it, and then I forgot it. It came back into my life when my friend Tiffany excitedly announced on Facebook that the sequel was now available on Netflix streaming. I think I even knew the movie existed before it was available to stream and forgot that. So that’s a great endorsement for the movies, right? Well let’s see how it turns out as I review Grave Encounters 2, written by the Vicious Brothers, directed by John Poliquin, and starring Richard Harmon, Leanne Lapp, Dylan Playfair, Sean Rogerson, Stephanie Bennett, Howie Lai, Sean Tyson, Ben Wilkinson, Arthur Corber, and Brenda McDonald.

The movie starts off with people that are basically less popular and talented versions of me reviewing the original Grave Encounters movie. They may have asked me, but I forgot the entire movie so I doubt I remember them asking me to participate in a sequel. Also, having me say, “Huh? Gay Encouters? No, I haven’t really had any,” wasn’t what they were going for. What they WERE going for was people shitting on the movie, like Alex Wright (Richard Harmon). Alex is an aspiring filmmaker that makes YouTube reviews on the side. Unlike me, Alex gets comments on his YouTube videos, and one of them is from Deathawaits6, who sends a video of Lance Preston (Sean Rogerson) in the mental hospital, as well as geographical coordinates for the hospital. Alex starts to become obsessed about whether or not the movie was real. After some investigation, he sets out with his producer and friend Trevor (Dylan Playfair), actress and girl with a crush on Alex, Jennifer (Leanne Lapp), Jennifer’s friend Tessa (Stephanie Bennett), and cameraman Jared Lee (Howie Lai) to see if they can get to the bottom of the grave encounters.

I’m having a bit of a difficult time with this movie. I found some parts of it very effective, but I also felt like it was treading roughly the same waters as it had in the first movie. First off, you done fucked up by not including me in the first part of this movie with the other YouTube reviewers! Just because I didn’t remember the movie doesn’t mean I can’t talk about it! And just because I wasn’t making YouTube videos at the time … y’know what? Never mind. After that, the movie spends an awful lot of time not doing anything scary and forcing us to spend a lot of time with annoying frat boy people that I didn’t join a frat specifically to avoid. Why? They actually include a joke in the movie that exemplifies it. When they first arrive at the hospital, they test out their thermal cameras by having the annoying frat guy fart. That’s some classy stuff there. And they spend way too much time building up to going back to BEEP manor (they don’t say the name), even though it barely ever makes sense. First of all, if I assumed that the first movie – or this one – was real, the last thing I’d want to do is go and find out for myself. I watched that movie. Life was not happy times and sparkles for those people. So if someone named “Deathawaits6” posted a comment leading me to believe that it really happened, I would think to myself about how interesting that was, and that is all. I wouldn’t mind investigating a ghost thing, but if all my information led me to believe that “Death Awaits” if I go there, I’d be all set. No one in this movie ever started to think about the possibility that “Death Awaits” was a bad omen. And thusly, they deserved to die. Darwinism. Of course, once they are stuck in BOOP hospital, Alex has put all their lives in danger and they get mad at him for saying they should go back for the cameras. I actually agree with him here though. First off, he says that’s like $50,000 of equipment that he’d then be responsible for. I’d go back for that. And he did the right thing by having them split up into two groups to collect them. They probably would’ve been fine if they stuck to those groups. But, of course, one person in those groups goes off on his own to get a camera and gets killed. Because, even though he’s a film student, he’s never seen a horror movie before. They also make a joke about how black guys always die first, and they avoided that possibility by not even including a black dude in their group. Of course, they stick pretty close to the cliché by making the only non-white (the Asian dude) get killed first. Later in the movie, they encounter Lance, still alive after all these years, living in the hospital, and the stupid frat guy argues about following him. Really? You can either wander around the constantly changing infrastructure of BLARP hospital until you get killed by something you can’t see, or you can follow the guy that has been living and surviving there for 9 years. I won’t spoil it, but the ending to the movie was pretty fucked up, but in a shocking way instead of a shitty way.

The visual effects and scares of the movie are mostly effective, especially when you factor in that this was probably made for much less money that a lot of the bigger horror movies. I can’t say I was impressed by the first big one though. They did the Ouija board gag! How many times have we seen that? I can think of at least 5 movies right now, and drugs have completely riddled my brain. It must be one of the easiest gags to pull off too. At first, you just need the actors to move the planchette while acting surprised, and then you can probably just pull it off with magnets when they’ve let go of it. It’s not entirely ineffective though, but this movie only really changed it by having it scratched into a table instead of having a factory produced board. Most of the rest of the stuff in the movie worked pretty well. The only other gag I took issue with was the ghosts filming Lance. Why the fuck would a ghost do that?

Although I could probably be prodded to say that the actors in this movie performed well, I didn’t like spending time with any of them. Richard Harmon didn’t do anything that bothered me beyond not banging Leanne Lapp, and Leanne Lapp didn’t do anything to annoy me beyond wanting to bang Richard Harmon. Truthfully, the only people I hated were the frat people, and more specifically the über-frat-boy cliché, Dylan Playfair. Technically, he did a great job portraying that character. I could tell because I hated him and didn’t want to be around him. I was very pleased when he got himself killed, which was dumb in itself. He actually went off into the bathroom by himself to record his will and got killed for it. Why the fuck you would do that? You realize the most likely scenario is that you will be requiring a will because you went off to record one, right?

Grave Encounters 2 feels like a slightly amped up version of the first movie, but I guess that’s what sequels do. It never made sense that they would go to the hospital beyond needing to get us to the place where the scares happen. I would’ve liked for them to get us there quicker, but I liked the time inside the hospital for the most part. Fairly effective and a decent enough watch if you like found footage ghost movies, but it’s not going to be the movie that changes your mind if you don’t. You can check it out on Netflix streaming. I’ll endorse that. Grave Encounters 2 gets “It’s just like the movie” out of “It’s not worth it…”