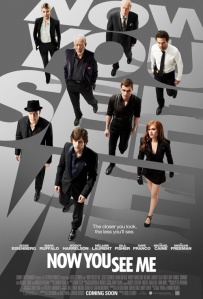 As the day of my birth approaches, I decided that I should not be at work as I turned 30.  Well, not at one of my jobs at least.  I would spend my vacation from one job working on the one I actually enjoy: stuff-reviewing.  The first step would be to make my way to the theaters, with my friend Greg in tow.  There were a few movies that I wanted to see in theaters, but Greg had either already seen them or had no desire.  We agreed only on today’s movie.  This movie had piqued my interest when I saw trailers for it, but I had apprehensions about it.  It seemed like an interesting enough premise, but I worried at the movie’s ability to realize that interest.  We find out how well it did as I review Now You See Me, written by Ed Solomon, Boaz Yakin, and Edward Ricourt, directed by Louis Leterrier, and starring Mark Ruffalo, Jesse Eisenberg, Woody Harrelson, Isla Fisher, Dave Franco, Mélanie Laurent, Morgan Freeman, Michael Caine, Common, Michael J. Kelly, and Elias Koteas.

A few stray tarot cards bring together four magicians – Daniel Atlas (Jesse Eisenberg), Merritt McKinney (Woody Harrelson), Henley Reeves (Isla Fisher), and Jack Wilder (Dave Franco) – with a plan to accomplish three amazing feats for a mysterious benefactor.  They become “The Four Horsemen,” sponsored by insurance magnate Arthur Tressler (Michael Caine).  For their first trick, they rob a bank in Paris and give all the money to the audience.  This attracts the attention of FBI Agent Dylan Rhodes (Mark Ruffalo) and Interpol Agent Alma Vargas (Mélanie Laurent), who need to figure out how they did it and what they intend on doing next.  For that, they enlist the help of an ex-magician who makes a living debunking other magicians, Thaddeus Bradley (Morgan Freeman).

I enjoyed this movie.  It was not without its share of problems, but I still found the experience enjoyable.  I found the premise of the movie to be the most compelling part.  The idea of magicians using their abilities for “evil” instead of their usual motivation of “pussy” was very interesting to me, and I thought it was clever how they did it.  I especially liked when Jack Wilder fought the two FBI Agents using magic as a fighting style.  I wasn’t able to figure out their Las Vegas stunt until they revealed it to us.  Their New Orleans stunt was much more predictable and much less mystifying, especially with what they did with the word “Freeze” and how easy it would be to make someone’s money move from one account to another with a simple computer, but there were still some clever ideas in there.  I feel like the problem I had with the movie was that it practically dared the audience to figure it out and to be wary of misdirection, but overall wasn’t clever enough to make it happen.  When one of the characters tells Rhodes that someone might be a spy for the magicians, you can pretty much rest assured that it won’t be either the character that told him that or the character he was talking about.  That would be too easy.  But it doesn’t leave many options, so it wasn’t that hard to figure out.  And though you might not have known how they accomplished something, you can have an idea that something was accomplished, like the part in the story with a car crash.  I didn’t know how it was faked, but it’s a movie about magic.  Of course it was faked.  I would also say that the movie started off by getting me, because I totally picked the card that Jesse Eisenberg put on the side of the building, but there’s also a chance that this could’ve been manufactured with camera tricks.  I also felt like Woody Harrelson’s mentalism stuff was mainly included for exposition, because he delivered most of the character’s backstories using that stuff.

The cast of the movie was great, with no real complaints.  They got great people so I would expect nothing less.  Jesse Eisenberg plays nervous and self-conscious better than he plays a cocky douche, but he did very well.  Isla Fisher is hot, and I heard she almost drowned at one point in this movie, so props for the commitment as well.  Woody Harrelson was pretty entertaining all the way through, and he got to be the funny one in the group most of the time.  I’ve loved me some Mark Ruffalo ever since he was the Hulk, and I found myself worried for the magicians that they might get him too angry.  They might not enjoy that.  I was also very excited to see Mélanie Laurent since I haven’t seen her since I fell in love with her in Inglourious Basterds.  Long distance relationships are always so hard…  I also got to thinking that, with both Michael Caine and Morgan Freeman in this movie, how could they not have been able to get Christian Bale (and maybe even Hugh Jackman) to come in for a pivotal scene at the end of the movie where they just yell, “THE PRESTIGE!” and dance around in circles?  It would’ve made the movie for me.  But sometimes, I just want to watch the flash paper burn…

I thought the premise of Now You See Me was great, but there just wasn’t enough magic in the storytelling.  Their clever ideas also activated the parts of the brain that cause us to try to figure out how magic is accomplished, but the story wasn’t quite polished enough to hide their secrets from me.  But their ideas were clever enough to keep me interested, and it was presented well enough and included many great performances.  I’d say this movie is definitely worth a watch.  I don’t know that I’d say it was important enough that it need be seen immediately in theaters, but it also wouldn’t hurt.  Renting it would do fine as well.  Now You See Me gets “The more you think you see, the easier it’ll be to fool you” out of “You have what we like to call in the business, ‘nothing up your sleeve.’”