Sooner or Later, When They’re Ready, They Will Take Your Family. 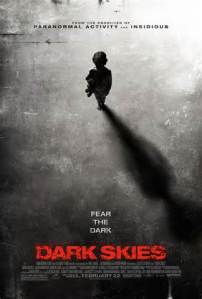 At the behest of my friend Tiffany, I decided to watch a movie I believed I had never heard of. When I started looking into it a little more, it turned out I actually did know what it was from the trailers, but decided I had zero interest in seeing it. I had an idea of what they were going for from what I had seen, and most of it seemed like what it was trying to call scary looked more goofy than anything else. But this was a legitimate request, and that requires a legitimate review. Plus, it seemed to be fate, since this movie started with the same Arthur C. Clarke quote about not being alone in the universe as X-Com, the game I started playing at exactly the same time. The quotes even popped up on screen about the same time! So I rented it and I present you with my review of Dark Skies, written and directed by Scott Stewart, and starring Keri Russell, Josh Hamilton, Dakota Goyo, Kadan Rockett, and J.K. Simmons.

The Barrett family – father Daniel (Josh Hamilton), mother Lacy (Keri Russell), eldest son Jesse (Dakota Goyo) and youngest son Sammy (Kadan Rockett) – are troubled. Daniel is unemployed and can’t get a job, Lacy is too honest to sell a house, Jesse is hanging out with an older kid who gets him to smoke weed and touch a girl’s titties, and Sammy pees himself and screams in public. The very last thing they’d need is a bunch of strange occurrences and alien invaders. But we do have a movie to make here, so let’s get some birds crashing into the house, let’s get Lacy to smack her face repeatedly against a window, let’s get Daniel bleeding from the nose and making strange faces, and the kids can have a few spazzy moments and bruises on their bodies. Sound good? Alright, break!

I was not a fan of this movie. Nor was I a fan of anything this director has brought to the world. He made Legion and Priest, two exceptionally mediocre action movies. This time he brought us an exceptionally mediocre thriller movie. I have been criticized before for reviewing something that I wasn’t contributing very much attention to, but I found that I couldn’t help it here. This movie just really wasn’t interesting. They spend an awful lot of time dealing with family issues, and that was just boring. And mostly didn’t even bother making sense. They’re having financial problems but they still invest in a brand new security camera system for the entire house? I understand wanting to know what is causing the troubles in your house, but you’ve spent the entire movie talking about how broke you are. You talk about getting rid of cable! I guess you have something to watch either way, so if you’re making the choice, go with the CCTV. None of the alien stuff made much sense either. At first, the aliens are just dicks. They come in and build towers out of food stuffs and pull all of the pictures out of the frames? The just want to pester humans? I agree with J. K. Simmons’ logic when he says that the aliens travelled hundreds of light years to get to Earth, so moving a couple of miles down the street or staying in a hotel room wouldn’t keep you safe from them. What I don’t agree with is saying that they have the ability to fight back. Especially when their version of fighting back is the Signs principle of fighting back. Hundreds of light years travelled, but boarded up windows, a dog, and a shotgun will fix them up real good. If only they had some random cups of water lying all over the place because of some other annoying brat, this movie would’ve had a different ending. I also didn’t appreciate how they handled the ending. The actual ending notwithstanding, what happened afterwards was irritating. They had Lacy looking through pictures and remembering thing the family had said and things Simmons had said that would indicate that Jesse was going to be taken instead of Sammy, as they previously thought. But why bother acting like this is significant information? He’s already been taken. If the whole family had made it through and THEN you started looking through the stuff, only to find out he just got abducted, then I would accept your tactics.

The performances never really made any positive impact on me. Josh Hamilton came off as mostly douche, as most husbands do in these kinds of movies. The woman usually figures out what’s going on long before the man does, and he remains incredulous despite her pleas. He acts like she was insane after he was just standing outside with a stupid look on his face and blood pouring from his nose. The blood was still crusting on his face as he told her how ludicrous she was. He even used the line, “Who are you and where is my wife?” Come on! The 80’s called, and they want their joke back. And the one I just used to mock the original joke. Keri Russell did well enough through the movie, but the part where she banged her head against the window was more goofy than anything else. I get the feeling that this was not their intention. Neither of the kids made any impact on me whatsoever.

Dark Skies is an entirely skippable movie. It’s not at all interesting, and most of what they attempt by way of scares turns out goofy. Most of the movie makes little to no sense and it ends with a whimper, though the greater majority of the movie was one long whimper. The performances only managed to fit into the stereotypes of this kind of movie. Basically what I’m saying is there is no reason I can think of to watch this movie. It’s not the worst thing ever, and wouldn’t be painful for you to watch. It just has nothing of value. Dark Skies gets “Either we are alone in the universe or we are not. Both are equally terrifying” out of “I don’t know whether to be pissed or impressed.”