Take Yo Panties Off! 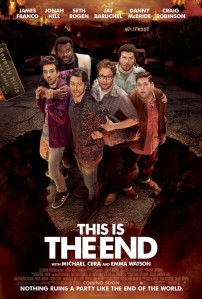 Based on the poster alone, I had no interest in seeing today’s movie.  I liked the people I saw on the poster, but I’ve seen them all in movies that were both great and awful, so the poster alone couldn’t really capture my attention.  But that’s why they make trailers.  When I started seeing the trailers for the movie, my desire to see it took to a sharp incline.  The trailer wasn’t laugh out loud funny, but that could be a good thing in this case.  The trailer should just show the potential for the movie; not spoil the best jokes.  And that’s what this trailer did.  Plus, the premise seemed fantastic.  But Friendboss Josh already had an appointment to see this movie with his girlfriend, the Whitney-Bird.  So we went down to the theaters to catch Man of Steel instead.  But that shit was sold out.  Good thing for me, Friendboss Josh values his friendshipbossship with me more than he values vagina, so we went to see This Is the End, written and directed by Seth Rogen and Evan Goldberg, and starring Jay Baruchel, Seth Rogen, James Franco, Craig Robinson, Jonah Hill, Danny McBride, Emma Watson, Michael Cera, Jason Segel, David Krumholtz, Paul Rudd, Mindy Kaling, Martin Starr, Channing Tatum, Kevin Hart, Rihanna, Christopher Mintz-Plasse, and Aziz Ansari.

Jay Baruchel goes to Los Angeles to visit his friend Seth Rogen.  After a celebratory day of smoking weed and playing video games, Rogen suggests that the two of them go to a party at James Franco’s house, but Baruchel doesn’t want to go because he doesn’t know or like anyone at the party and worries about being left alone there.  Sure enough, upon arriving to the party Rogen goes off on his own, leaving Baruchel in uncomfortable conversations with people like Michael Cera, Emma Watson, and Rihanna.  Rogen and Baruchel walk down to a store to pick up some snacks, but their shopping is interrupted when blue beams of light grab some of the shoppers and drag them up to the heavens.  Then the fuckin’ apocalypse happens, instantly killing many of the celebrities at Franco’s party, leaving Rogen, Baruchel, Franco, Craig Robinson, and Jonah Hill alone in the house to fend for themselves.  They ration out what little supplies they have and go to sleep for the night.  When they wake up, they find that Danny McBride had crashed the party and fallen asleep in a bathroom upstairs, and had come down and prepared all of their food for breakfast.  How will this group of sheltered celebrities be able to survive the reckoning?

I feel like I won’t have very much to say about this movie.  What I will say is this: this is probably the best comedy I’ve seen in a very long time.  I just can’t think of very many funny things that I could put in a review about something that was keeping me laughing super consistently for the greater majority of the movie.  There was a moment to make me laugh out loud at least once every five minutes.  That’s one hell of a ratio!  I barely ever laugh in movies, so that should tell you just what I think about this movie.  I would say that it could be easily argued that the story was a little underwhelming.  It was mainly just an excuse to get these really funny people into situations they could improvise jokes about.  But a comedy doesn’t really need to blow you away with story.  One of my favorite comedies is Airplane! and that’s really all that movie is.  I’m not going to come back here and write a review about the fact that its story wasn’t spectacular when all it was trying to be was a comedy and it kept me laughing.

The cameos in this movie are crazy.  They have ridiculous celebrities in this movie.  I liked most of those people and was tickled to see them in this, and I even really liked the celebrities that I don’t normally like.  Rihanna had a funny moment with Michael Cera, Channing Tatum had an amazing joke, and even though I don’t like them, the Backstreet Boys reveal was pretty awesome, albeit unnecessary.  Jay Baruchel was a little whiny in the movie, but he was also plenty funny.  Seth Rogen was hilarious.  I did think that it didn’t make sense for people to act like he wouldn’t get into heaven if he used Jesus’ name in vain.  He’s Jewish!  They don’t care about Jesus!  James Franco had plenty of funny moments as well.  I especially liked the story he told about Lindsay Lohan thinking he was Jake Gyllenhaal and him telling her to call him the Prince of Persia.  Danny McBride is always a strange character for me.  He never really plays anyone likeable, but he’s really good at playing that character.  And he made a great joke about Franco being gay.  I would say if there were anything bad to say about the cast of this movie it would be that Emma Watson had too small of a part in the movie.  She was great in the movie, and the parts she was in were pretty hilarious, but I want to look at her at all times, and I also want to have a little resolution to what happened to her.  After she leaves, we never see her again.  I assume there’s no way she could go to heaven because she portrayed a witch in 8 movies, so that’s means she’s for sure Hell bound, but the movie never said for sure.

I really can’t do much in a review of This Is the End.  I cannot add funny to the funniest movie I’ve seen in a long time.  This movie was created by a bunch of professionally funny people, and I do this for free.  The story was an interesting idea, but a little simplistic, but who cares because it was mostly there to set up some really funny people being funny.  This movie kept me laughing all the way through, giving me only brief pauses to catch my breath so I wouldn’t die while watching it.  You definitely need to get out to see this movie as soon as you can.  I can’t imagine you’ll regret it.  This Is the End gets “The power of Christ compels you!” out of “I’d be pretty bummed if I don’t at least get a bite of the Milky Way.”