A Web Would Indicate an Arachnoid Presence. 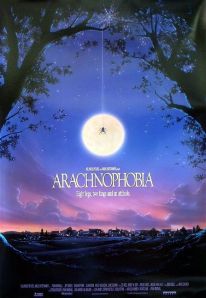 Once upon a time, I rescued my super sissy friend Protestant from a spider.  Even though I would say that I have a fear of spiders myself (I wish there were a word for that), I drove to her house to protect her.  She is woman and I am man.  This is my station in life.  I beat that 8-legged mother fucker to death with my dick.  MAN STYLE!!  Then I ate raw steak off of a bone.  I’m such a fuckin’ man.  I spent roughly the next 2 hours mocking Protestant relentlessly (I guess you could say it was more like 2 years because I’m still doing it), and left for the evening.  About a year later, the experience of being so awed by my manliness had worn off and Protestant’s brain was freed up to think of requests.  And thus she requested Arachnophobia, written by Don Jakoby and Wesley Strick, directed by Frank Marshall, and starring Jeff Daniels, Harley Jane Kozak, Garette Ratliff Henson, Marlene Katz, Julian Sands, Mark L. Taylor, Roy Brocksmith, Henry Jones, James Handy, Brian McNamara, Stuart Pankin, Mary Carver, and John Goodman.

Doctor Ross Jennings (Jeff Daniels) moves with his family to the small town of Canaima, California under the assumption that he will be taking on all of the patients of aging Doctor Sam Metcalf (Henry Jones).  Much to his surprise, Metcalf decides he no longer wants to retire once Jennings has moved in, screwing over Jennings and his family.  Margaret Hollins (Mary Carver) finds out about this and suggests that Jennings throw a “Get to Know Doctor Ross” party as Metcalf once did, getting Jennings lots of potential patients with public relations since he’s already a superior doctor.  Jennings tells Hollins that the medicine Metcalf prescribed to her was unnecessary, and Hollins later says that she’s never felt better.  But then she’s found dead in her home, and the people of Canaima start to infer that it was a misdiagnosis by Jennings.  …Oh yeah, and there are spiders too.

This wasn’t a great movie, but it was dumb in the best of ways.  It doesn’t act goofy, but it winds up being pretty goofy, and most of the scenes involving John Goodman make me believe that it was their intention to be silly, so I allow and enjoy it.  It feels a lot like the old creature feature movies I’ve seen Mystery Science Theater make fun of, and that’s probably what they were going for.  I actually started getting this movie mixed up for Giant Spider Invasion that I watched on MST.  It’s pretty goofy and pretty easy as well.  The title pretty much says all you need to know about the inspiration for the movie.  A lot of people are scared of spiders.  Make a movie with a lot of spiders and you already have plenty of people freaked out.  It never really managed to scare me as much as it kind of creeped me out, as simply seeing most spiders will do.  Though it doesn’t scare, it will probably make you shake out your underwear a little more than usual before putting them on.  Of course, its goofiness makes it fodder for jokes, so here are some I thought of.  The firecracker analogy the entomologist uses in the beginning of the movie is not the most apt of analogies.  Shooting smoke into a tree is not similar to throwing a firecracker into a pond.  Maybe if you threw a stick of dynamite into that tree, I’d be with you.  The entire premise of the movie seems ridiculous too.  The greater majority of spiders are more afraid of us than we are of them, and will generally only attack when threatened.  Not these dudes.  These mother fuckers are out for death!  This spider is literally watching the photographer step on his homie and decides that this mother fucker is going down.  Nobody fucks with Los Arañas, ese!  It sees this guy kill his friend, remembers him, hides in a backpack, singles him out specifically in the camp, kills him, and then drains the guy dry.  He’s the Arnold Schwarzenegger of spiders!  Then I took issue with the fact that Dr. Metcalf was talking about looking into medical malpractice against Jennings after he just made such a stink over not allowing an autopsy to happen.  I’m pretty sure you’d have to get some proof for medical malpractice, and there’s a certain procedure that’s best suited for proving such things and you just shat in its mouth.

The movie ends with a lot of conveniences that amused me as well.  It was convenient (all through the movie, technically) that the spiders always waited till the most pivotal moment to do something.  In the end it was convenient that they waited until it was climax time to burst out of every seam of the house when none had been seen in the house prior.  Then it was also convenient that only the big spider Jennings would have a prolonged battle with was home when he fell into the basement.  I know they kept saying that the spiders were territorial and typically only one would be in the nest area, but they all lived there mere minutes before, and now only one.  I also thought the movie had a real sign of the times at the ending.  They go back to the city and are enjoying wine in the living room when they leave because of some silly earthquake gag, leaving the camera to watch the wine bottle drain on the floor.  In today’s movie world, there would definitely have been some credit sequence reveal where a spider crawled out of the wine bottle, hinting at a sequel.  This movie at least was fine with just making one really goofy movie.

The look of the movie worked fairly well, but they started off using a lot of gimmicks to cover up the fact that their main spider was less than convincing.  They did a lot of just showing his legs at the edge of the frame because showing all of it would display wires or a dude’s hand in a spider glove or whatever.  Later, I found myself very impressed with the tricks they somehow got these spiders to accomplish.  There were a lot of shots of spiders lowering themselves from their butt webs onto things and spiders dragging sacks through windows.  It must be pretty difficult to train these things.  And these spiders really cover their bases when it comes to webs.  This one spider covers every fuckin’ inch of that farmhouse with web, catching everything from mice to bats, and I’m pretty sure there was a fuckin’ cat hanging in that web at one point.  These spiders that stick to corners are underachievers and deserve to starve to death.

They actually got some decent actors to play it straight in this movie.  You’d think they might either not try that hard or be a little goofy, but most of them just went straight with it.  John Goodman was a little goofy, but he was also very funny in the movie so I was okay with it.  He was probably the most consistently enjoyable part.  Julian Sands’ entomologist character was unconvincing to me, but mainly because he was the foremost expert in spiders and still let one catch him in the neck while he was playing with its web.  I was also excited to see that Grandma Gilmore (Frances Bay) and Mimi (Kathy Kinney) were in this movie.  …That is all…

Arachnophobia wasn’t a good movie, but it was a fun movie, and an effective movie.  The story was silly and not that complicated, reminding me a lot of old creature feature movies, but it was enjoyable to watch and it’s effective in that anything that lands on your skin will freak you out for a while.  The performances were all good, especially John Goodman.  This movie still holds up as a pretty fun watch, and even better if you’re looking to make jokes about something.  Arachnophobia gets “You think I was hoping you were ravaged by disease?” out of “Tear out bad wood.  Put in good wood.”