Maybe I Am Just Chasing Shadows… 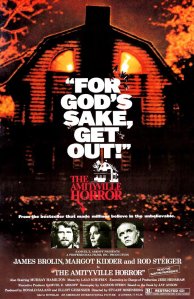 I have no idea why I was so drawn to today’s movie.  It’s another classic horror film, but that doesn’t usually work out in my favor.  I guess the thing that drew me to this movie the most was the movie The Conjuring that I saw in theaters not too long ago, a movie about two people whose investigations inspired this movie.  I think I’ve even seen the more recent remake of today’s movie, but we’ll get to that when I review it later.  For today, I had a big hankering to watch The Amityville Horror, based on the novel by Jay Anson, written by Sandor Stern, directed by Stuart Rosenberg, and starring James Brolin, Margot Kidder, Rod Steiger, Don Stroud, Murray Hamilton, Natasha Ryan, K.C. Martel, Meeno Peluce, Michael Sacks, Helen Shaver, and James Tolkan.

The father of a family goes through his house, systematically killing his entire family.  A year later, George (James Brolin) and Kathy Lutz (Margot Kidder) see no good reason not to move on into that house.  While they’re outside playing with their children, Kathy’s priest Father Delaney (Rod Steiger) shows up on Kathy’s request to bless the house.  Since they don’t answer the door, he shows himself in, and promptly shows himself out after the house tells him to leave after burning his hand and attacking him with flies.  Turns out it might be a bad idea to move into murder houses.

This movie was somewhat effective, I suppose.  It never really scared me or creeped me out, but it wasn’t bad.  You kind of have an idea of where it’s going.  I would’ve guessed that the dad would wind up killing the family if I didn’t already know a little about the people the movie was based on.  I guess you could say that the fact that it wanted to stick a little close to the source material may have hindered it.  The real incident didn’t have a very satisfying conclusion, and neither did this movie.  They get haunted for a little while and then just leave the house.  Boooooooring!  They didn’t defeat the demon, they didn’t rid the house of the troubles, and they didn’t even kill each other because of the evil influence.  They just get sick of being pestered by the spirits and they leave.  The spirits didn’t even do that much to the family.  In fact, it seemed the spirits were more powerful the further you got from the house.  They did some major damage to the priest that was miles away from the house.  They blinded him and seemed to make him lose his mind.  The people in the house heard voices, got angry with each other, felt a little under the weather, and talked to imaginary friends.  The worst that happened to them was that the dad fell through the stairs into some black goo.  One thing that occurred to me is that movies like these are going to completely ruin the concept of the imaginary friend.  It used to just be a cute thing that kids did and adults ignored.  Now it seems that all movies wind up making the imaginary friend some malevolent spirit.  And the illness was a strange thing, but mainly just because the family was too stupid to put two and two together.  Kathy writes it off as a stomach virus that’s going around.  Yeah, it’s going around … to only people that enter your house … at the exact moment they enter your house …  And why is the church so reluctant to investigate these things?  Wouldn’t it benefit you?  Even if what you find is a demon, finding proof of a demon would imply the existence of God.  You could do a good deed and shut those smug atheists up at the same time!

The look achieves what it wants, but doesn’t try too hard.  The closest they came to a ghost was two red dots out of a window.  The sets were nice though.  The house looked nice, and I thought it was cool (if not a little overt) that the two windows kind of looked like eyes.  I also thought it was interesting that the basement looked like the basement from the Conjuring, especially since that movie was about the same people that investigated the Amityville incident.  I know they weren’t the same house, but I feel like it might have been an homage in the Conjuring.  Or a delusion in my mind.  They did a couple of interesting visual effects, like the red negative image of the house, that were cool but also served no real purpose.

The performances in the movie did well enough.  That crazy ass Margot Kidder is in this movie.  Turns out she was attractive before she was nuts.  And if you can dig on Margot Kidder, this is a good movie for you.  Most of her outfits seem like they were ordered right out of a fetish catalog.  Pig tails, ballet dancer (complete with open shirt that may have given you a peak at them boobs), plaid school girl skirt.  I was waiting for the finale of the movie with the French Maid outfit.  James Brolin did fine in the movie, but I never really understood the motivation for looking like Grizzly Adams through most of the movie.  Mountain man ain’t scared of no ghosts!  I had some problems with the priests in this movie.  Is it wrong to call a priest a dick?  Because the ones in this movie were.  First was the one that just showed himself into the Lutz’ house.  He got punished with stomach pain and some blisters on his hands.  Honestly, if I were a priest I’d have blisters on my hands too, if you know what I’m sayin’.  Then were the ones that wouldn’t investigate even though it would prove their religion true and save some people’s lives.  I guess the Bible doesn’t say anything about helping people.  The worst one was the one that sat down next to Father Delany after he went blind and started talking about how beautiful the scenery was.  Dude just lost his sight, dick!  The most important role in this movie to me was Mr. Strickland himself, James Tolkan.  He did next to nothing in the movie and didn’t even have a name, but Back to the Future is awesome!

The Amityville Horror was … acceptable.  Problematically, it was not good enough for me to recommend it for you for enjoyment, and it was not bad enough for me to recommend it to you for mocking.  Simple story with an unsatisfying ending, nothing special to the visuals, but a decent enough cast.  You can go ahead and skip this movie.  The Amityville Horror gets “Jody doesn’t like George” out of “GET OUT!”