This is Only the Beginning…The Fifth Beginning! 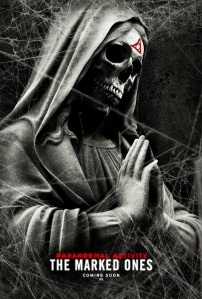 I’ve made no secret about my love for ghost movies, but my friend Don’vang did.  I figured I would be seeing today’s movie by myself before he propositioned me to go see it with me.  “Dandy!” I says to myself before agreeing to go with him.  This movie is the fifth part in a series, no matter what they tell you.  They kind of acted like this movie was a “cousin movie” to the franchise, but I’ve seen it now; it’s basically a sequel.  I’ll just call it part five.  This series hasn’t always been the greatest, but I’ve pretty much liked them all.  And I’ve reviewed them all already, so I might as well review part five or as they call it Paranormal Activity: The Marked Ones, written and directed by Christopher B. Landon, and starring Andrew Jacobs, Jorge Diaz, Gabrielle Walsh, Carlos Pratts, Richard Cabral, Katie Featherstone, Molly Ephraim, and Micah Sloat.

In Oxnard, California, recent high school graduate Jesse (Andrew Jacobs) and his friend Hector (Jorge Diaz) witness their classmate Oscar (Carlos Pratts) running from the scene of a murder in Jesse’s apartment complex.  They go to check out the lady’s apartment and find signs of witchcraft in the apartment and a picture of Jesse.  The next morning, Jesse finds a strange bite mark on his arm and odd things start happening to him, like floating when he falls backwards, being able to fling thugs with superhuman strength, and having conversations with an old Simon toy.  And then shit starts getting weird.

The Marked Ones was not drastically different from the other Paranormal Activity movies, but I don’t really want it to be.  It always takes them a bit to get into the action, showing a lot of boring stuff like the guy’s graduation and his purchase of his camera that he will then be filming the rest of his life with, but this movie doesn’t waste that much time getting into it.  Much like the previous movie, this one was solid throughout and had a very strong ending, involving a full-scale shootout and a fantastic tie-in to the first movie.  And it had some interesting ideas.  I thought the Ouija board Simon was kind of a funny take on the Ouija board.  There was also some decent and sometimes funny writing, like the Sherlock Holmes joke.  …I guess to get that one you have to hear it out loud.  It’s set in a Hispanic area!  You know how they call each other “Holmes” sometimes?  Ah, forget it!

As with all of these movies, there are also some problems.  Not enough to take away from my enjoyment of the film, but certainly enough for me to make fun of in review form.  First of all, this movie wants us to believe that someone is giving out free GoPro’s with the purchase of a regular camcorder?!  POPPYCOCK!  And all other forms of cock as well!  One of the actual things I thought about was the fact that these movies do make us waste a lot of time with these characters, such as when we had to watch them making a movie about making his pet Chihuahua dance.  I would like to request that the further movies only show us things that progress the story.  A lot of these found footage movies like to present themselves as if they were FBI archived footage of the events they found on the camcorder, but I think the FBI would find that particular piece of footage removable.  That’s the other big thing about these movies: why are they recording everything?  It’s the thing you could say about a lot of found footage movies.  When they were talking about all the kids they found pictures of, they said the things these kids all have in common is they’re the first born, they’re male, and they’re missing, but made no mention to the fact that all of them have a penchant for recording every little detail in their lives.  It feels weird to say that the supernatural stuff didn’t all make sense, but it’s true.  I found it amusing when they were going through a bunch of stuff that seemed all witchy that they found in the witch lady’s apartment and one of them was a dream catcher.  Is that supposed to be voodoo or something?  ‘Cause I have a demonic artifact hanging over my bed if that’s the case.  I also thought Jesse had a gross misunderstanding of his guardian demon.  It catches him when he falls down but doesn’t push those skanks away from him when he’s trying to get lucky?  A bruised coccyx fixes itself, but herpes is forever.  The biggest problem is that this movie had absolutely no concern for the audience’s ability to speak Spanish.  You can mostly understand the movie without it, but I feel like I missed some stuff because I don’t speak this language.  Are a few subtitles too much to ask, or are your inside jokes only for Mexican people?

The performances were fine but as with most horror movies, their performances didn’t require much more out of them than to be really scared a lot.  And Andrew Jacobs had to get all evil-like.  He did that fairly well.  I had some troubles with Jorge Diaz’ character in parts.  First off, who’s dumb enough to enter a room in a spooky witch coven house when the light on your flashlight was tripping out?  Stay where you are and wait for that shit to come back.  And that’s just the first dumb horror movie character cliché he falls into.  The next was shortly after that when he tells Gabrielle Walsh’s character to wait while he looked around the spooky house.  Really?!  And you’re surprised when she’s gone when you come back?  And you’re filming it all!  Well I guess that’s more of a problem with Richard Cabral’s character Arturo.  He’s supposed to be this big gang banger character and yet you let Hector film you and your gang banger friend breaking into a house and gunning down old ladies just because you believe they’re witches?  I feel like a real gang banger wouldn’t like the video evidence being around of all his worst crimes.  Of course, none of the gang bangers in this movie were that wise.  Like the ones that get flung off by Jesse’s guardian demon.  You guys were punching him in the arm and shoulder!  You trying to give him a Charlie horse or kick his ass?

There were definitely some problems with Paranormal Activity: The Marked Ones, but nothing that took too drastically away from my appreciation of the movie.  The story was okay but not drastically different from the other movies.  The same basic set up, some decent action once it gets going, some tension and suspense without too much for scares, but a very solid ending that I appreciated for how it linked the movies.  The performances were good even if the characters did fall into some familiar horror movie clichés.  All around a good movie.  Probably not quite good enough to win over any new fans, but existing fans of the Paranormal Activity movies will appreciate a little more of the same and the expansion of the existing plot.  Paranormal Activity: The Marked Ones gets “You ever get the feeling that someone’s just watching you?” out of “He won’t be Jesse anymore.”

One response to “Paranormal Activity: The Marked Ones (2014)”