If You’ll Excuse Me, I Can Feel the Blood Rushing Back Into My Sword 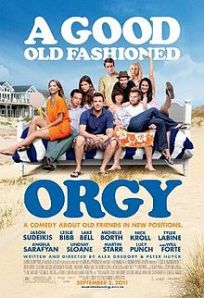 Eric (Jason Sudeikis) loves to throw giant elaborate parties at the house of his father, Jerry (Don Johnson).  Most of these parties he throws with his close friends from high school – Sue (Michelle Borth), Mike (Tyler Labine), Alison (Lake Bell), Adam (Nick Kroll), Laura (Lindsay Sloane), Glenn (Will Forte), Glenn’s wife Kate (Lucy Punch), Doug (Martin Starr), and Doug’s girlfriend Willow (Angela Sarafyan).  At Eric’s White Trash Bash, he meets Kelly (Leslie Bibb) and gets her number.  The next morning, Eric’s father tells him that he’s selling the house because he doesn’t need it anymore.  Realtor’s Dody (Lin Shaye) and Kelly are in charge of the sale.  Eric and Mike decide that they need to throw one last party, but it needs to be special.  After some brainstorming, Eric decides that the group’s last party should be an orgy.  Most of the group takes a while to come around to it, but eventually they are all in.

I went into this movie as a fan of Nick Kroll, Tyler Labine, and Jason Sudeikis from some of their other endeavors.  Though this movie did not change that, I found it underwhelming.  It’s not a bad movie, and there are one or two solid laughs in the movie, but that seems like it’s a bit low for something that is exclusively a comedy.  The other jokes were not painful failures at funniness; it just didn’t have anything good enough to make me laugh.  They got a lot of mileage out of uncomfortable situations such as a lady having a heated argument with her boyfriend on opposite sides of the bathroom door while another guy was on the toilet in the bathroom with her, or like having a conversation with a guy while he was preoccupied with having sex with a woman who should’ve stopped appearing naked on camera roughly 20 years ago.  I’ve also noticed an upsetting trend in comedies recently.  Far too many comedies recently are going for the shock value laugh of putting some wang up on screen.  Walk Hard did it, Forgetting Sarah Marshall did it, and this movie does it as well.  My problem with this isn’t just the fact that, as a straight man, I’ve no real interest in seeing dick.  I look at penises all the time … when I’m watching porn.  I don’t like being caught off guard by it.  Also, it just seems too easy.  It makes you shocked and uncomfortable and people tend to laugh as a release for that stuff, but that is not to be mistaken for something that’s actually funny.  Boobs and vagina being on display is rarely used as comedy by itself, so why should it be that just putting a penis on screen is comedy?  The only occasion I can think of that boobs by themselves were the joke was in the movie Airplane!, and that wasn’t the one of the only funny things in the movie.  …Perhaps I’ve talked about penis too much…  The movie does not disappoint with its title.  There is indeed a big orgy at the end of the movie.  It’s much sweeter and nicer than the orgies that I’m accustomed to.  It’s like if a group of friends that were really comfortable with each other decided to get down and dirty.  They would joke around while fucking, so it wasn’t as obscene as someone might expect going into it.  But I ultimately went into the movie looking for laughs, and found them few and far between.  I can find boobs much easier.

I like the people in the cast of this movie, but none of them really succeeded in doing much for me in this movie.  Jason Sudeikis seemed a lot like his character from SNL where he plays one of two assholes, along with Kristen Wiig.  And, though I really like those sketches, I didn’t find much of interest in his character.  He was just kinda douchey.  I’ve ranted over a particular movie that Tyler Labine was in before, playing a sweet and innocent hillbilly in Tucker and Dale vs. Evil.  He played it kind of stupid and sweet again in this one, but without the writing quality of the other movie, it never had much effect.  I was also all in for Nick Kroll, having loved his comedy special and his appearances on the Doug Loves Movies podcast, but this role was hardly a stretch for him.  He played a neurotic Jew.  What else is new?  I don’t really blame the cast for this movie not connecting with me, but I also can’t claim that any of them really connected with me.  All of the main cast females were attractive and did their parts, but none stood out.  There were a pretty good amount of nice-lookin’ boobs; I’ll give the movie that much.