I Only Ask for One Thing in Return; a Good Seat from Which to Watch Asgard Burn! 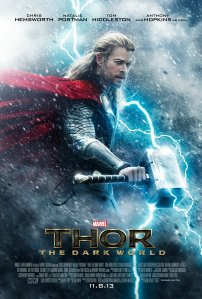 I would like to offer you some backstory to why I saw today’s movie, but it simply doesn’t exist.  It’s a sequel to a movie I’ve seen and vaguely liked.  But more importantly than that, it’s a comic book movie.  That is all that is required for me to find interest in seeing it.  And then the movie came out and I watched it.  What do you want from me?  There’s not always an interesting story leading up to these reviews!  Sometimes I just watch movies!  And this one was Thor: The Dark World, written by Christopher Yost, Christopher Markus, and Stephen McFeely, directed by Alan Taylor, and starring Chris Hemsworth, Natalie Portman, Christopher Eccleston, Anthony Hopkins, Tom Hiddleston, Rene Russo, Stellan Skarsgård, Kat Dennings, Idris Elba, Adewale Akinnuoye-Agbaje, Jaimie Alexander, Ray Stevenson, Zachary Levi, and Tadanobu Asano.

Eons ago, the Asgardians defeated the Dark Elves on the battlefield of Vanaheim –where Disneyland will someday be built – before they got the chance to plunge the universe into darkness with a weapon known as the Aether, but their leader Malekith (Christopher Eccleston) manages to escape with his lieutenant Algrim (Adewale Akinnuoye-Agbaje) and some of their men.  In present day, the realms come close to aligning again, bringing the return of Malekith when he senses that the Aether was discovered by Dr. Jane Foster (Natalie Portman) when it started to use her body as a host.  Her “boyfriend” Thor (Chris Hemsworth) returns to Midgard to take her back to Asgard with him to see if it can be removed.

I didn’t really go into this movie expecting much.  The first Thor movie was okay, but not really anything special.  This one was slightly better.  Not the greatest thing ever and not the worst, but it was an enjoyable enough watch.  The story was your basic “Bad thing’s gonna happen, hero’s gotta stop it” storyline.  And some of the subplots were a little predictable.  If you were the type that kept thinking during the Avengers, “Why did they make Coulson’s part so much bigger?  It’s like they’re trying to get us attached to him for some … Oh …,” then you may think the same thing about a returning character that had one or two lines in the first movie and was suddenly Chatty Cathy.  There’s also a fight near the end of the movie between two characters who – though they are technically enemies – are clearly faking it.  I don’t think anyone watching thought they were actually fighting instead of feigning a fight.  Though the writing can be predictable, there are some well-written funny moments to be had.  The scene where Thor and Loki are walking down and Loki was changing his appearance was pointless, but funny.  I also thought the moment where Loki and Thor are arguing over who’s a better pilot and Thor says, “Out of the two of us, which one can ACTUALLY fly,” was a funny line, but Loki really dropped the ball on that one.  Thor doesn’t fly!  He throws his hammer and gets dragged through the air by it!

Not much to say about the visuals of this movie.  It looks pretty great all the way through.  One thing that stood out to me was the singularity grenades that the enemies used.  Those were pretty awesome, and pretty brutal.

We’ve all probably seen this cast before, either in Avengers or the first Thor movie.  They do that.  But they still do it pretty well.  Chris Hemsworth is all around solid, in both performance and body.  And Natalie Portman is sexy, in both performance and body.  …I don’t think that one makes sense…  Tom Hiddleston is also very good.  I think the stand out performance in this movie for me was Kat Dennings.  She was comic relief in the first movie, but they really gave her a lot of funny to work with in this one, and she made good with it.  She’s one of the few comic relief performances I’ve enjoyed in recent memory.  I was really curious about the Warriors Three, or more specifically the Warriors Two out of Three.  Ray Stevenson came back as Volstagg, but new actors were portraying Fandral and Hogun.  They did fine jobs at it, but what the hell are the other two doing that they can’t be in an epic Marvel movie?  Once Upon a Time?  Worth it!

Thor: The Dark World was a step up from the original Thor.  The story was basic, but entertaining, and even managed a good couple of laughs.  The look was great and the action was solid, and all of the actors did fine jobs, especially Kat Dennings, who was typically hilarious.  This was an enjoyable movie and definitely worth the money to check it out in theaters.  A rental would also work if you would rather wait for it.  Thor: The Dark World gets “Look at you!  Still all muscly and everything!” out of “If we do nothing, they will destroy us.”