This is my worksheet from Video Review # 20, for those that prefer reading for some reason. 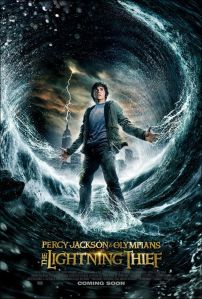 There really was no reason for today’s movie to come around.  No one requested it and I didn’t particularly want to see it.  But RedBox forced me to see it with my eyes when they put it up on the screen while I was perusing their selection, and then my finger forced me to click it because that mother fucker is haunted.  Then my car forced me to see it because it drove me home.  I think the biggest blame should be place on my DVD player, who decided to play it after I put it in.  It had the option to not play it.  I’ve seen it do it before.  But they did make a sequel to this movie that I also have no interest in, but I’m well aware of the fact that I’ll RedBox that one as well when it comes out.  So let’s talk about Percy Jackson & the Olympians: The Lightning Thief, based on a novel by Rick Riordan, written by Craig Titley, directed by Chris Columbus, and starring Logan Lerman, Brandon T. Jackson, Alexandra Daddario, Jake Abel, Sean Bean, Kevin McKidd, Catherine Keener, Steve Coogan, Pierce Brosnan, Joe Pantoliano, Uma Thurman, and Rosario Dawson.

On top of the Empire State Building, Zeus (Sean Bean) and Poseidon (Kevin McKidd) meet to discuss the theft of Zeus’ lightning bolt.  After checking in the cushions of the couch, Zeus decides that Poseidon’s demigod son, Percy Jackson (Logan Lerman), must’ve stolen the lightning bolt, and unless Percy returns the lightning bolt before the summer solstice, a war between the gods will erupt.  Problematically, Percy has no idea that he’s related to Poseidon.  At least not until he is talked by a Fury disguised as his substitute teacher and rescued by his teacher, Mr. Brunner (Pierce Brosnan) – who reveals himself to be a centaur – and his best friend Grover (Brandon T. Jackson) – who reveals himself to be a satyr, and Percy’s protector.  Percy’s mom, Sally (Catherine Keener), tells Percy about how Poseidon knocked her bottom out and left her with Percy, since the gods aren’t allowed to interact with their demigod children, and then promptly gets killed by a Minotaur while dropping Percy off at Demigod Camp.  Percy must team up with Grover and the daughter of Athena, Annabeth (Alexandra Daddario), to find out who actually stole the lightning bolt, and then he must decide if he wants to return the lightning bolt to Zeus, or give it to Hades (Steve Coogan) to save his mother.

When the movie you’re watching is preceded by a commercial for Space Chimps 2, you can kind of get an idea of what you’re in for.  This wasn’t a horrible movie, but it struck me as really dumb.  Maybe it was poorly conceived, maybe it was poorly written, or maybe I just know too much about Greek mythology to let some things stand.  This movie has the line, “Omnipotence has blind you,” right in the opening scene.  I know omnipotence doesn’t technically mean all-seeing, but my first thought was that he was saying, “Seeing everything has made you not see things.”  They also have a scene where Percy’s mom starts telling his backstory when they get into a car, and then cut to the end of the story as they pull into their destination.  Might we have been able to hear some of that information?  It probably would’ve been super boring, but it might have had some pertinent information.  And when they get started on their adventure, it’s all about finding three jewels to go into the underworld.  What a bloody waste of time.  My recommendation for how to get to the underworld?  Suicide pact!  There’s also a whole useless section of this movie where they get trapped in a casino because they’re made to think they love it there with some hallucinogens (a lotus flower) and underage gambling.  Drug use and gambling.  Fun for kids of all ages!  The biggest problem with this movie was the whole reason for the movie: the theft of the lightning.  None of the big gods seemed to even entertain the idea that anybody but Percy could have stolen the lightning!  You could’ve looked in on him and found out that he has no clue that gods are real and yet you think he was the only possible person that could have stolen electrostatic discharge somehow?

One thing I took a lot of issues with in this movie was the fact that Percy knew so many uncommon things about Greek mythology, but was completely unaware of the things everyone knows.  I would wager that most people don’t know what a demigod is like Percy knows (before he knows that he is one, mind you), but who doesn’t know what a centaur is?  And when they’re neck deep in Greek mythology and they walk into a place filled with stone statues of people, how do they not put together that Medusa is comin’ around?  They even know the tactic that Perseus used to defeat the Medusa, but they did not bother to explain how Medusa survived it the first time.  I’m not sure, but I think this movie came out after TWO version of Clash of the Titans, so they could’ve thrown us that.  And then Percy doesn’t know how Hydras work, being totally happy with himself for cutting off all of its heads before someone tells him that this makes two grow back in their places.  Isn’t that fairly common knowledge, especially for someone who knows a thing or two about Greek mythology?  Of course, no one in this movie really seems to have great knowledge on the subject.  His teacher announces that it’s exceedingly rare for someone to be born of one of the big three gods (Zeus, Poseidon, Hades).  Are you kidding me?  Zeus got his dick wet more than anyone in written history (Ironically since you’d think Poseidon was the one with the wet dick).  Zeus was the Wilt Chamberlain of Greek mythology!

I suppose the cast did fine enough in their performances.  Logan Lerman did fine, but Percy got on my nerves.  They give him a pen that turns into a sword early on in the movie, and he didn’t even go for the joke that he should just use it in pen form, since it’s mightier that way and all.  And he didn’t even try to write the Minotaur a citation or something.  Also, he finds out in the middle of the movie that he can absorb water to heal wounds and power himself up and he doesn’t spend the rest of the movie chugging Dasani like he was breathing?  And since he’s the son of the god of the sea, I’ll allow this movie that he can heal himself with water, but how is he able to pour water on other people to heal them?  They’re not the spawns of the sea!  She’s the daughter of Athena, goddess of wisdom.  You should heal her by hitting her in the face with a dictionary or something.  Also, he got over the death of his mom pretty quickly, didn’t he?  Grover just apologizes for sucking at his job and Percy moves on.  Kevin McKidd wasn’t in the movie very long, but I still managed to have problems with Poseidon as a character.  If they wanted us to like this character, they probably should’ve thought of a decent reason why he left his family beyond just he was losing his powers.  Would that have been so big of a sacrifice to spend the rest of your life with your family?  How about something like if you weren’t there to watch the oceans, shit started going crazy.  The Exxon Valdez, the Titanic, etc.  Also, they probably should’ve chosen someone other than Rosario Dawson to play Persephone.  If Hell is an eternity spent with Rosario Dawson, I’m about to go on a murder-suicide spree.  I’d probably get the suicide out of the way first, just because it seems easier, but then some people are getting all killed up.  Uma Thurman was WAY over the top in this movie, but thankfully she wasn’t acting in it very long before she became a prop.  Also, I thought it was just adorable that they made Joe Pantoliano’s character’s last name Ugliano.  Just in case our writing doesn’t express that you’re not supposed to like him, let’s toss Ugly into his name.  Then everyone will hate old Aidsrape Hitler Ugliano.