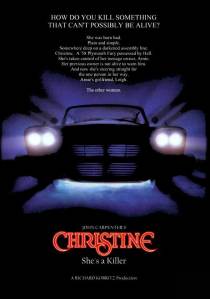 I feel sad as the October Horrorthon is coming to a close.  There are so many more movies I wish I had reviewed!  Well, I did what I could.  And we still have a couple more for you, or at least as many as I can within October.  Today’s movie is both a classic movie and a request from my friend Christie Mallomarchipotle.  It’s also a movie that I’ve never gotten around to seeing even though I’ve heard so much about it.  But, unlike other movies like that, I’ve never heard so much about this movie that it would ruin the ending.  It’s exciting, I know.  All I really know about this movie is that it’s about a car that kills people, and that Christie is an egomaniac for requesting a movie that shares her name.  That movie is Christine, based on a book by Stephen King, written for the screen by Bill Phillips, directed by John Carpenter, and starring Keith Gordon, John Stockwell, Alexandra Paul, William Ostrander, Robert Prosky, Christine Belford, Harry Dean Stanton, and Roberts Blossom.

Arnold “Arnie” Cunningham (Keith Gordon) is the nerdy friend of popular jock Dennis Guilder (John Stockwell).  His parents are douche nozzles and he is also bullied by another high schooler who is way too buff and old looking to be a high school student named Buddy Repperton (William Ostrander).  On their way home one day, Arnie and Dennis come across a beat up 1958 Plymouth Fury belonging to George LeBay (Roberts Blossom).  Arnie falls in love with the car despite Dennis’ disgust in its condition and he buys the car for $250.  Arnie starts to get obsessed with the car (that he finds is called “Christine”), and spends all his time fixing it.  It even starts to affect him as a person, making him quicker to anger with his friends and family and turning him into Peter Parker from Spiderman 3.  Dennis gets concerned for his friend so he goes to talk to George and he finds out that George’s brother, Roland, died in the car from carbon monoxide poisoning after his young daughter had died in the car.  Maybe there’s more to this car than there seems to be…

Finally!  A classic horror movie that lives up to the expectations I barely had for it!  I kind of dug Christine.  It’s not the most spellbinding story ever, but it’s imaginative.  I don’t think I’ve seen very many movies about a car that tries to kill people.  Just that one episode of Futurama.  The biggest qualm I had with the story of the movie is that it never really bothered to explain what made Christine supernatural.  Are we to believe that what made it evil is that it was the only red car in its production line?  Apparently, the book blames it on the death of Roland LeBay, but the movie makes the car evil before it has even left the assembly line, crushing a dude’s hand and killing a guy that sits in it with no explanation about how that happened.  After that, the only other thing that confused me was in the fight with the bully in the beginning of the movie.  During the fight, one of Buddy’s goons participates in the fight by grabbing a heaping handful of Dennis’ dick.  Was that considered a thing back in the day?  ‘Cause if I lost a fight like that, I would be calling that kid a queer.  “I wouldn’t say I lost a fight so much as I turned down your request for a date, bro.  That’s a little aggressive for me.”

I’d say what kept me going with the movie was mostly the direction.  John Carpenter makes some cool movies, and this is another one.  A lot of the things that the car did were pretty cool ways to kill people with a car.  They actually didn’t do much for the easy technique of running someone over, or if they did, they amped it up.  When they did run someone over, it was after Christine just pushed another car into one guy, got completely doused with gasoline, and chased the guy down while completely on fire.  Otherwise, they were all pretty interesting ways to do it.  The one that I took the most issue with was the lame look of killing the shopkeeper by pressing the chair too hard against the steering wheel.  That was more goofy than anything else.  I also liked how well they did the look of making a broken down Christine put herself back together, making the dents pop out like someone was blowing into her tailpipe.  …That sounds dirty.  I meant like a balloon.  The music was a bit of a problem for me, but it usually is in 80’s movies.  The basic score of the movie was just music that sounded like the same music Carpenter used in Escape from New York, so I didn’t really have a problem with that.  The music I did take issue with was the music that Christine would play.  It felt like they could’ve put a little more effort behind picking the songs that Christine would play on the radio to indicate what Christine was trying to say.  There were a couple of occasions where it made sense to me, like when Dennis was trying to break into Christine and she started playing “Keep A-Knockin’ (but You Can’t Come in)”, but I really don’t understand playing “Little Bitty Pretty One” while Christine was trying to run down the fat kid.

None of the performances really impressed in any significant way, but none of them really did poorly either.  Keith Gordon’s character in this movie was definitely what Tobey McGuire based that abortion that he portrayed while walking down the street in Spiderman 3.  He starts off nerdy and nice, but turns into an overly cocky swaggering prick pretty quickly when Christine gets involved.  And he was putting the stupid car over his hot girlfriend that was dying to give him the pussy, but felt neglected because he paid more attention to the car.  That is crazy to me.  Maybe she’d feel less intimidated by it if you would start referring to it just as “your car” and “it” rather than “Christine” and “she”.  And why did he never find it strange that his car got jealous and he had to sweet talk the thing to get it to start?  That would put a little question mark over my head, to be sure.

I was happy to find that Christine was a good movie.  I’ve been underwhelmed by so many classic horror movies lately that it was good to have one live up to my expectations.  The story was imaginative though not mind-blowing, but it was interesting throughout because John Carpenter brings it.  He made the movie visually interesting, and actually found mostly interesting ways to have a car kill people.  The performances bordered on over the top on occasion, but mostly were fine.  I recommend Christine for a watch, especially if you haven’t already seen it.  It holds up, and it’s a movie that’s talked about enough that everyone should know it.  Christine gets “That’s just about the finest smell in the world, ‘cept maybe for pussy” out of “Good!  Now, get the hell out of here.  We’re closed.”