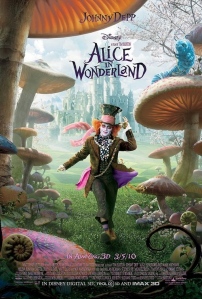 I had no time to do my review of the 6 Star Wars movies today, so I dipped back into my DVD collection and routed out Alice in Wonderland. Not the animated one, the Tim Burton one. I decided to do this movie in case my friend Loni had lost interest in my reviews. You put Johnny Depp on the end of a hook and Loni will bite every time. So lets get into this here movie. This version of Alice in Wonderland stars Mia Wasikowska, Johnny Depp, Helena Bonham Carter, Anne Hathaway, Crispin Glover, Matt Lucas X 2, as well as the voices of Michael Sheen, Alan Rickman, Barbara Windsor, Christopher Lee, and Stephen Fry.

I shouldn’t have to tell you too much about this movie. Who doesn’t know the story of Alice in Wonderland? This doesn’t just remake the classic Disney animation with wacky scenery though. It mashes up two of the classic Lewis Carroll novels: Alice’s Adventures in Wonderland and it’s sequel Through the Looking-Glass. Now 19-year-old Alice (Mia Wasikowska), is an eccentric girl who has been set up for marriage behind her back. When the proposal comes, she jets. She sees a white rabbit in a waistcoat and follows him into a hole, falling down into Underland. Here she meets Nivens McTwisp the White Rabbit (voiced by Michael Sheen), Mallymkun the Dormouse (voiced by Barbara Windsor), Absolem the Caterpillar (voiced by Alan Rickman), and twins Tweedledee and Tweedledum (both Matt Lucas). They tell her she’s the only one that can slay the Jabberwocky and save Underland. She’s not thrilled. Then, the conversation is interrupted by the Red Queen’s army, including the Bandersnatch and the Knave of Hearts, Ilosovic Stayne (Crispin Glover). Iracebeth of Crims, the Red Queen (Helena Bonham Carter with a giant head), is not happy at the return of Alice because she’s come back to slay her beloved Jabber-baby-wocky and she’s looking to separate some heads from some shoulders. Alice escapes and soon comes to meet the Cheshire Cat (voiced by Stephen Fry). He takes her to meet the March Hare and brings about the moment Loni had been checking her watch and waiting for, the introduction of the Mad Hatter, Tarrant Hightopp (Johnny Depp). Together with the Mad Hatter, Alice makes her way towards the Red Queen to find the Vorpal Sword, then off to meet Mirana of Marmoreal, the White Queen (Anne Hathaway), to try to get her reelected as Queen of Underland. And, yes, I did look up all of their full names because they were wacky and I wanted them written in my review.

So the story doesn’t really require very much commentary. Of course it’s great. It’s Alice in Wonderland. This movie can’t really take much credit for that. I absolutely refuse to read without a weapon of some sort pointed at me, so I have no idea how closely they stuck to the source material. I don’t much care either. The movie was interesting all the way through so, much as the Harry Potter series, I don’t care if it’s nothing like the book at all. I’m not sure if it was a choice by Burton or if it was in the books, but parts of this seemed pretty dark for a movie aimed more towards kids. The Bandersnatch get’s it’s eye ripped out, there’s a bird that get’s stabbed in the eye and then gets it’s head crushed by a rock, and there’s a river full of decapitated heads. Hey kids, you wanna watch Alice in Wonderland? No, the one that will give you nightmares. Well then you probably should’ve eaten all of your vegetables at dinner. Now get in here and watch the movie!

As with most Tim Burton movies – and also Guillermo Del Toro movies – the story takes a major backseat to the visual effects. I’m pretty sure both of those guys are probably insane to be able to come up with some of the visuals they use. And it’s okay that they’re crazy because I can just enjoy the visuals of their movies without having to deal with them personally. The movie was in 3D in theaters, but I’m pretty sure no one made me sit through that gimmicky bullshit, and I certainly didn’t watch it like that at home. The landscapes were all rich with imagination; whether it was the lush, colorful forest area or the ruined town, all of it was a pleasure to look at. Some of the visual effects they went with were interesting but occasionally poorly done. I’m talking mainly about the morphing of the people. Tweedledee and Tweedledum were CG fat boys with Matt Lucas’ face plastered on there. The Red Queen had HBC’s head made gargantuan on a tiny body and Cripin Glover was made slightly more tall and lanky than he really is. These effects usually worked but I felt like, on occasion, it looked weird to the point where I noticed it and that’s not a good thing. But it was few and far between. Alice’s size was in a fairly constant state of flux in the movie because of a potion and a cake. This worked well through the movie, but that must’ve been one flexible dress. Also, the Jabberwocky is freaking metal. I wanna make an album and put that guy on the cover.

The performances in the movie were mostly wacky but all pretty good. Anne Hathaway was the stand out for me. Not just because she’s smokin’ hot and I want to make babies in her, but her portrayal of the White Queen was pretty freaking funny as well. She’s got a darkness to her that she’s always suppressing and compensating by going over the top with the prim and proper. Just the way she walked made me laugh. I don’t really know what to make of Johnny Depp’s Mad Hatter though. It was good and interesting, but totally wacky. There were parts where you could really connect with him on an emotional level over the tragedy that befell his town and drove him to madness, but then he’d break into a Scottish brogue out of nowhere. And that Futterwhacken thing? Yeah, I could’ve done without that. I also could’ve done without the scene where Johnny said it in a way that made me think he was talking about regular whackin’ … of the penis … vigorously … HBC’s Red Queen was pretty funny as well. She was like a child given power and murderous intent. The funniest characters were Matt Lucas’ Tweedle twins. I liked their crazy way of making words.

All in all, this is still a good movie. There were parts that lost me, either in wacky performances or slightly askew VFX, but the rest of the visuals kept me pretty riveted throughout. The biggest thing holding this movie back is that it refused to tell me how a raven is like a writing desk. I NEED TO KNOW, DAMNIT!! …sorry. I give this movie “You’re almost Alice” out of “Um.”