There are Things Happening that I Can’t Explain. 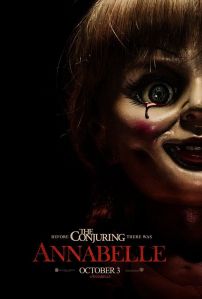 Today’s October Horrorthon movie snuck up on me. I had no awareness of its existence until I started seeing people talking about seeing it all over Facebook and started wondering what it was. Then I looked into it and realized it was a prequel to a movie I had reviewed more than a year ago and had found acceptable. It seemed only right that I take the time to review this movie as well. Especially since my friend Reechurd suggested we see it, and I had nothing better to do. So let’s talk about Annabelle, based on the stories of Ed and Lorraine Warren, written by Gary Dauberman, directed by John R. Leonetti, produced by James Wan, and starring Annabelle Wallis, Ward Horton, Tony Amendola, Alfre Woodard, Kerry O’Malley, Brian Howe, Eric Laden, and Tree O’Toole.

Two people go to Ed and Lorraine Warren because they thing their doll is haunted. We then jump back to the 60’s, where John Form (Ward Horton) gives a doll that Satan’s niece outgrew to his pregnant wife Mia (Annabelle Wallis). Then Charlie Manson calls for Helter Skelter and Mia hears her neighbors being murdered. Not satisfied, the murders then head to the Form house where the woman and the man stab Mia before John can intervene. The police arrive and shoot the man and find that the woman killed herself while holding Mia’s doll and drew a weird symbol on the wall in her blood. While recuperating from the attack, Mia sees on the news that the female stabber was the daughter of the neighbors that she killed. She also starts seeing weird things happening around the house like things moving, seeing people that disappear, popcorn tries to burn her house down. Y’know, the usual.

Can my entire review for a movie be the word “meh?” Probably not, but I will still use it in this review. I was a bit surprised because of all the talk I had heard about this movie that it just turned out to be okay. It had its moments, but there just wasn’t much significant about it. It progressed like almost every other haunting movie but this time there was a doll. A doll that no one realized was evil till it was possessed by a dead lady even though it looked like it would give the Devil nightmares before it was officially evil. But at least the setup for how the doll became evil was somewhat interesting with the whole devil worship, Helter Skelter thing.

The story doesn’t make much difference in these movies to be honest. What really matters in a movie like this are the spooks. They actually do fairly well with this. The scares are pretty well done and some are fairly clever. It was pretty interesting when Mia was finding the kid-drawn pictures of a garbage truck approaching her baby, even though the final one had the baby dead before the truck had technically hit the baby. But then when it actually happened it turned out to be a dream or something, and it turns out that stole that stroller moving on its own thing from Ghostbusters 2. I also thought it was really well done when that little girl ran down the hall and turned into the older Annabelle. That spooked me somethin’ fierce. It was also pretty effective when the pastor guy was knocked back from the door at the church, and it just made me wonder why the church wouldn’t just sanctify the entire plot of land the church was on. You can only do the building but can’t be bothered to spray some holy water on the sidewalk? They weren’t always that well hidden though, like the whole thing with the sewing machine. I got uncomfortable every time Mia was using it and they got a close up on her fingers, practically telling the audience that eventually some shit was going down with this sewing machine. When it eventually happened, I was disappointed that they seemed to build it up so much just to have her get a minor boo-boo on her finger. So the spooks were fairly good and clever when they happened, but it also shined a light on all the in-between times that were pretty slow and not very interesting.

I suppose I had no problems with the performances in the movie, but I generally have problems with the characters. Like Mia was a terrible person. She seemed fine through most of the movie, but then we find out that when she falls when she’s pregnant, she tries to break that fall with her pregnant belly. It’s a wonder that baby Lea was born and seemed normal, and even more amazing that the baby grows up to be the princess of Alderaan. And besides Ward Horton being delightfully Aryan and Tony Amendola making me believe he was Salieri from Amadeus, I have nothing to say about anyone else in the cast. They were good and didn’t do too many stupid things.

Annabelle wasn’t a bad movie; I just have no idea why people were bothering to talk about it. The Conjuring was just okay, so seeing a prequel to it certainly wasn’t inspiring to me. And the fact that it was about a haunted doll wasn’t doing it for me. And after seeing the movie, I still don’t really know why it’s being talked about. The story is okay, some of the scares are clever and well done, but it’s overall just nothing special. I’d say the movie is fine for a rental eventually, but it really doesn’t have anything that inspires me to say you should see it now. Annabelle gets “May God have mercy on your soul” out of “I like your dolls.”