In High School, I Was Ally Sheedy 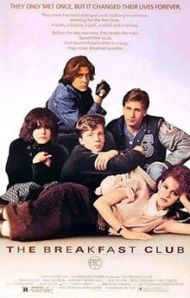 Today’s movie was requested a pretty long time ago but, when Ashley requested it, she also said that she would bring me the movie so I could review it.  I waited and waited until I eventually gave up and put it on my Netflix queue, but low enough that I could still remove it if she ever remembered to bring it in.  She didn’t.  So it finally surprised me when it arrived via Netflix and, once I had decided against writing the review and making her wait for it for another couple of months, I decided to sit down and review the movie.  I had seen this movie before, but I don’t recall it making much of an impact on me.  It made plenty of impact on so many other people in the world, but did not with me on my first viewing.  Let’s see if I’ve changed my mind as I review the Breakfast Club, written and directed by John Hughes, and starring Anthony Michael Hall, Emilio Estevez, Ally Sheedy, Molly Ringwald, Judd Nelson, Paul Gleason, and John Kapelos.

Five students at Shermer High School are brought together on a Saturday for detention, run by assistant principal Richard Vernon (Paul Gleason).  The students are familiar with each other, but far from friendly as they all come from different, but easily classified social cliques.  There’s the brain, Brian Johnson (Anthony Michael Hall), the athlete, Andrew Clark (Emilio Estevez), the basket case, Allison Reynolds (Ally Sheedy), the princess, Claire Standish (Molly Ringwald), and the criminal, John Bender (Judd Nelson).  They are told not to speak, not to move, not to sleep, and that their time should be best spent writing an essay about who they think they are.  Vernon then goes to his office across the hall where he’ll be able to hear if they mess with the bulls.  Their day is spent in various ways that lead to all of the students getting to know each other a little bit better, and find out that they have more in common than they would’ve thought.

I feel vaguely conflicted on my thoughts on this movie.  It’s definitely a good movie, and arguably one of the best of all the high school movies, but I just don’t find it that interesting.  I guess I just remember high school enough to remember that there are clear social classes that don’t intersect very much, so none of that comes as a surprise to me.  The movie is amusing, but never really reaches funny for me.  That’s the issue with this movie to me: nothing really happens that’s all that interesting, but the movie is really well-written.  On one hand, it’s a deep and insightful look at the social structure and psychology of high school students.  On the other hand, it’s five kids sitting around a library chit-chatting for 2 hours.  At first, all the characters seem to fit very snuggly into their stereotype.  This came to a head when they started eating lunch because all of the food they chose for them was so stereotypical.  The princess had sushi, the athlete was carb-loading, the basket case put Captain Crunch and Pixie Sticks between bread, the brain had peanut butter and jelly with the crusts cut off, and the criminal had the brain’s lunch.  If the movie had remained this way all the way through, no one would’ve thought anything about it.  But, as they say in the speech that ends the movie, the students come to find that they have a lot of things in common and some pretty dramatic stories are told in the meantime.  The criminal’s recreation of a day in his household was pretty tragic, and the athlete’s story about taping a kid’s butt together starts off funny, but starts getting very tragic as he reveals what he had been thinking about that would happen to the kid as a result of it.  The princess reveals that she’s being used by her parents to get back at each other, the brain reveals that he was considering suicide because he got an F, and the basket case doesn’t have friends and came to detention voluntarily.  John Hughes was clearly a master of the genre and had a deep insight to the way high school students acted and thought, and that’s what really sets the movie apart.  Otherwise there are a few cute moments, but no real laughs and nothing much going for it.  The insight is the real reason to watch the movie.  That and the song.  Ironically, I think no one would remember the Simple Minds song “Don’t You (Forget About Me)” were it not for this movie.  Even before I had seen this movie, my arm would automatically raise into the air in a fist-pumping motion whenever I heard the song.  Thankfully I’ve seen the movie now, so I at least know why it’s happening.  I still feel like I should see a doctor about it.

I think that anyone watching this movie starts to figure out which one of these groups they fit into in high school.  I was no different.  The only thing different about it is that I’m posting it on the internet for the world to see.  It makes me somewhat sad to admit it, but I was either the brain or the basket case.  I had a parent that stressed the importance of grades above almost all else, but I never really felt it was important enough and never really got the grades or the anxiety about grades to be full brain.  My sister would’ve been pretty brain.  I remember her crying over a C, which I would’ve said, “Good enough for me!”  But I did have a very limited number of friends, never really talked to people that often, and spent most of my time in class drawing.  So I’m definitely leaning a lot more towards the basket case category.  I definitely wouldn’t have had much in common with the other three.  I was in track once, but generally had very little to do with sports.  I was far from a bully or a criminal.  I kept to myself, never really broke laws and rules, and definitely didn’t bully people.  I only recall getting detention once or twice, and usually just for being a dumbass with one of my friends in class.  I’ve never felt I was much of a princess either, and not just because of my genitals.  But we were more middle class and definitely not rich, and I also wasn’t very popular.  So yeah, in high school I was Ally Sheedy.

The performances were all very good in the movie.  They all exemplified the character they were trying to very well, and then even went a little bit deeper.  Ally Sheedy was the stand out for me.  Sure, Molly Ringwald is super cute, but I found myself more attracted to Sheedy.  She was cute and wacky and I dug that more.  Judd Nelson was mostly unlikeable through the entire movie and didn’t really become vulnerable and accessible more than about twice in the movie, and didn’t become likeable until the end.  Emilio Estevez impressed me when he gave the whole speech about taping the kids butt together because of his emotional reaction to it.  I also thought his little “high dance” was funny because it looked so similar to Kevin Bacon’s angry dance in Footloose.

I found the Breakfast Club to be an interesting movie because of the insight it showed, but not extremely interesting beyond that.  It’s not really meant for someone in my current age range, though.  I’m sure I would’ve been much more into it in high school when I could’ve identified stronger with the whole “parents just don’t get it, man” side of the movie.  It’s still a very well written and insightful movie, but part of me still feels like I’m just watching five kids sitting around a library.  I still feel that this movie is one everyone should see at least once in their lives.  I just don’t think I’m going to feel the need to buy it.  The Breakfast Club gets “Each of us is a brain, and an athlete, and a basket case, a princess, and a criminal” out of “Sincerely yours, the Breakfast Club.”