You Cast a Big Shadow 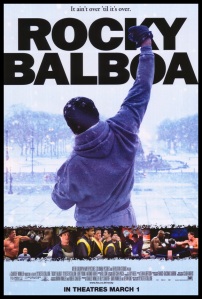 16 years after the last Rocky Balboa, Stallone tries to give it another go.  I would say that I had definite mixed feelings going into this movie.  I too was unhappy with the way Rocky went out, but with the way the other Rocky movies had gone, this sixth installment would surely be one of the worst movies ever.  The franchise had slowly been dragged down with each successive movie, and this one had the potential to be the nail in the coffin.  On the other hand, much like Rocky himself was always so prone to doing, this movie could potentially elevate the series, reminding us of what we loved about the movies in the first place.  Let’s see which it was in my review of Rocky Balboa, written, directed by, and starring Sylvester Stallone, and also starring Milo Ventimiglia, Antonio Tarver, Burt Young, Geraldine Hughes, Tony Burton, James Francis Kelly III, Talia Shire, and Mike Tyson.

One time boxing champion Rocky Balboa (Sylvester Stallone) has fallen on some hard times.  He’s in his late 50’s and retired from boxing 16 years ago.  His wife Adrian (Talia Shire) died of cancer in 2002 and his relationship with his son Robert (Milo Ventimiglia) is not doing so well.  Rocky still has Paulie (Burt Young) and Rocky also owns a restaurant named after his late wife.  In the world of boxing, the current, undefeated champion, Mason “The Line” Dixon (Antonio Tarver), is openly mocked for never having been really challenged in the ring.  Dixon’s temperament is not helped by a computer simulation run on ESPN that puts Rocky (in his prime) against Dixon and Rocky is shown to be the victor.  Dixon gets pissed about the simulation, but Rocky gets to thinking that he might get back into fighting, though only in small venues.  When he gets his license approved, Dixon’s promoters talk Rocky into fighting an exhibition match against Dixon in order to ride the buzz created by the simulation.  Does Rocky still have what it takes to go toe to toe with the champion?

Oh, thank God!  They didn’t ruin the series.  This is probably the most emotional Rocky movie in the franchise.  Yes, it definitely follows the Rocky pattern, but much like the first Rocky movie, this movie focuses more on the emotion side of the story than on the boxing side.  When the movie started, Adrian was already dead, and this started me off a little depressed.  Then we see Rocky dealing with his son, and that made me a little more depressed, but mostly just annoyed at his son.  If the little jerkface is so mad at being in his father’s shadow, then maybe he should do something with his life instead of just complaining.  Little snot.  Then we see Rocky dealing with Paulie, and that’s even more depressing.  I appreciate the focus on the story, but I was beginning to think this new movie was just going to be a massive bummer.  But, when Rocky starts training for his fight, it stops being a bummer.  Of course it begins to focus more on the sport and the underdog stuff, but in the background is the emotion.  What gets him through in the end is his own determination.  I think it’s a good message that they deliver in the movie that’s hidden under a boxing metaphor: “It’s not about how hard you can hit; it’s about how hard you can get hit and keep moving forward.”  I was happy that they didn’t go for the romance that they kept hinting at with the Marie character, I felt like that would’ve taken away from my memories of Adrian.  I don’t want to think of Rocky with someone else.  Rocky goes with Adrian.  End of story.  I was also happy that Robert and Paulie stopped annoying me and helped Rocky out in the end.  And I was also happy that ego didn’t make Stallone make Rocky win.  Just like in the first movie, not having Rocky win in the end shows that the boxing is not the driving force in the movie.  I felt like the actual fight that ended the movie was not that interesting, but it was very realistic.  It was a very interesting and wise decision on Stallone’s part to use the actual HBO boxing crew to film the fight.  It definitely made it look like we were watching a slightly more cinematic version of a real boxing match.  Unfortunately, I typically find boxing a little on the boring side, so I tend to actually prefer the more over the top stuff against gigantic Russian dudes.

I think Stallone puts on the best performance that I’ve ever seen from him in this movie.  He’s a lot like the other versions of Rocky we’ve seen before, but also noticeably broken after the loss of his wife.  He also has a couple of times when he needs get emotional about it, and he does it very well.  It’s not the “trying too hard” type of crying that he did when Mickey died; it’s the kind of crying you’d expect from a character like Rocky, with Rocky trying to hold it back, but the tears are slipping out.  He’s also freaking massive for this movie.  Way bigger and more ripped than he’s ever been in the other Rocky movies.  Burt Young was a lot like the Paulie we’ve come to know from the other movies, but he had a couple of good emotional scenes as well.  Milo Ventimiglia made a pretty good son for Rocky, and I found him more annoying in the way he was written than the way he was performed.  He didn’t have a lot to do in the movie, though.  I’ve taken issue with the selection of a real boxer in the review for Rocky V, but Antonio Tarver did his part well.  He had to do a couple of scenes where he got pissed off, but Stallone smartly didn’t write anything for him that he wouldn’t already be accustomed to from press conferences and actual boxing.

I was very happy to see that Rocky Balboa ended the franchise on a good note, far superior to Rocky V.  The story is reminiscent of the first movie and, thankfully, focuses more on the emotion of the story than simply on the boxing.  It successfully tugs at the heartstrings of the audience, and gives them a well shot and fairly satisfying conclusion.  After this movie, I can only hope he leaves the franchise alone and doesn’t risk injury to an otherwise satisfying franchise.  I definitely recommend watching Rocky Balboa and, now that all of the movies have been reviewed, I can say that the only movie in the entire series that has nothing really worth watching is Rocky V.  And so Rocky Balboa gets “The only kind of respect that matters is self-respect” out of “Let’s start building some hurting bombs.”