Waiting for a Written Invitation? 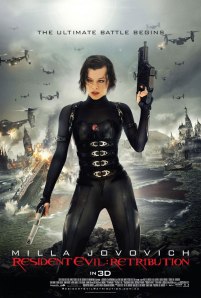 Why would someone feel so compelled to watch 5 movies in a series that was never really that good to begin with?  I don’t have an answer to that question.  I do know the person that would do such a thing: me.  Every time this series releases a new movie, I feel like there’s no way I’m going to watch it.  I let it get all the way through the theaters too.  But when it comes to DVD, I always check it out.  There’s no excuse for my actions.  I’m contributing to this.  It’s like I’m watching Keeping Up with the Kardashians or the Jersey Shore or something.  But I can’t help myself.  And so you will be dragged into my psychosis as I review Resident Evil: Retribution, written and directed by Paul W.S. Anderson, and starring Milla Jovovich, Li Bingbing, Shawn Roberts, Sienna Guillory, Aryana Engineer, Johann Urb, Kevin Durand, Boris Kodjoe, Michelle Rodriguez, Oded Fehr, Colin Salmon, Megan Charpentier, and Mika Nakashima.

Alice (Milla Jovovich) is a normal housewife that lives with her husband Todd (Oded Fehr) and their deaf daughter Becky (Aryana Engineer).  OR IS SHE?!?!  No, she’s actually a zombie killing machine.  Well, one of her is.  There’re a lot of clones in the Umbrella facility she wakes up in.  The real-ish one wakes up and is getting interrogated by Jill Valentine (Sienna Guillory), who has been brainwashed by Umbrella.  Alice escapes to find herself in a giant, underwater facility designed to test the zombies or some shit.  We spend the rest of the movie watching Alice escape this facility with the help of Ada Wong (Li Bingbing), Leon Kennedy (Johann Urb), Barry Burton (Kevin Durand), and Luther West (Boris Kodjoe), who have all been sent by Albert Wesker (Shawn Roberts), who is a good guy now, I guess.  The Red Queen (Megan Charpentier) is also back, and she uses clones of Alice’s original team – Rain Ocampo (Michelle Rodriguez), Carlos Olivera (Oded Fehr), and James Shade (Colin Salmon) – to try to stop them.

This movie is exactly what you expect.  I think it was Jonah Ray on the Nerdist podcast that acknowledged that these movies are lower class cinema, but that he could not help but be excited that they were coming out.  I never get so far as to say that I’m excited for them to come out, but they are enjoyable in their stupid simplicity.  The same goes for this movie.  It’s definitely not a good movie, but it’s enjoyable if you just shut your brain down and watch.  That’s the way they’re meant to be watched; with an aneurism.  They don’t really seem to be trying too hard either.  First off, the story is really not much more than Alice trying to figure out how to get out of a facility.  And that facility is full of various landscapes representing different places in the world, so they’re going to act like Alice is spanning the globe on the poster for the movie even though she’s not leaving that one facility.  But don’t worry; if you forget that all these places are fake, everyone in the movie will need to remind Alice several thousand times.  But she’s pretty, so brains are really irrelevant.  The same kind of goes for the writers of this movie and their ability to pull off some sweet one-liners.  They all fell completely flat.  Alice hits some baddies with a, “Hey boys.  Bad idea,” when she blows a car up in their faces.  You’re not even trying now, guys.  Bad idea works if you blow up a light bulb in their face or something.  That situation demands more of a “Here’s your ride” line.  I’ll need to refer you to Batman & Robin for proper usage of horrible one-liners.  Then you miss out on another good opportunity after Leon proclaims, “We’re gonna be okay,” and you didn’t have the Red Queen pop up and say, “Activating ‘Famous Last Words’ Protocols.”  It also bummed me out that it seemed clear that this game was not made for fans of the Resident Evil games, or even gamers for that matter.  All gamers know about the concept of a weak spot.  And all Resident Evil fans remember that the way to beat brainwashed Jill was to shoot the giant red spider brooch in the center of her cleavage.  And it wasn’t just obvious because all gamers were probably staring at her sweet rack.  Well it took this killing machine lady about 15 minutes before someone else told her to shoot at the bull’s-eye between Jill’s tits.

The look and the action in the movie worked out pretty well throughout.  The first scene in the movie was interesting because they were basically playing the last scene of the previous movie in slow motion reverse.  And, for a while, I thought they were going to play the entire movie in reverse because it went on so long.  But the movie seemed completely aware of the fact that its story wasn’t going to support it, so it made sure it was decently full of action.  The hallway battle early on in the movie was pretty sweet, even though it didn’t really have anything to do with the story.  I didn’t really care though because I didn’t really care about the story.  That way, it’s perfectly fine to make your action scenes just a bit of jerkin’ off because it had been three minutes since something blow’d up.  When the executioners showed up later, I was a little bit thrown off over how much they were ripped off from Pyramid Head from Silent Hill, but I’m pretty sure I remember them from the game too, so I can’t really blame the movie for that.  I also realized that this movie had a total Star Trek thing going on because guys wearing masks were the red shirts of this thing.  Michelle Rodriguez and Oded Fehr would come out of battles unscathed because they had the sense to not cover their faces.

Most of the performances were entirely acceptable and not much more.  I thought it was cool that they got the original team from the first movie back for this one, but I also thought it got a little confusing that there were like 4 versions everyone.  The only thing I thought about Milla Jovovich is that her housewife character was fuckin’ stupid for throwing away her baseball bat after one use.  That shit still works.  Li Bingbing was also pretty good.  Her performance wasn’t anything special, but she looked good in that Ada Wong outfit.  I did have some problems with Sienna Guillory.  She definitely looked the part, and definitely had some sweet knockers, but she delivered her lines super robotic and paused in weird places.  I guess she could’ve decided that it was the way someone who was brainwashed would act, but I just felt like she decided to let her tits do the talkin’.

Resident Evil: Retribution is exactly what I’m sure everyone expects.  It’s a big, dumb action movie.  And it lives up to every bit of it.  It’s so huge in scale that it’s unsatisfied with the idea of having their movie appear as if it was filmed in only one global hemisphere.  And, even though the story was weak, the action was fun and frequent.  It will probably not be the last time I say it about the Resident Evil franchise, but you know what you’re getting and it always delivers.  I wouldn’t necessarily recommend you buy this, but it’s a fun rental.  Resident Evil: Retribution gets “I’m kinda enjoying myself” out of “I’ve heard that before.”