Who Here That is Not Amish Makes Their Own Applesauce? 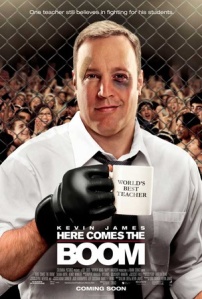 Along with probably everyone else in the world, I had no interest in seeing today’s movie.  But, every once and a while, I need to watch a movie I expect to be shit.  Whether it’s to punish myself, to toughen myself, or to just give me something to make fun of, I occasionally need to pick a movie I have no interest in from the old RedBox.  We already found out how that worked out when I picked up Taken 2, but that was not the only movie I rented that day.  I also picked up Here Comes the Boom, written by Allan Loeb and Kevin James, directed by Frank Coraci, and starring Kevin James, Henry Winkler, Salma Hayek, Bas Rutten, Charice, Greg Germann, Gary Valentine, Reggie Lee, and Krzysztof Soszynski, with special MMA appearances from Joe Rogan, Mike Goldberg, Herb Dean, Wanderlei Silva, Chael Sonnen, Jason “Mayhem” Miller, Mark Muñoz, and Herb Dean.

Scott Voss (Kevin James) is a biology teacher that’s lost his spirit.  He is further disillusioned when the most passionate music teacher the world has ever seen, Marty (Henry Winkler), is laid off due to budget cuts.  He decides that he should attempt to raise the $48,000 needed to help Marty keep his job.  In the most ham-fisted coincidence I’ve ever seen in a movie that wasn’t making fun of the ham-fisted coincidence, Marty finds out that one of the students in his citizenship class is a former mixed martial artist named Niko (Bas Rutten), and he finds that he can make $50,000 for winning a professional MMA fight.  He and Niko reach an agreement that he will train Niko to become a citizen if Niko trains him to fight.

I hated this movie for the greater majority of my time with it.  Of course, I wanted to hate it when I rented it, but the greater majority of it supported what I wanted to think of it.  It really wasn’t funny, and the story was pretty dumb.  It was basically the story of Rich Franklin’s life if Ace also had an eating problem.  And I’m sure we’ve all seen the joke in self-aware comedies when they have to raise a certain amount of money and that exact same amount of money is the award in some contest that’s posted on a giant sign right behind them.  Those are the ones where the movie says, “How are we ever going to make the money to do this thing?” but the writers were obviously saying, “How are we ever going to get from point A to point B?”  It’s nice to think that they did this ironically, but it really didn’t feel that way when watching it.  Doesn’t matter anyway because plenty of movies are started with dumb premises just to get the comedy going.  This movie never succeeded in the comedy.  It attempted it with mostly slapstick comedy and Kevin James doing vaguely embarrassing things, but it never managed to get a snicker out of me.  It’s in no small part related to the heavy-handed criticism of the school system that made up most of the aforementioned “point A” in the movie.  I’m not saying you don’t have a point, but I don’t rent stupid comedies for your political agendas.  But here’s the really weird part of this review: with all the failures it had as a movie and as a comedy, I actually left the movie happy about it.  I know!  I feel weird even typing it!  I started noticing it when I realized I was actually excited leading up to and during the final fight in the movie.  And, though it’s predictable and ludicrous, it ends with a good message that is somewhat inspirational and actually warmed my heart.  It grew three sizes that day.  And then it exploded.  But that’s just because I have a condition.

The cast of the movie all did well enough.  I wouldn’t necessarily blame any of them for the lack of comedy.  Except maybe Kevin James.  He WAS a writer on the movie, after all.  But he was good in the movie.  He’s always pretty likeable in the movies he’s in, even if a greater majority of those movies are not likeable at all.  And he seemed to commit a lot to the role and got into fairly good shape.  Well, good shape for him anyway.  He’s still got a pretty mean gut on him, but you can see a lot of upper body definition.  I should move on.  I’m sounding kind of gay.  Salma Hayek was in this movie!  She was a great choice, assuming you can get over the common “That guy could never get that girl!” thing that you see in movies.  But she was charming and, more importantly, as hot as ever.  Henry Winkler is also great.  He might not remind you of your grandfather, but he probably reminds you of what you wish your grandfather was like.

Here Comes the Boom was a failure as a comedy, but not that bad as a movie.  I don’t recall finding anything amusing while watching the movie, but the ending was a solid fight and a heart-warming happy ending which started to win me over.  Still, that’s an hour and a half to sit through for a solid 15 minutes at the end, so I don’t think I’d recommend it to anyone.  You could do worse for a dollar at RedBox, but there are probably better ways to spend 2 hours.  Here Comes the Boom gets “I’m out there getting my ass kicked!” out of “Now if you’ll excuse me, I have to roll around with a sweaty guy from Holland.”