You Deserve to Live With This 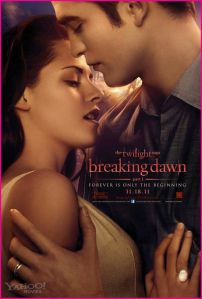 Today is a good day.  I woke up around noon, had a nice breakfast, and sat down to watch the fourth Twilight movie.  Yeah, that last part doesn’t seem to fit within the “good day” category, but I’m staying positive.  No matter how good or bad this movie is, I’m done watching Twilight movies until sometime in November.  And, since there’s no way I’m paying to see a Twilight movie in theaters ever again (I was already burned by that once with the first movie), I won’t have to watch Twilight again until it comes out on DVD and I can beat up some emo high school girl for her copy of the DVD outside of a Best Buy so that they’ll get no more money from me whatsoever.  Or I can rent it from RedBox.  We’ll see.  And we’ll also see what I thought of the fourth Twilight film today, in my review of The Twilight Saga: Breaking Dawn Part 1, based on a novel by Stephenie Meyer, written for the screen by Melissa Rosenberg, directed by Bill Condon, and starring Kristen Stewart, Robert Pattinson, Taylor Lautner, Peter Facinelli, Elizabeth Reaser, Nikki Reed, Ashley Greene, Kellan Lutz, Jackson Rathbone, Billy Burke, Sarah Clarke, Julia Jones, Booboo Stewart, MyAnna Buring, Maggie Grace, Casey LaBow, Chaske Spencer, Christian Camargo, Mia Maestro, Michael Sheen, Jamie Campbell Bower, Christopher Heyerdahl, and Mackenzie Foy.

Bella Swan (Kristen Stewart) is having her soon-to-be “sister”-in-law Alice Cullen (Ashley Greene) plan her upcoming wedding to Edward Cullen (Robert Pattinson) because Bella is too busy trying to fit a square-shaped block into a round peg hole with a squeaky mallet.  The wedding goes smoothly, finding one hiccup when Bella tells the guy that she’s been stringing along, Jacob Black (Taylor Lautner), that she intends to consummate her marriage with Edward on their honeymoon.  Though this is fairly typical, Jacob gets pretty angry at Bella for taking the risk, fearing that her vampire husband will eat her, but in a bad way.  Their honeymoon starts off fairly nicely.  Edward kills Bella…’s pussy!  HAHA!  But he stops having sex with her when he realizes that he’s bruised her arm during the coitus.  Two weeks into the honeymoon, Bella inexplicably figures out that she’s pregnant with Edward’s demon baby.  They return to Forks so that the Cullens – Dr. Carlisle Cullen (Peter Facinelli), Esme (Elizabeth Reaser), Rosalie (Nikki Reed), Alice (Ashley Greene), Emmett (Kellen Lutz), and Jasper (Jackson Rathbone) – can help them figure out what to do.  Jacob comes over to find Bella – 4 weeks pregnant and incredibly showing, somehow – and gets mad, thinking this baby will kill Bella.  Yet, when Jacob’s werewolf brethren decide they will kill the abomination inside Bella, Jacob leaves the pack with Leah (Julia Jones) and Seth Clearwater (Booboo Stewart) to protect Bella.

Much as Eclipse, I feel that Breaking Dawn was thoroughly okay, but for different reasons.  They finally got a little closer to writing a decent story, but it was kind of boring as well, not having any real action until the end.  I’m not saying there needs to be epic vampire throwdowns in every one of these movies; I know that these movies are just supposed to be sappy romantic movies that suck the coolness out of the vampire genre.  But if you’re not going to base your movie around the action, then you need something to keep the audience paying attention.  This movie could’ve used some tension to it, but they never really succeeded on any.  Without that, you’re just watching someone’s wedding video.  Yeah it’s pretty, and women are probably going to cry, but I’ve fallen asleep.  I was hoping that someone at the wedding would get a papercut to make it more interesting.  Then Bella and Edward go to Rio de Janiero, of course stopping by to show that giant Jesus on the hill, and get to the sex.  I have a problem with this scene that may be a little icky.  If Bella was, in fact, a virgin, and Edward was breaking her hymen for the first time, would there not be a strong possibility that there would be a little bit of blood?  I know it’s probably not how they wanted their series to end, but I would’ve thought it was amazing if that happened and Edward tore Bella to shreds because of his bloodlust.  There are holes in my logic, since the last movie said that Edward was no longer blood-crazed with Bella, but it was a golden opportunity to end this series once and for all.  Instead of relieving the world of Bella, they make another one, while simultaneously deciding to ignore logic.  I consulted my many currently and recently pregnant friends and this movie was way off.  She is already looking in the mirror for signs of showing at 2 weeks, and claiming she can feel the baby in there.  My friend Mike said that a baby would be the size of a poppy seed at 4 weeks (when Bella was fully showing, more closely resembling something around 6 months preggers).  Liz and Sasha tell me that about 5 months is when you first feel a baby, so they were only about 18 weeks off.  I know that the easy answer to all this is “Meaghan, Liz, and Sasha weren’t pregnant with undead demon babies as Bella is”, to which I respond “Fuck you”.  You drew her pregnancy out long enough that it felt like I’d been watching it for 9 months, so you might as well have gotten it right.  And what’s even more of an oversight on the part of the filmmakers is that Bella CLEARLY didn’t unlock her HTC Android phone when she put it up to her head and started talking to Rosalie.  I caught you again, Twilight!  Not much later in the movie, they have a pretty goofy conversation between a pack of giant, CG wolves that I was warned about, but I really didn’t find it that off-putting.  I know a lot about canine mannerisms, and I appreciated that they seemed to take them into consideration when it came to the main two wolves establishing dominance.

I found most of the movie fairly lackluster and a little boring.  The redeeming qualities of the movie can be found in the end of the movie, but it will also require a ::SPOILER ALERT::  The wolves attack the Cullens right after Bella has seemingly died during childbirth, but the baby, Renesmee, is alive and well.  Edward, Alice, and Jasper are prepared to throwdown to save the baby.  They’re outnumbered and are losing until Carlisle and Esme return, but it’s not until the wolves Seth and Leah (that have heretofore hated the Cullens) join in to help them.  And it’s finally won when the pack must leave because Jacob “imprinted” on Renesmee, which I think means he peed on her, but it also means that the wolves can’t harm her.  I had heard about this imprinting thing long before this movie came out and it was very off-putting.  The idea of an 18-year-old guy falling in love with a newborn baby is more than a little bit icky.  And now that I’ve seen the movie and done a little bit of research on imprinting, it’s still a little bit icky, but at least somewhat excusable.  Because it’s involuntary and keeps the imprinter alive as long as the imprintee, one can assume that it won’t become icky until Renesmee is of a non-creepy age.  Although, for the next 18 years, I’m probably going to think it’s a little creepy.  It also served the story a great deal, putting a permanent end to the feud between the vampires and the werewolves that I never thought made sense in the first place.  The battle at the very end of this movie was pretty good, but not in the same league as the big battle with the newborn vampires from the last movie.  The CG wolves didn’t really work that well for me.  Neither did the very ending itself.  We know that Bella is turning vampire, but they drag it out for like five minutes.  They start letting the CG that turned her into an Ethiopian melt away while showing easy scenes from previous movies (maybe they ran out of money somehow), But they decided to show that her ribs were repaired by having her chest pop out like you just finished a game of Perfection.  (Anyone remember that game?  Google it)  Well it was gross and goofy.  Also, they drag out the scene of her laying on the bed and showing her entire life up to that point, then zoom in on her eyes and hover there for approximately 37 minutes, even though we all know what’s going to happen.  Pretty much any time anyone zooms in on someone who may or may not be dead’s eyes, we know they’re going to pop open.  Can we come up with a new way to do that?  ::END SPOILER::

The performances, as with the actors, have barely changed in this movie.  Kristen Stewart’s performance actually improved near the end of the movie.  Well, she looked like she was dying, so I enjoyed it more.  At the end, her performance was much worse because now she’ll be around forever.  Of course, that just means I won’t be.  Her performance didn’t change very much for the parts where she was sickly.  Knowing that she couldn’t convey dying with her performance, they just did it with CG instead.  It was vaguely convincing.  Robert Pattinson has still done nothing that I feel is a detriment or an asset to these movies.  Taylor Lautner has a part where he has to cry, and does well enough at it, but otherwise joins Pattinson in the mediocrity box.  My opinion of the remaining Cullen clan was mostly unchanged in this movie, but it was nice to see Rosalie not be a dirty bitch for a little while.

There’s really no telling if I enjoyed this movie more than it deserved because I have roughly a year without having to see another Twilight movie.  I’m just so happy, you guys.  This movie has a story that wasn’t that bad, but was dragged on far too long.  The redeeming part is at the end, so unfortunately you’ll have to sit through the whole thing to see the good part.  Only, that is, if you actually think there’s any reason to see even the good part, which there still isn’t.  You still don’t need to watch this movie.  If I had to write a list of the Twilight movies from the most tolerable down, it would go Eclipse, Breaking Dawn Part 1, the end.  I don’t count the first two as movies.  Unless Stephenie Meyer decides that she needs another wing for her mansion, we have only one more of these things to go, but not for a while.  So, I thankfully give The Twilight Saga: Breaking Dawn Part 1 “You have to accept this for what it is” out of “It’s crushing you, from the inside out.”