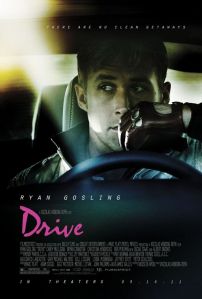 Today I headed out to the theater with my roommate to watch a movie.  I had not heard much about the movie beyond Ryan Gosling plays an assassin (which he actually doesn’t) and I made the assumption that there was to be some driving in this movie, based mainly on it’s title.  The movie was Drive, starring Ryan Gosling, Carey Mulligan, Bryan Cranston, Albert Brooks, Ron Perlman, Oscar Isaac, and Christina Hendricks.

Drive is about an unnamed stunt driver (Ryan Gosling) who works in a garage belonging to Shannon (Bryan Cranston) and also moonlights as a getaway driver.  He’s apparently really good at driving.  So good that Shannon goes to mobster Bernie Rose (Albert Brooks) to get financing in order to back the Driver and enter him into NASCAR.  Bernie agrees once he’s seen the Driver live up to his namesake and parallel park like no other.  Bernie’s brother, Nino (Ron Perlman), isn’t excited about his brother’s new business venture, but doesn’t pay it much mind.  Back at the Driver’s apartment (which is super shitty for someone with 3 high paying jobs), he starts getting close with his neighbor Irene (Carey Mulligan) and her son Benicio.  But then her husband, Standard (Oscar Isaac), comes back from jail to rejoin the family.  The Driver comes home to find Standard badly beaten with Benicio looking on.  He finds out that Standard owes protection money and was beaten because he refused to take on a job to rob a pawn shop.  The Driver agrees to help Standard with the job in order to get him and his family out of the situation for good.  The heist turns out to be a set up by Nino to steal a million dollars from the East Coast mob and Standard is killed.  Driver takes this opportunity to show off his other skills in killing people, but does not change his name to Killer.  I think that movie’s already been made.

For a quick version of the differing views between my roommate and I; he loved this movie, I fucking hated it.  But I’m the reviewer here, so his opinion can wait.  This movie moved so slow that I might have preferred a movie called PaintDry about a painter who moonlights as a painter and is the best there is at what he does.  And we watch that paint come to completion of it’s drying process.  There is a bit of a car chase in the very beginning where nothing really happens, so much so that I hesitate to even call it a car chase.  He gets spotted by a helicopter, then hides under a bridge and waits till it leaves.  He gets spotted by a cop car, speeds up a little, and hides in a stadium that’s just letting a game out.  After that, expect no action until about an hour into the movie when Standard gets shot.  In between, lots of awkward conversations between the Driver and Irene that move at about a sentence per minute.  When the action finally does happen, it’s somewhat exciting but usually brief, with a handful of really graphic deaths like stomping a man’s head to putty.  But this is one of those movies you see with a friend and ask them what they think afterwards and are completely shocked to find out they had the exact opposite reaction.  My roommate thought it was amazing.

This movie made a couple of odd decisions that pissed me off too.  (SPOILER ALERT)  And I say spoiler alert but I’d also feel pretty bad if you sat through this movie because of me anyways, but if you want to see this movie come back and read this after.  At one point, when the Driver has decided to take out Ron Perlman, he goes to the trailer of the movie set he was doing stunt driving on and grabs the mask he wears during the scenes; a creepy mask reminiscent of Michael Myers from Halloween.  But he didn’t use or need this mask!  All he does is drive up to the pizza place Nino owns and stands outside.  Then he wears the mask as he kills Nino.  But if you kill him on a beach away from everyone, why do you need anonymity?  And at the very end, the Driver kills Albert Brooks and leaves the million dollars with his corpse.  I know this is supposed to say something about the character of the Driver, but to me it says he’s a fucking idiot and the screenwriter is as well.  (END SPOILER)

The setting of this movie had me very confused throughout.  I could see that it seemed to be in LA, or at least somewhere very similar, and based on the cars being driven and the clothes Gosling wore (some really gay silver blazer with a gold scorpion on the back), I thought the movie was happening in the 80s.  The movie’s strange 80s-like soundtrack kept me thinking the same.  It wasn’t until about an hour and a half into the movie when I saw a stripper texting on an Android phone or something that I finally figured out this was supposed to be the present.  At that point I was probably more interested in the fact that I had managed to stay awake that long.  My roommate, however, loved the soundtrack.

The performances were the one good thing to the movie.  When Gosling wasn’t awkwardly talking with Irene, he was cool and calm in the most dire of situations.  The kind of badass character that I’d like to see in an action movie one day, and not so much in a pretentious art student’s version of an action movie.  Ron Perlman was probably at his least annoying in this movie.  Albert Brooks’ character was pretty awesome.  He was a very bad man that did very bad things to guys we liked.  I liked this for Albert Brooks.  I’ve never seen him play a character like this.  He was interesting every time he was on and, again, I think I’d like to see this in a good movie.  Bryan Cranston was also very good, but he typically is.  My roommate tells me that Christina Hendricks is famous from television, but I don’t know who she is and she left no impression on me whatsoever.  The problem with the performances is that I never gave a shit about any character in this movie.  But that’s not the fault of the performers, it’s the fault of the screenwriter.  Probably the director too, but he seemed more interested in throwing in unnecessary glory shots of LA at night than character development.  We don’t even get to know the name of the main character, for crying out loud.

When I left the theater, I looked on Rotten Tomatoes to find out if I was the only one who hated this movie.  I apparently was.  This movie received a 93% at the time I’m writing this.  I’m not sure if I just went into the movie with bad expectations or if this movie just sucked.  But since I’m the only one that hated it as far as I can see, my review is that you should see it and either agree with me or tell me why I should’ve liked it.  I give this movie a “Zzzzzzzzzzzz” out of “Wake up, we’re at Grandmas”.