Can Katy Survive a 2-Hour Show?  And Can Robert Survive a 1.5-Hour Katy Perry Movie? 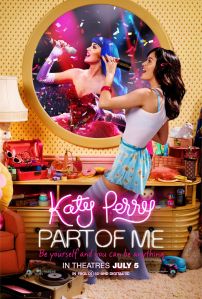 I’ve still been trying to fill any gaps left in the year 2012 as the end of the year approaches, but I think I might have been perfectly fine leaving this particular gap unfilled.  That was not an option for me as my friend Janet not only requested today’s movie, but provided me with a copy of it.  It is against company bylaws to refuse a request, regardless of how disinterested you are in both the movie and the subject matter of the movie.  After bracing myself for the worst, I sat down to watch … sigh … Katy Perry: Part of Me, directed by Dan Cutforth and Jane Lipsitz, starring Katy Perry and Russell Brand, and with cameos by some people I don’t know (or don’t want to know) named Kesha (I refuse to spell that with a dollar sign), Adele, Rihanna, Lady Gaga, Justin Bieber, Jessie J, Ellen DeGeneres, and Rebecca Black.

Katy Perry (Katy Perry) makes what some people call music, and this movie is about that.  She’s embarking on a concert and that apparently requires that a movie be made about it, since it is probably the very first concert in history.  During this concert, we learn how Katy Perry mutated from a gospel singer named Katheryn Hudson into an international pop sensation.  At some point, she also forgets how ridiculously hot she is and she actually gets bummed out that British comedian Russell Brand divorces her.

I’d like to start off this review by making a distinction.  There is a clear difference between saying, “This is not a good movie,” and saying, “I did not like this movie.”  I would say there was nothing really wrong with this movie, but I was definitely not the target audience, especially since going into this movie I could only say that I knew about two Katy Perry songs.  I personally could give two shits about Katy Perry, her music, or her life.  And that is the summation of the entire movie, leaving the movie to be kind of a trudge for the disinterested audience.  In its defense, I assume the movie’s actual audience would love this.  They get to get closer to someone they probably like more than is healthy and listen to her music that they like for whatever reason.  People like me will hear them say things like, “She just wants to be the first Katy Perry,” and feel the irony because her music seems like the 10th or so Britney Spears, or the 20th Tiffany, maybe setting herself apart by being the one in that group that has the sense to send great moral messages to her fans by strapping whipped cream sprayers to her tits in her music videos.  She also sings songs about fireworks, but she forgets that those things burn bright but they fizzle out in a few seconds.  She is taking way too long to fizzle out for my tastes.  I would say that one thing I did enjoy seeing in the movie was that Perry’s religious crackpot parents still loved their daughter, even though she spends a lot of her time half-dressed and shaking her cans for an audience.  And one thing that made me laugh was that Katy Perry used the term “Cray Cray” at one point, and the subtitle felt the need to translate that to “(Crazy)”, just in case the audience had a few people that weren’t stupid being dragged to it.

There’s probably not a whole lot to be said about the music and visual style of this movie.  If you have any intention of seeing this movie, I assume you already know what Katy Perry concerts look like and sound like.  For everyone else, the visual style is what happens if you raid a candy store and throw it up all over a stage.  I don’t know why I have to sit through seizure warnings on most of the video games I play, but this movie didn’t have one in the beginning.  There were so many colors smashed into every frame of this movie that I almost had a seizure.  I also resented that at no point during this movie did Katy Perry shoot whipped cream out of her boobs.  That’s the one thing I remember about her!  As for the music of the movie, it’s the typical pop stuff that I do all I can to avoid.  We hear all the songs that I assume she’s famous for, starting with the song that made her popular, “I Kissed a Girl”, which I always thought was called “I’ll Go Gay if You Pay Attention to Me.”  I did think it was a little strange – but also hilarious – that the movie juxtaposed scenes of Perry’s fans crying because of the profound experience of seeing Katy Perry in concert with Katy Perry singing a song called “Peacock” which, as best I can tell, is a song about Katy Perry demanding to see someone’s dick.  And it’s not even subtle about it!  It seemed like the lyrics were originally, “Let me see your cock,” and someone said they wouldn’t play that on MTV so she added “pea” so that no one would have any idea what she was singing about.  But I’m onto you, Perry!  I would also have to mention that my own bias against pop music made me resent things like opening the movie with someone playing a Katy Perry song on the violin and Katy Perry herself holding a guitar on numerous occasions.  “Instruments are reserved for talented people,” I would think to myself.  But, during the course of the movie, I learned that Katy Perry actually made music before she became famous, so I had to learn my lesson that the rare few musicians that are popular today can actually play an instrument.  I guess Katy Perry is one of them.

There’s even less to say about the performances in this movie than the look and music of the movie.  It’s mostly just people being themselves, or at least being the version of themselves that they want to be portrayed as.  I would say that Katy Perry herself comes off as very likeable in the movie.  Not only is she hot, but she’s also cute and goofy and very endearing.  I actually did feel twangs of sadness for her when she was crying before going up on stage because of her divorce with Russell Brand, even though I resent the fact that she’s acting like that’s even a speed bump in her life.  Does she realize how hot she is and how out of his league she is?  She’ll be fine.  The rest of the cast is filled by a bunch of other women I don’t give a shit about, like Jessie J, Lady Gaga, Rihanna, and Justin Bieber.  I don’t care about those ladies either.

I feel that my comments still indicate that I hated Katy Perry: Part of Me.  That’s not really the case.  The simple fact of the matter is that I am not the audience for this movie.  I have no interest in Katy Perry, her life, or her music, and her visual style feels like it could either give someone seizures or make them diabetic.  But the movie wasn’t painfully bad to make it through and Katy Perry came off as very likeable, and even managed to elicit an emotional response from me at one point in the movie.  The only way to make a recommendation for this movie is completely unnecessary as the people that would see it already have, and I don’t recommend it for anyone else.  Katy Perry: Part of Me gets “The bad that comes along with the good is a journey” out of “I got an ass like Nicki Minaj in this one!”