The Future of Our Land Depends on Those Who Are Truly Free. 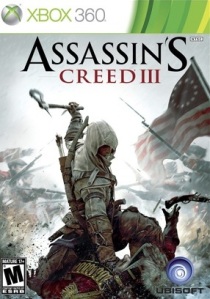 I was incredibly excited to get to play this game and, truth be told, I beat the game about two months ago but was so back-logged with other reviews that it’s taken me this long to get here.  Some of you may have already seen a quickie review of this game in my end of the year recap because it took me so long to review it.  But I’ve been a big fan of the series since its inception, so the game was certainly deserving of a full review.  Plus, there’s a chance that this game is the final game in the saga, so I feel that I need to send it off properly.  This game is Assassin’s Creed 3, developed by Ubisoft Montreal, published by Ubisoft, and including the voices of Noah Watts, Nolan North, Adrian Hough, Kaniehtiio Horn, Roger Aaron Brown, John de Lancie, Neil Napier, Allen Leech, Robert Lawrenson, Robin Atkin Downes, Danny Wallace, Eliza Jane Schneider, Margaret Easley, and Nadia Verrucci.

Desmond (Nolan North) and crew – William (John de Lancie), Rebecca (Eliza Jane Schneider), and Shaun (Danny Wallace) – are still trying to access a temple with the Apple of Eden, and use it to stop the end of the world.  …I don’t get it either.  To do so, Desmond gets into a machine that sends him back into his ancestor’s memories.  First, he becomes Haytham Kenway (Adrian Hough), who then fathers Ratonhnhaké:ton (Noah Watts) – who thankfully gets called Connor – with Connor’s mother, Kaniehti:io (Kaniehtiio Horn) – who I will call Unpronounceahontas.  Connor must stop the Templars in their plots in the American Colonies while simultaneously helping the Americas gain their independence.

I really liked this game (as you may have guessed from the quickie review in the Games of 2012 review), but it was not without its share of problems, most of which will not be found in this paragraph.  The story of the game was pretty good.  I’ve always kind of taken issue with the Desmond side of the Assassin’s Creed games.  They tend to be a little on the strange side.  The guy gets into a machine to allow him to access memories stored in his DNA while talking to ancient but super-advanced aliens and save the world with an apple.  But that’s a fairly minor section of the game, and that’s how I like it.  I don’t give a shit about Desmond.  But Altaïr, Ezio, and now Connor?  Yeah, that’s the stuff.  And Connor’s part of the story holds up as well as Altaïr’s and Ezio’s, but it does take its sweet time to get started.  I wanted to get into the Connor part of the story quicker because I didn’t see much point in getting attached to Haytham when I realized that he wasn’t my guy.  There wasn’t anything wrong with it, but I was in this to be Connor.  I even really liked the scenes of Haytham and Unpronounceahontas and their burgeoning relationship, but this guy isn’t going to participate in the Boston Tea Party, witness the Boston Massacre, chauffer Paul Revere on his Midnight Ride, and watch the signing of the Declaration of Independence.  Connor was!  And it was pretty cool to take part in all of those things, so I enjoyed it thoroughly when it got going.  There were a couple of minor qualms to be had with the rest of the story.  First off, the names of things.  The Mohawks seem like they had absolutely no interest in making their names easy on me while writing these reviews, and I think that’s very inconsiderate of them.  There was our main character, Ratonhnhaké:ton, his mother, Kaniehti:io, and the place they were from, Kanien’keh(‘a):ka.  Come on!  That can’t be real!  What possible use for colons, semicolons, and parenthesis would the Mohawk have?!  I guess, much like their philosophies in hunting, they felt like they must use all parts of the keyboard as they use all parts of the buffalo.  The endings were a little weak as well.  The defeat of Connor’s mortal enemy was a little anticlimactic, and I wasn’t that pleased with what happened with Desmond either.  I was happy they didn’t go with the typical ending with making the audience make a choice.  I just want to see YOUR story, not make my own.  Or, more accurately, I don’t want to have to look up the other ending on YouTube.

The controls of the game were what gave me the most trouble.  Not all of the time as it controls very similar to every other Assassin’s Creed, but I had never had so many problems with glitches in the other games.  There were times when the controls wouldn’t respond, I would run into invisible walls, icons wouldn’t show up when they were supposed to.  The worst one was when I was trying to climb a wall and I was inexplicably fired up into the air, only to come crashing down to the Earth and die.  It didn’t happen all the time, but even just a few times in such a big name title is extremely frustrating.  Otherwise, the game is exactly as you’d expect an Assassin’s Creed game to be.  And by that, I mean it’s awesome.  It’s like Dishonored if it didn’t punish you for killing bad people.  And the parkour is great, and improved for this game a little.  It’s mostly what we’ve done in the other games, but this game takes us out into the wilderness a lot more than the other games does.  And that means free-running through the trees.  It works very well most of the time, though it’s occasionally difficult to see your path clearly when trying to figure out which way to jump.  The side missions in the game were fun, but some were extremely tedious and others I just did not play the way they wanted me to.  Like the hunting stuff.  Connor was an effective, but very impatient hunter with me at the helm.  It would’ve been a fairly common sight to see Connor running through the frontier, trying to bum rush a raccoon in the brush.  And the board games were a constant annoyance for me.  I realize that the only reason I was even bothering with them was because I wanted achievements, but I found them really annoying.  One problem with playing a board game against a computer is that the computer knows how to play and what is going to happen way better than we do.  Another problem is that I don’t really want to play these things.  I don’t need the money, so I’m just forced to play the stupid things for the achievements.  And Six Man Morris is a horrible piece of shit of a game.  I want it to die.  I resent this game for making me play it.  I don’t know anyone named Morris, but I will befriend one just so I can hate him.  I had a couple minor issues with the logic of the game as well.  Like why do guards attack me because 3 orphans are pestering me?  I would understand if they were already looking for me, or if I just killed them like I always wanted to, but just because they see a guy being bothered by kids?  They should attack the kids!  Or let me!  As much as I loved the regular gameplay of Assassin’s Creed, this game kind of overshadowed it for me with the new nautical battles.  I really dug these.  It made me wish Ubisoft would take over a really cool Pirates of the Caribbean game.

The look of the game is fantastic, with next to no complaints.  The landscapes are beautiful, and the seafaring levels are brilliant.  The only thing I took issue with was minor, but annoying.  The game gives you the ability to change the color of Connor’s outfit, but does not have the ability to change his costume color in the cinematics.  I’ll be wearing some badass black and red getup just to suddenly, and jarringly, be wearing classic white because I’m chatting with Sam Adams now.  Come on, Ubisoft.  We all know this technology exists.

I never was all that interested in the multiplayer of the Assassin’s Creed games.  That lack of interest, as well as the structure of the multiplayer, has not changed much.  It’s an interesting idea, and it’s nice that it’s different from the typical first person shooter multiplayer, but it also doesn’t really keep my attention very long.  The first problem is that they take so long to explain it in the overlong tutorials for it.  They actually show you how to free run!  Does anyone buy Assassin’s Creed for the multiplayer?  In which case, how would they not already know how to free run, and probably have played the entire story mode before even bothering to give multiplayer a shot.  Then, when you get into the multiplayer, it’s not usually the game of hiding and surprising that the tutorials make it out to be.  It’s mostly just people running around in circles trying to stab each other.

The achievements in this game weren’t insurmountable, but there were still some that I was not going to bother with.  Namely, the multiplayer ones.  But I did get the rest of them.  The only ones that I found very annoying were the ones involving the board games and the damned Encyclopedia of the Common Man stuff.  That was extremely tedious.  You basically have to take a look at everyone in your homestead doing three different versions of their jobs.  They may choose not to do their jobs for about 4 or 5 days because they’d rather be fishing, and you may not be able to kill them in punishment for their inefficiency, but you will have to stand around waiting for them to do it anyway.

Assassin’s Creed 3 was a great game that was hindered by a few minor problems that just should not have been there from a company that makes such polished games usually.  But they were only temporary hindrances in a beautiful game with highly enjoyable gameplay and completely forgettable multiplayer.  I recommend buying this game.  I bought it for $35, which it is totally worth.  I’d still probably get it for $60 though.  Assassin’s Creed 3 gets “My enemy is a notion, not a nation” out of “Better the world burns, than SHE is unleashed upon it!”