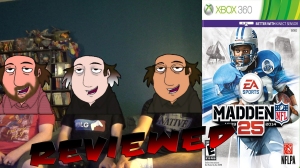 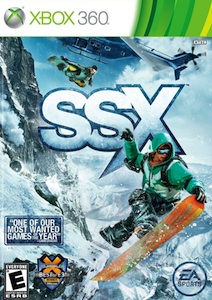 I had a game sitting in my house from Gamefly for a really long time that I just never had the inspiration to actually play.  I had been a big fan of the genre as some simple, stupid fun back at the game series’ debut, but I had fallen out of love with it over the years.  I’m not sure what made me think I would like it as much as I once had, but I had put the game on my Gamefly queue and, after it sat around for a long time, I finally decided to try the new installment of SSX, developed by EA Canada, and published by EA Sports.

You play as Zoe Payne.  She snowboards.  Also there’s a former SSX member named Griff.  He snowboards too.  You have to do it better than him in various courses.

It may seem that I don’t have very much to say about this game.  Well I guess that’s true.  I figured I wouldn’t play the game very much because it would basically just be riding a plank of wood down a hill, but I also didn’t figure that I would play the game for an hour tops and then realize that I was completely bored and needed to stop playing it entirely.  There’s literally nothing to say about the story of this game, so let’s move on.

The gameplay really had nothing to offer me.  I really don’t have much recollection of how the game handled in its earlier incarnations so I can’t say if it got better or worse or stayed the same, but either way I lost interest pretty quickly.  It’s pretty simple stuff.  You go down a hill, you jump, you pull the right stick in different directions to grab the board and use the left stick to turn and flip.  They do a pretty good job with the controls, making it so you grab the board with your first movement and do tweaks by rotating the stick from there, but you can see everything you need to in about 5 minutes.  You can also grind on trees and poles in the game, but only if you can manage to actually aim yourself properly enough to get onto one of them.  They also have wingsuits that you can use to hover between surfaces, but I was done with the game long before I figured out how to do that.  I probably made it through about six or seven levels and then I was just spent.  I had no more willpower to make it through the game.  I wouldn’t even say that the game was bad, but the fun of the game could not hold my interest for very long at a time.  The levels didn’t feel like they changed much at all, and even the game types weren’t very different from each other.  You can race, you can go for high score in tricks, or you can put on armor and try to avoid trees.  Either way you slice it, you’re basically just riding a piece of wood down a hill.

It kind of seems to me as if I was taking the easy way out of my review for SSX by not saying much about it, but there really didn’t feel like there was much to say.  There was practically no story, the game looked good, and the gameplay was fine for about a half hour, and then you just realize that it’s the same thing over and over again.  I can’t even really talk about the achievements in the game because I don’t think I even bothered to get one of them.  I could perhaps recommend this game to people that love over the top snowboarding, or if they can find it for around $10, but not really worth a sizeable investment for most people.  SSX gets “It’s Tricky!” out of “I’m bored!”