I Think We Just Found a Transformer! 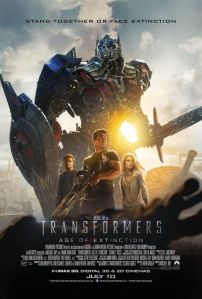 One could ask why they keep making these Transformers movies.  If one were to ask that, one would also have to ask why I never miss one.  But neither of these questions are without answers.  They keep making these movies because they make bank, and I keep watching them because they’re fun.  Really stupid fun, but fun nonetheless.  Let’s see if they can keep that streak alive as I review Transformers: Age of Extinction, written by Ehren Kruger, directed by Michael Bay, and starring Mark Wahlberg, Peter Cullen, Kelsey Grammer, Mark Ryan, Frank Welker, Nicola Peltz, Jack Reynor, John Goodman, John DiMaggio, Ken Watanabe, Sophia Myles, Li Bingbing, Titus Welliver, and T.J. Miller.

Cade Yeager (Mark Wahlberg) is a ridiculously-named struggling inventor/single parent out of Texas that comes across a beaten up old diesel truck that turns out to be the leader of the Autobots, Optimus Prime (Peter Cullen).  Having a Transformer in your midst has become quite a dangerous proposition as the head of an elite CIA unit named Harold Attinger (Kelsey Grammer) has been tasked with hunting down the remaining Decepticons, but ever the over-achiever he has decided to hunt down Autobots while he’s at it, with the help of a Transformer bounty hunter named Lockdown (Mark Ryan).  Helping Optimus escape puts Cade, his daughter Tessa (Nicola Peltz), and her boyfriend Shane (Jack Reynor) on the lam as they work with Optimus to uncover a joint effort between the CIA and a robotics corporation called KSI to build their own Transformers.

They did it again!  They made another Transformers movie that is completely stupid and poorly-written, but fun enough to make me look forward to the next stupid mess.  Let us not fool ourselves into thinking these movies are anything they’re not.  They’re so dumb, but they jingle their explosive keys in front of your face enough that you might not even notice that most of the people in the movie can barely string a sentence together.  But I noticed!  I notice when people say things like, “My face is my warrant.”  I don’t know what that’s supposed to mean, but I heard them say it, and if they’re going to continue making people say things like that, I’m going to revoke their ability to make their characters say words in their movies.  It’s not like they need them, or use them correctly for that matter.  When they’re allowed to use words, they’ll sometimes even create their own words to equally stupid effect.  Like “Transformium.”  Not since I heard a person utter the word “Unobtainium” in a movie had a word caused my nose to bleed in a movie theater.

And that’s just the dialogue!  Don’t think that the plot itself was seamless.  I mean, we can all get behind the fact that it was Transformers that brought about the end of the dinosaurs.  Except those stupid scientists that think it was an ice age or a meteor, but we all know what’s up.  One thing I didn’t understand is how Tessa’s boyfriend Shane knew that he was needed at the Yeager farm when the CIA showed up.  And if Optimus could repair himself completely by just driving by a clean diesel, then why would he be in such bad shape when Cade found him?  I can’t be on the freeway more than about a minute without seeing a diesel but Optimus couldn’t have repaired himself on his way up from Mexico?

But like I said, I don’t see these movies for the words attributed to it.  The only words that would interest me in looking through a script for this movie would be while looking through the pages to see “explodes.”  This movie won’t let you down for that.  If you’re anything like me, you’ll still get a rush out of watching Optimus Prime bust out a sword and go to town on some bad guys, and you won’t be let down watching Bumblebee throw a boat at some baddies either.  The only real problem I took with the action in the movie was with the Dinobots.  When they showed up, they were awesome, but they took so long to get to them!  They didn’t really show up until the last 20 minutes of the movie.  They were the main reason I was excited to see this movie!  I appreciate that they made good with them when they got around to them, but it was so much two and a half hours of foreplay is a little extreme.  Oh wait, I had one other problem.  It was the part where the rally car jumped out of the window of that building with the most ridiculously convenient ramp in history.  Two I-beams pointing out a window, conveniently the same distance apart as the wheels on said rally car and, the exact same distance from the window as a rally car can jump, an inexplicably created half-pipe for it to land in.

The performances were all what they needed to be in this movie, and you couldn’t really expect or need much more than what they offered.  I still resent the silliness of the name Cade Yeager.  And, as if the name Cade Yeager wasn’t silly enough, he constantly tried to prove he deserved that name with equally silly things to say.  My personal favorite was his plea to a fellow inventor played by Stanley Tucci.  He says, “I know you have a conscience because you’re an inventor, like me?”  What the hell is that supposed to mean?  Are inventors notoriously conscientious?  Sure, some inventors gave us great things like the car and internet porn, but someone also invented terrible things like the atomic bomb and Kristen Stewart.  The fact that he was an inventor didn’t really work out that well either.  The movie expects me to believe that he’s up to the task of aiding in the repair of an alien robot but all he’s ever been able to do on his own is make a robot that can shoot a basketball into a hoop and a robot that can transport a beer 4 feet in 20 minutes.  They also never really bothered to explain how an inventor (a job typically reserved for people that look like the cast of Revenge of the Nerds) turned out to be ripped like Marky Mark Wahlberg.  Nicola Peltz was kind of a twat as his teenaged daughter, but she was probably only there as the occasional eye candy.  Her boyfriend was a piece of shit too.  What kind of boyfriend would say, “I like to be fresh when I’m making out with your daughter,” to his girlfriend’s dad?  Even a dad that was not overprotective would beat your ass for that.  I had a couple problems with the Transformers as well.  I enjoy that Bumblebee typically only speaks in movie quotes, but when he says, “Hey you guys,” at one point in the movie how could you not have chosen the clip of Sloth from Goonies to say that?  Fail, movie!  I also didn’t understand the character Drift at all.  Why does the Bugatti Veyron turn into a Japanese Samurai?  I don’t know much about cars, but the name Bugatti Veyron doesn’t sound Japanese to me.

No logical individual could go into Transformers: Age of Extinction expecting much more out of it than what the movie delivers.  Fairly pointless story and terrible dialogue, but with plenty enough things exploding to make you forget how stupid the movie is because you’re having fun.  Shut off your brain and enjoy.  An active brain won’t help you enjoy this movie at all.  Transformers: Age of Extinction gets “You gotta have faith, Prime.  Maybe not in who we are, but who we can be” out of “Sweetie, get my alien gun!”