For a Few to be Immortal, Many Must Die 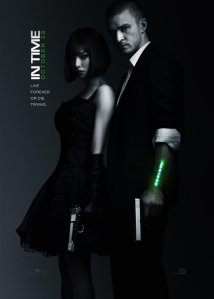 I confess that I never had any interest in watching today’s movie.  And yet, while thumbing through a RedBox, I decided to pick it up.  I’m an enigma.  The movie seemed like a fairly typical action movie that even the very attractive cast could not pique my interest in.  But it was slim pickings in the RedBox that I went to, so you take what you can get for your entertainment dollar.  But I’ve been surprised by movies before, so let’s see how this one did.  Today’s movie is In Time, written and directed by Andrew Niccol, and starring Justin Timberlake, Amanda Seyfried, Cillian Murphy, Vincent Kartheiser, Matthew Bomer, Alex Pettyfer, Olivia Wilde, and Johnny Galecki.

What a shocker!  It’s the future and it’s not looking that bright.  Well, one part of it is: everyone in the future stops aging at the age of 25.  The catch is that everyone is given one year’s worth of time, starting at that age.  The time can basically act as money.  You earn it by working, you spend it on living.  But when you run out of money, you drop dead.  We follow a 28-year-old factory worker named Will Salas (Justin Timberlake) who lives with his mother, Rachel (Olivia Wilde), and struggle to get by day by day.  All that changes when he saves the live of a guy named Henry Hamilton (Matthew Bomer), who repays Will by giving him 116 years and then “times out” (dies).  Will is really excited to give some time to his mom, but she times out as well.  Not really knowing what to do with himself, he decides to go to the rich district to gamble with his extra time.  He wins 1,100 years from businessman Philippe Weis (Vincent Kartheiser) and meets his daughter, Sylvia (Amanda Seyfried).  But Will has a problem: the police force (herein called the Timekeepers) found Hamilton’s dead body and think that Will stole the time from him.  At a party at Weis’ house, the Timekeepers show up to arrest Will, but Will escapes using Sylvia as a hostage.  With all of his time confiscated by the Timekeepers, what is Will going to do next?

Meh.  That’s what I have to say about this movie.  Meh.  The idea of the movie is interesting enough, but the execution leaves the greater majority of the movie people looking at their wrists while holding hands.  It’s not a new idea to film goers that the future is going to be a shitty place.  It’s not a new idea to anyone that rich people lead better and longer lives.  But turning the amount of time you have in this world into currency is a pretty nifty idea.  One that I hope never becomes reality, but it’s okay to watch it in a movie.  If it is something they’re looking at making a reality, I certainly hope they figure out how to transfer time between two people with something more than a handshake.  That shit will get stolen all the time.  Then the world would just be rich people and criminals.  But the movie eventually degenerates into a pretty basic chase movie, and even more often into a futuristic Robin Hood.  The message gets a little lost when Will and Sylvia are doing the right thing (kinda) by taking time from the rich and giving it to the poor, only to have the poor have their time taken and get killed for it.  The movie can’t decide if it wants us to do the right thing or not bother because it will only get people killed.  And to defeat these time thieves, Will must get into something that looks like an arm wrestling match, as if I was watching Over the Top with Sylvester Stallone.  Will also gets blamed for the death of Johnny Galecki because he gave him 10 years and Johnny decided he needed to go blow a year of that on booze and die in the gutter with 9 years left.  His wife then gets all bitchy at Will for that.  He tried to do something nice, bitch!  You’re the one that married the alcoholic!  The movie was not all boring though, and it at least looked good.  It shouldn’t be that hard when everyone in the cast has to be able to play 25.  Some Timberlake for the women, and some Seyfried and Wilde for the men.

The performances were fine enough, but nothing really spectacular behind the physical.  The movie didn’t require a lot of range out of anybody, really.  It was really weird to me to have Timberlake talking to Olivia Wilde as if she was his mother, even though they look to be in the same age range.  And the same could be said for Weis when he introduced his step-mother, wife, and daughter, who all looked roughly the same.  Nobody really had to put on that much of a performance in the movie beyond regular stuff and running a lot.  If you were pretty and able to look at your wrist, you’re in.

In Time is a decent idea that never really got very interesting.  Lots of running, lots of hand holding and clock checking, and pretty people everywhere.  But really not a whole lot more than that.  It’s not a bad movie, but it’s one you can easily do without.  If you need to see it so bad, you can find it at a RedBox, but there are better movies to spend your time with.  And so, In Time gets “Don’t waste my time” out of “I don’t have time.”