This Meeting of the Losers Club Has Officially Begun. 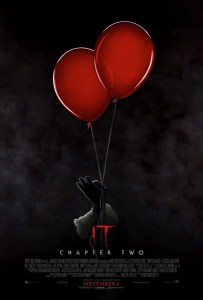 Two years later and we’re back!  And we’re not the only ones!  Although technically they waited 27, but I’m not gonna wait that long to write a review.  And it’s still October and Horrors are still thonning, and today’s movie qualifies.  This movie of course is It Chapter Two, based on a novel by Stephen King, written by Gary Dauberman, directed by Andy Muschietti, and starring Bill Skarsgard, Jessica Chastain, Sophia Lillis, James McAvoy, Jaeden Martell, Bill Hader, Finn Wolfhard, Isaiah Mustafa, Chosen Jacobs, Jay Ryan, Jeremy Ray Taylor, James Ransone, Jack Dylan Grazer, Andy Bean, and Wyatt Oleff.

27 years after the first movie, Pennywise (Skarsgard) has returned to Derry, Maine and is killing again.  And that means the Losers Club – Beverly (Chastain, Lillis), Bill (McAvoy, Martell), Richie (Hader, Wolfhard), Mike (Mustafa, Jacobs), Ben (Ryan, Taylor), Eddie (Ransone, Grazer), and Stanley (Bean, Oleff) – have a promise to keep: to return to Derry and finish what they started 27 years earlier.  But there’s a problem: most of them have been inexplicably forgetting everything about their time in Derry.  And another problem: Stan killed himself when Mike called him.  So not off to a great start…  But anyway, the rest of the Losers get together in Derry and must work together to overcome the otherworldly evil Clown.

I enjoyed It a great deal, and I also enjoyed It Two too…as well…  I suppose I would assume that I enjoyed the first one more, but this movie would be somewhat confusing without that movie first so it gets extra credit.  Also, just the idea of turning that book into 2 movies seems like such a daunting task and they pulled it off admirably, and trying to wrap everything up is also a challenge.  I had few issues as far as the story goes.  One of them was with the Native American ritual.  My first issue with it is that someone made a comment that the ritual was ridiculous.  Yeah?  It’s a ridiculous solution…for your problem with a shapeshifting ghost alien clown?  …But now that you mention it, you do have a point.  Why the hell would a Native American ritual affect an alien?  Another issue I had was with the way they beat Pennywise.  They essentially defeat him by bullying him.  They just mock him until he shrinks and then they rip his heart out.  So maybe they’re even worse than bullies.  I mean, their bully was a complete psychopath, but even he didn’t get much further than cutting the fat boy.  At least not until he came back as an adult.  The last issue I had with this movie is actually an issue with myself.  In the movie, they do a gag when someone busts through a door and does the “Here’s Johnny!” thing.  I am embarrassed to admit that I actually thought for far too long that this movie ripped off the Shining.

A lot of the visual stuff in this movie was very well executed.  Like all those fortune cookie monsters were terrible.  That’s what they were going for, so congratulations.  Also terrible was the way the Losers cut their hands to make their little pact.  All of their scars looked way too big and then when we saw it happen, it looked like they all cut far deeper than was necessary.  A little slice will do ya!  No need to get the hooked piece of glass and really dig into your hand with it like you’re trying to hit some tendons so you don’t have to use it anymore.  You’re making a promise, not trying to get discharged from the military.  Especially since most of the Losers were young boys that are going to really need those hands coming up in puberty times.  Another terrible thing was Stan’s spider transformation later on.  That could haunt the dreams of a lesser man.

My biggest problem with the cast of the movie is similar to one I had with the first movie: I can’t remember which kids are which.  In this movie, I can’t remember which kids are which and I also can’t remember which adult represented which kid.  Except for Beverly.  For some reason, I was always able to tell which one she was.  Otherwise, all the kids and adults were very good in the movie, and a lot of them really worked as adult versions of their kid counterparts.  Chastain was a fairly obvious choice to take over as Bev.  I feel like she was even dream cast in the part by most places before she was officially cast.  She did great in the role though.  I took some issues with the fact that she went back to her old house that was now occupied by an old lady and just took it upon herself to start destroying the old lady’s floorboards to find a poem, but the trailers already let me know that this old lady was Pennywise so she can get a pass on that.  I didn’t think McAvoy looked very much like his kid, but he was probably hired more for the acting.  But maybe he was just cast last minute when they realized they hadn’t cast a Bill yet.  I assume they do this sort of thing since in the movie he was the writer on a movie that they had started shooting before he had even written the ending yet.  I did wonder why Bill would fall for Pennywise’s Georgie trick as an adult though.  When he’d fall for it as a kid, it made more sense, but why are you as an adult seeing Georgie in a sewer and the same age he was 27 years earlier and you think, “Yup!  That’s gotta be the real Georgie!”  I also wanted to say that when Bill was talking to that kid on the skateboard right after that, I was expecting a Pet Semetary style clobbering by a big truck and was very disappointed when it didn’t happen.  Ransone was a pretty good adult version of Grazer, but I kept getting distracted by where I knew Grazer from until I realized he was the kid from Shazam.  Bill Hader was another one I thought was more cast for who he was than his resemblance to Finn Wolfhard, but it was okay because Hader was great.  He acted the bejesus out of his reaction to a character’s death in the end, and he was also a nice comic relief for the rest of the movie.  Also, there was a cool Stephen King cameo!  …That’s all I had to say about it…

It Chapter Two was probably technically not as good as its predecessor, but since they were both taken from one book, I would say it’s best to just put the two movies together and judge them as one, which means that It was a really fun horror movie that was way too long at like 5 and a half or 6 hours altogether.  The story was good, the visuals were great, it was scary-ish I suppose, and it was cast very well.  You probably already have, but if you haven’t, I recommend you go watch it.  And by it, I mean It.  It Chapter Two gets “For 27 years, I dreamt of you. I craved you… I’ve missed you” out of “I guess you could say that was long overdue.  …Get it?  ‘Cause we’re in a library?”