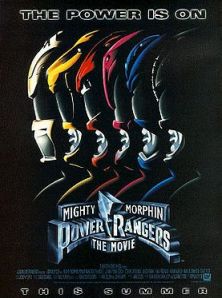 We are about to embark on a movie review that I am quasi-embarrassed about owning, but I feel I had no choice. My childhood demanded it’s purchase. That movie is the very first movie port of the television classic … The Mighty Morphin Power Rangers – The Movie. Oh yeah, this is happening. MMPR includes the star studded cast of Jason David Frank, Amy Jo Johnson, David Yost, Steve Cardenas, Johnny Yong Bosch, Karan Ashley, and other people I don’t know.

The Power Rangers, as many of you possibly remember, are a group of 6 30+ year old teenagers that are given incredible powers – to change their clothes in a blinding flash of light – by the creepy floating head Zordon (Nicholas Bell) and his bumbling, annoying, robot assistant Alpha 5 (voiced by Richard Wood). Those 6 teens are played by Jason David Frank (The White Ranger, Tommy Oliver), Amy Jo Johnson (The Pink Ranger, Kimberly Hart), David Yost (The Blue Ranger, Billy Cranston), Steve Cardenas (The Red Ranger, Rocky DeSantos), Johnny Yong Bosch (The Black Ranger, Adam Park), and Karan Ashley (The Yellow Ranger, Aisha Campbell). For some reason, there is an excavation taking place in the middle of the city of Angel Grove, and that excavation turns up a purple egg. The enemies from the TV show, Rita Repulsa (Julia Cortez with the voice of Barbara Goodson and wearer of a Madonna bra) and Lord Zedd (voiced by Robert Axelrod, and has no skin and an exposed brain), turn up and crack the egg, revealing the purple ooze from Ghostbusters 2, that then morphs into new villain Ivan Ooze (Paul Freeman). The Power Rangers show up and Ivan creates some ooze minions for them to battle before fucking off to go destroy Zordon. As is customary for the Power Rangers, they decide they need to try their hand at fighting them as regular people first before eventually reaching a stalemate and having to morph into their Power Ranger forms (which is basically just changing clothes), and then they win. Ivan destroys Zordon and the Power Ranger home base, which causes the Power Rangers to loose their powers/outfits. They go back and find out that Zordon will die if they don’t go to the planet Phaedos and get some new powers to save the day. Ivan Ooze enslaves the parents of Angel Grove, builds big robots, Rangers find their powers, come back, win, fireworks. The end.

A lesser man would be embarrassed to admit this, but my nostalgia kind of took over and made me actually kind of like this movie despite the cheesiness. I’m sure it’s almost entirely the nostalgia too. The group of Rangers is second generation, only Jason, Amy, and David still here from the original cast. The only thing that stands out in this movie as actually pretty good is the fight scenes. They’re actually not that bad. The guys all seem as if they’ve had some sort of martial arts training and make it look pretty good. The women, on the other hand, seem as if they got in on their good looks and gymnastics ability. The women remind me of back when I used to watch the WWF/WWE. The women were all ranged from pretty good to look at to downright hot, but when they started wrestling it degenerated to hair pulling or really poor wrestling. Except for Chyna, but she was basically a dude.

The story of the movie is basically a 4 part TV show jammed into 1 movie and serves it’s purpose of ganking some extra money from the kids that watch on TV and the parents forced to accompany them. The lines they spit out were either really bad or really cheesy bad. Also, unexpectedly, some things don’t make sense in this movie. The main one is the fact that all the Rangers wear the color of their ranger all the time. I don’t know if they decided they needed to only have this one color in their palate before becoming Rangers or after, but I feel like, if I lived in Angel Grove, I’d take a look at the group of kids that had the exact same number in their group as the Rangers and wore around the same color as the Rangers and say to myself, “There is a 27% chance those guys are the Power Rangers.” When the Rangers go to Phaedos and meet the hot chick with the bo staff, they get introduced to their inner animal powers and they get ninja costumes (that only last until they get the power they came their for, for some reason). White gets the Falcon, Red gets the Ape, Yellow gets the Bear, Blue gets the Wolf, Pink gets the Crane, and Black gets … the Frog. One of these things is not like the others. Did you guys run out of badass animals to use? Even the crane is a martial arts form. I’ve only seen “Frog Style” in Kung Fu Hustle. Why not a Panther? They’re already black! I think I would want to be the Chartreuse three-toed sloth. That way I could connect with my animal powers by laying around and letting the other dudes do the fighting. Also, the girl with the staff tells them she can’t go help them acquire the power because “if she leaves the plateau, she’ll begin to age rapidly”. Isn’t that just like a girl to not want to help out an entire world and her friends so she can keep her smokin’ bod?

I could talk about the acting in this movie, but why bother? You know it wasn’t great. Why would you expect it to be otherwise? Instead, I’m gonna make fun of the things they do. The biggest one I always loved back in the day was the fact that, when they’re Power Rangers and wearing the big, plastic helmets, they have to move their whole heads to indicate they’re talking. Also, these people cannot just walk when they’re Power Rangers. They have lost that ability. Instead they choose to backflip EVERYWHERE. Also, do they REALLY need to loudly proclaim the name of the item they’re going to use? Like the Pink Ranger has to yell “Pterodactyl Whip Thingie!” before the thing works. I don’t think anything works that way in real life. THREE-TOED SLOTH SPACE BAR, ACTIVATE! Also, the reason I watched this movie is because one of my friends, Mikey G, was having an argument about when and if Tommy and Kimberly ever got buck nasty. Well I researched and found out they did, but it was in the TV show at some point. In this movie, they only indicate that they’re starting to get up in each other’s jocks.

One more quick thing before I leave you. I guess, since they now had a movie budget, they decided to change a few things up and make them fancier. They changed the costumes a little bit. No longer were they to wear colored spandex. Now they wear colored motorcycle outfits. They also made the awful decision to change up the presentation of their giant robotic “Zords”. In the TV show, the MegaZord (the combination of all of the Zords into one Voltron rip off) was a Godzilla-style guy in a costume fighting in a tiny scale city and destroying things indiscriminately. This time they went with CGI, but did not realize how much worse it looked than the guy in a costume. CGI for this movie, either being from CGI having not developed far enough yet or their low budget, was terrible. Also, with the change of a couple of Rangers, this movie killed my joke about how racist they were. In the original cast, the Yellow Ranger was the Asian and the Black Ranger was the African American. Now the Yellow Ranger is a black girl and I assume one of the other new dudes is Asian. Total bummer.

Even though I said all those things negative about this movie, I still think you should watch it. I didn’t find it unbearable. If you watched the Rangers as a kid, you might get a little enjoyment from talking the walk down memory lane. If you didn’t like the Rangers, you can still watch a watchable bad movie and make fun of it. I give this movie “We may not have our power, but we’re still Power Rangers!” out of “Ayeyiyiyiyi!”