How Much Abuse Can One Man Take? 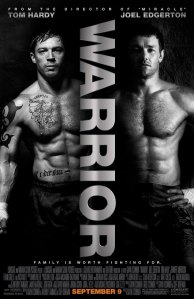 I felt like it was necessary to put off today’s review for as long as possible after the Rocky reviews went up.  This is a movie I’ve been thinking about seeing for a long time, but never really gotten around to it.  And it’s also a movie about underdog fighters trying to do something big.  That being the case, six Rocky movies were enough in one span of time.  I was able to mix it up for the two reviews that separated this movie from Rocky with a romantic comedy and a really old movie, but I’ve had the disk sitting here from RedBox for a couple of days already and didn’t want to keep getting charged for it, so today is the day for my review of Warrior, written by Anthony Tambakis, directed by Gavin O’Connor, and starring Joel Edgerton, Tom Hardy, Nick Nolte, Jennifer Morrison, Vanessa Martinez, Frank Grillo, Kevin Dunn, Bryan Callen, Kurt Angle, Erik Apple, Nate Marquardt, and Anthony Johnson.

AWOL US Marine Tommy Conlon (Tom Hardy), though he tends to go by Tommy Riordan, returns home to visit his father, Paddy (Nick Nolte), to get him to train him for a winner-takes-all mixed martial arts tournament called Sparta, the winner of which takes home 5 million dollars.  Tommy wants this money to provide for the family of a friend of his that died in the Marine Corps.  Paddy’s older son, Brendan Conlon (Joel Edgerton), works as a physics teacher but, because of money troubles, he does small time fights on the side.  A bruise on his face gets him suspended from teaching, which is certainly not helping his money troubles.  Though his wife Tess (Jennifer Morrison) is against it, Brendan starts training to participate in Sparta so that the prize money can help him keep his house.

This movie is the Rocky for this generation, or at least it should be.  And hopefully that doesn’t mean they’ll dilute it with too many sequels of questionable quality.  This is a movie that women may avoid as they seem to do with Rocky, but that’s probably because they are making a very incorrect assumption about what this movie is.  Yes, it’s got MMA in it, but the real story is about a broken family somehow repairing itself through punches to the face.  Let’s focus first on the story that should be the reason you watch this.  Tommy’s side of the story is all about slowly unraveling his troubled past and how he deserted the Marines, saved the lives of a bunch of other marines, and the troubles he had with his family.  Brendan was dealing with his financial troubles, his career problems, his disapproving wife, and his family troubles.  Paddy is tying together the two sons who hate his guts.  It’s so well-written and so emotional.  The climax is so satisfying and emotional that I actually got a little choked up for it.  I would say that the beginning of the story is a little drawn out and doesn’t have a lot happening so that could’ve been shaved down a bit to benefit the story.  And I probably would’ve liked to have a little something more after the ending to wrap everything up with Tommy’s desertion problems, but it was still really good.  This is an MMA movie though, and the fights are pretty spectacular.  The first thing I appreciate about this is that I think boxing has lost a lot of its steam since the Rocky days.  I’ve never been that big of a fan of boxing, but I am all about MMA, and this movie does not disappoint.  Though it’s often to a lesser extent, MMA can suffer the same problems as boxing when the fights are moving too slow because the fighters aren’t willing to advance.  In a movie, you don’t have to worry about that.  All of the fights in this movie were intense and exciting.  One of the very first matches was Tommy absolutely embarrassing an experienced but douchey fighter.  He whoops that ass!  Tommy’s style was mostly wrestling and striking, and he won all of his fights with ease and brutality.  Brendan took more of a beating, but always won with some great submission moves.  I really liked his fight with Kurt Angle because Kurt was playing a Russian named Koba who was a force to be reckoned with, and it reminded me of the Rocky vs. Drago fight from Rocky IV.  One problem I had (without spoiling anything) was that there is no way a match would be allowed to continue when one of the fighters has a noticeably dislocated shoulder.  They would’ve stopped that shit and called the other guy the winner.

All of the performances in this movie were superb.  Joel Edgerton gave a very real and grounded performance.  It annoyed me that so many people doubted him because they thought of him only as a physics teacher and ignored the fact that he used to be in the UFC.  But in a world where the UFC actually exists, why are these guys not aware of Rich Franklin?  He used to be a teacher!  Tom Hardy’s performance was not openly emotional, but you could see that he was semi-constantly dealing with some inner turmoil.  And his fights were the most awesome for me to watch, though I do like a good submissions game.  I will say as well that I thought I couldn’t be more excited to see Dark Knight Rises, but now that I’ve seen this guy in this movie, I’m even more excited to see what he does with Bane.  Nick Nolte was fantastic in this movie.  He knew that he had fucked up royally in the past, but had gotten sober and wanted nothing more than for his sons to forgive him.  You feel really bad for him for the bulk of the movie.  If I had to say there was a bad performance in this movie, it would definitely be those douche ass announcers at the Sparta tournament.  When they were first fighting, the announcers said that both of the brothers were going to lose.  After they won, they warmed up to Tommy and kept saying Brendan was going to lose.  Maybe you two should just shut the hell up.  You’re no Miss Cleo.

I had a feeling I would like Warrior when I was going into it, but I didn’t really know that I would love it.  It’s the Rocky of this generation!  A fantastic and exciting fight story, but with a very good emotional storyline that should make even people that don’t like MMA love this movie.  I definitely recommend this movie, and with no caveats.  Everyone should love this movie.  You can probably still find it from a RedBox if you’re unsure, but I will probably be purchasing it post haste.  Warrior gets “I think I liked you better when you were a drunk” out of “C’mon, it’s not as bad as it looks.”