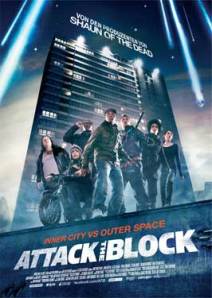 Alright, now I’ll give you my first post-Horror-thon review of a good movie. This is a movie I had first heard about from Simon Pegg talking about it on Doug Benson’s podcast, even though neither of them were in the movie. It was because Nick Frost, the other part of the duo from Hot Fuzz and Shaun of the Dead, was in this movie. But it’s also a pretty damn good movie. So let’s get into this, shall we? Attack the Block was written and directed by Joe Cornish, and it stars John Boyega, Jodie Whittaker, Alex Esmail, Franz Drameh, Leeon Jones, Howard Simon, Luke Treadaway, Jurmayn Hunter, and Nick Frost.

Sam (Jodie Whittaker) is a nurse returning home one day when she is robbed by a gang of hooligans, comprised of the leader Moses (John Boyega), Pest (Alex Esmail), Dennis (Franz Drameh), Jerome (Leeon Jones), and Biggz (Simon Howard). Shortly afterwards something falls from the sky and smashes into a car. The hooligans go to investigate and find out that the object was a small creature that proceeds to slash Moses in the face as he tries to steal the stereo and then runs off. Moses is unhappy about his new, awesome scars (though I would thank the creature for making me a badass) so the gang hunt the creature down and beat it to death. They take the creature to drug dealer, Ron (Nick Frost), who introduces them to his boss, Hi-Hatz (Jumayn Hunter). Moses asks to keep the creature in Ron’s fortified weed room until they can find a way to sell it. Turns out this little creature was the female that is now releasing a pheromone that will attract the males of her species. The males are much larger and look like big gorillas covered in pitch black hair that is pierced only by their glowing blue fangs. These creatures are not friendly. And, to make matters worse, seem to be infatuated with the gang of hoodlums. The gang must try to overcome this new threat that is attacking their block.

I found this movie to be a very enjoyable experience. I wouldn’t say it’s up to the quality of Shaun of the Dead by a long shot, so it’s unfortunate that they put that on the poster, but it’s still really good and definitely worth watching. The basic premise is certainly nothing new: the story of aliens coming to Earth and making us fight them off. Even the story of the under-equipped or kids from the wrong side of the track fighting off a threat is not entirely new, but that doesn’t mean it can’t be good. I liked the story, I liked the dialogue, I liked the message, and I especially liked the British slang. British is an adorable accent to listen to, and their slang – though sometimes hard to interpret – is fun. They had a lot of nerd jokes in the movie, which I loved, of course. They mentioned Naruto, Ghostbusters, and Pokemon at different parts in the movie, so that works for me. You do gotta catch ’em all. I did wonder about the intelligence of them hoodlums though. They seemed very surprised when they met up with the lady they robbed later in the movie and she said she was going to move. Why would a single woman living alone decide to move after being robbed by a pack of thugs that live in her building? The message of the movie is pretty good. Though they go the scientific way to it, it’s basically about Karma. The giant monkey creatures were after the thugs because Moses was covered in the pheromone from the female. But this also meant that their random acts of violence was what caused the aliens to hunt them down. Not only was this a good message, it wasn’t like it was just fate that was doing it, there was also a logical reason for it to be happening. It also had a message of potential redemption as Moses was prepared to sacrifice himself to save Sam and his remaining friends to pay for the choices he made. When arrested for it at the end, the crowd’s chanting gets him released.

The look of this movie was very good. The thing I noticed the most and liked the best was the aliens. I believe this movie had a fairly small budget, but their aliens were very convincing, very alien, and very well done. It seemed like most of them were a guy in a suit, and like I said it greatly resembled a gorilla, but it was very creepy that it had no eyes and most of the time all you could see was the glowing fangs. They tended to move like gorillas, walking with most of their weight on their front hands, but also exuded power and viciousness that made it easy to understand why these hoodlums were running away from them. The rest of the movie looked fine as well, though it was mainly just whatever area of England they were running around in. The whole movie seemed to happen in one night so it was always dark and lit by street lights so there wasn’t much beauty to behold in the area, but the movie was still filmed well. All of the explosions and violence were also very well executed.

I hate to keep repeating myself, but I have no real complaints about the performances either. I liked pretty much everybody. I went in to the movie thinking it was a Nick Frost joint, but he actually had a fairly small part in this movie. That would be the closest thing to a complaint I had beyond the slang being a little difficult to interpret, but nowhere near as bad as A Clockwork Orange. I did find their incredulity a little annoying. I don’t know what’s up with these kinds of movies, but no one ever believes what people are telling them. I feel like I’m closer to gullible, so if someone would tell me about ghosts and aliens, I’d be skeptical but totally ready to get on board. And the girl even briefly saw the creatures but kept calling them dogs until she got a good look at them. How many dogs do you know that are as big as a gorilla with shiny blue teeth and perfectly jet black hair? I know a dog that’s black, and I’ve tried feeding my dog everything but she’s never gotten glowing teeth from it.

This movie is definitely worth checking out. I picked it up from RedBox, personally, so you can definitely go at it that way and get to watch it on the cheap. But if I see the movie on BluRay when I’ve had a little more distance from the movie, I’d definitely pick it up for my collection. I probably wouldn’t get it right now because I just watched it, but I’m sure I’ll like to see it again in the future and take a look at the behind the scenes stuff as well. I’ll give this movie “Hurry up guys, we gotta catch ’em all” out of “Calm down Biggz, this ain’t Pokemon!”