The (Hopefully Temporarily) Best Game on the X-Box One! 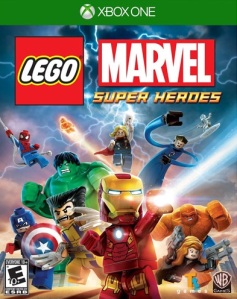 I’ve had my Xbone for a few months now and thus far I’ve been fairly disappointed with what it has to offer.  Not as a system itself; that has been fantastic.  What disappoints me is the lineup available for my next gen system.  I’ve played a few games on the system already and have found the results typically mediocre.  The game I’m reviewing today has been available since the system’s launch, but I’ve never felt it was quite worth its price.  That was until my friend Bob, the Mayor of Krunkytown, told me that I needed it.  Well, you don’t argue with a mayor and so I went out and purchased Lego Marvel Super Heroes, developed by TT Games, published by Warner Bros. Interactive Entertainment, and starring the voices of Stan Lee, John DiMaggio, James Arnold Taylor, Clark Gregg, John Eric Bentley, Dee Bradley Baker, Roger Craig Smith, Troy Baker, Fred Tatasciore, Nolan North, Laura Bailey, Kari Wahlgren, Travis Willingham, and Phil LaMarr.

It would probably be too hard to go too in depth with the story of this game.  Not because it’s particularly complicated, but because I would have to list too many damned names.  The quick break down is that a bunch of supervillains are getting together to steal cosmic bricks in order to build the “Doom Ray of Doom” to defeat Galactus (John DiMaggio) the World Devourer in hopes that it will make the people of Earth fall in line and worship their saviors.  Little do they know that they are being played by the Asgardian God of Mischief Loki (Troy Baker), who intends to harness the power of Galactus to destroy Earth and Asgard.  But Marvel comics doesn’t just make villains, do they?  HELL NO!  AVENGERS ASSEMBLE!!  …And a lot of other heroes too!

This is hands down the best game available on the Xbone.  That title is made much easier to achieve by having only 20 other titles to compete with, but that does not take much away from the acclaim.  I’ve always been fond of the Lego series.  I’ve never connected with them too drastically, but they’re typically cute and fun and they just keep getting better.  Some of their properties that they’ve made into Lego versions haven’t interested me too much, but this is Marvel.  Of course I’m in!  And it’s the best Lego game I’ve played.  The story is nothing too spectacular.  It’s basically just a “heroes save the world” deal.  Actually, it’s pretty much the story of Fantastic Four: Rise of the Silver Surfer.  That’s really all it needs to be though.  What I appreciated about it is the funny little moments they can install into the story.  I still think I liked them better when they couldn’t talk because they were pretty good at adding comedy without it.  But they’re not too shabby with dialogue either.  Having Hulk yell, “HULK SMASH UGLY SIDEBURNS!” when he meets Wolverine is pretty funny.  They also used Nick Fury in some hilarious ways.  Though he had nothing to do with the game, the character of Nick Fury is typically played by Samuel L. Jackson, and Traveller’s Tales used that for some comedy that would be well over the heads of the children that might typically play their games, making some nice references to Pulp Fiction and Snakes on a Plane.

One of the things I appreciated the most about this game was the fan service.  They referenced everything they could think to reference from the Marvel universe, and more specifically the Marvel movies.  There was a part where the Hulk punches the Green Goblin as he punched Thor in the Avengers, Thor arrives into the game like he does in Thor: The Dark World and even in a similar setting, the Put Up Your Dukes level is right out of X-Men Origins: Wolverine, one of the times you rescue Stan Lee is a reference to when he drank the infected juice in the Hulk movie, the chess set where we find Stan at one point might be a subtle reference to his cameo in the Avengers, and the game even has a mid-credit sequence like the greater majority of comic book movies.  Also, there are achievements for doing the Fastball Special (throwing Wolverine at an enemy as Colossus) and for having Captain America and Human Torch on the same team (because both are played by Chris Evans in the movies).

Now, all of those references could not have been recognized if it were not for some extreme levels of nerdiness.  That nerdiness also caused a few problems with this game.  At one point, Gambit stops the Juggernaut dead in his tracks by dropping a chandelier on him.  As big of a fan of Gambit as I am, that just doesn’t happen.  Once the Juggernaut starts moving, nothing can stop him!  He’s the Juggernaut, bitch!  Also, why is the X-Men airplane called the X-Jet now?  Is it not still the Blackbird?  And since when is the X-Mansion on the island of Manhattan?!  I also had a lot of problems arise from what the characters were able to do.  First of all, Spider-Man has genius-level intellect.  Why do I have to switch to that lame ass Mister Fantastic in order to use a control panel?  And while we’re on the subject: I know you probably felt the need to make Mister Fantastic seem useful, but since when can he turn himself into complex machines like an electric screwdriver?  That doesn’t even make sense!  …The rest of the game is perfectly logical to me though…  I also thought Mystique should’ve been more useful.  She can basically just sneak past things.  Shouldn’t she at least be able to turn into people with claws to use the claw switches?  She turned into Wolverine and had claws in the first X-Men movie!  I also didn’t like that Jean Grey didn’t have the special senses to detect switches like Spider-Man and Wolverine.  How does that make sense?  She has EXTRA Sensory Perception!  That’s like two more sensories!  And even worse, how can she take fire damage when you pick the version of Jean Grey that’s the Phoenix?  She flew into the Sun as the Phoenix!  And how does Iron Man get frozen?!  He fixed that icing problem in Iron Man 1!  And how does Magneto not fly?!  I AM THE KING OF NERDS!!

Admittedly, the look of the game doesn’t quite live up to next gen expectations.  It looks about as good as recent Lego games have on current/previous gen consoles.  It’s the look they’re going for and I don’t really knock it for that.  It’s kind of for kids, so it’s supposed to have a really colorful and not necessarily photorealistic look.  Also, it’s a Lego game.  How do you go photorealistic with that?  And this one is different from any others I’ve played because they let you play around in a sandbox Manhattan between story missions, and that is just fine by me.  I got to jet through the streets as Iron Man and the Silver Surfer!  Although I was a little bit bothered that the Silver Surfer’s flying sounded a little like a vacuum cleaner.  Is he the Silver Maid or something?  I thought all maids were brown!  BOOM!

The game is really fun and kept me interested right up to the point where I got 100% on the achievements.  I can’t really keep wasting time on a game when I’m not getting no chievos no more!  There were a couple of minor problems with the game.  Sometimes the camera didn’t want to play along, or more accurately to let you see what you were playing.  I also had a common problem where my character would choose to target my ally relentlessly when I was surrounded by enemies.  I also got irritated in the first level because they kept putting up reminders when I was the Hulk that I could hold Y to turn back into Bruce Banner.  Why would I ever want to do that?  You realize that I’m currently the Hulk, right?

Lego Marvel Super Heroes is currently my favorite Xbone game by leaps and bounds.  It’s not hard to do when everything else on the system turned out to be okay at best, but the game is still entirely enjoyable.  The story is simple but peppered with some enjoyable humor, the game looks good though not quite next gen quality yet, and it’s lots of fun to play.  I got hours of enjoyment out of this game and lost track of most of those hours after I started playing and realized shortly after that it was 4 in the morning.  And it’s an easy 1000 achievements for you achievement whores like me.  Don’t try to act like you’re too adult to enjoy this game!  It’s fun for the whole family!  Lego Marvel Super Heroes gets “Excelsior!” out of “I’m still hungry!  I need something to eat!”