Trust Me, Baby, You’re Gonna Wish You Had Three Hands. 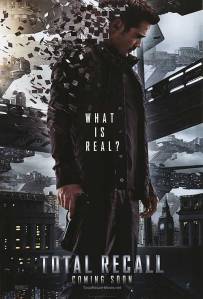 Remakes get a really bad rap. But, most of the time, they deserve them. Remakes are usually a sign that Hollywood has run out of ideas and must dig into movies that have already been made instead of supporting a new idea. It typically gets even worse when the movie that’s being remade is a movie that’s generally agreed upon as a movie that does not require a remake. If we already have that movie and it was good, you’re probably not going to add anything to it. All of that lead to me not really having a great desire to watch today’s movie. But when my end of the year review was approaching, my standards lowered and I decided to watch the remake of Total Recall, loosely based on the short story “We Can Remember It for You Wholesale” by Philip K. Dick, written for the screen by Kurt Wimmer and Mark Bomback, directed by Len Wiseman, and starring Colin Farrell, Kate Beckinsale, Jessica Biel, Bryan Cranston, Bill Nighy, Bokeem Woodbine, John Cho, Ethan Hawke, and Kaitlyn Leeb.

In the near future, war has devastated the Earth … because no movie can let us think that we have anything to look forward to. The world has mostly mellowed out, but a group of resistance fighters still occasionally cause trouble for the Man. A factory worker named Douglas Quaid (Colin Farrell) decides to visit a place called Rekall to get some artificial memories implanted to add some excitement to his life, even though his bangin’ hot wife Lori (Kate Beckinsale) and straight-jackin’ best friend Harry (Bokeem Woodbine) warn him against it. The Rekall employee, Bob McClane (John Cho), suggests that Quaid try out their secret agent package, but also warns him that past memory augmentations could create problems. Suddenly, Bob gets agitated by something on the computer and pulls a gun on Quaid, but is killed by a SWAT team that arrive and attempt to arrest Quaid, who proceeds to beat the snot out of all of them with skills he didn’t realize he had. Confused, he goes home to his wife, who perplexes him further by going all Death Dealer and trying to kill him. He eventually gets rescued by Melina (Jessica Biel), who tells Quaid that he is a spy working with the Resistance. Is this all a fake memory?! IS IT?!?!?!? ANSWER ME!!!!!

Some people gave this movie a hard time because they have such fondness for the original that they could not stomach the notion of it being remade. The difference between those people and me is that I have no particular fondness for the original. I saw the movie much later in life than most people did, and found it entertaining enough, but dated and extremely goofy in parts. That didn’t stop me from finding the irony in the fact that the studio behind this movie was called “Original Film” though. I mean, that’s balls! To call yourself “Original Film” and put out a movie that is a remake of a movie that was itself based on a book is pretty amusing to me. But, once I got into the movie, I actually found that I liked it more than I liked the original movie. It wasn’t terribly goofy and the action and visuals had drastically improved from the original. The opening perplexed me a little bit because it pretty much gave away the fact that Quaid worked for the Resistance, and only thinly veiled that by writing it off as a dream sequence, but when I got to thinking about it I realized that they were probably well aware of the fact that the people seeing this movie had probably already seen the other movie and that trying to act like it was a surprise would’ve just been a waste of time. But from that point on I was on board with the story pretty much all the way through. Sure, it wasn’t drastically different from the original movie, but who cares. It was a fun movie. I did get a little perturbed by the scene with Harry, where he’s trying to convince Quaid to shoot Melina because he was trying to convince him that he was trapped in the Rekall machine and couldn’t get out without shooting her. I feel like that moment would’ve been really easy for me. Just shoot the guy! If you kill him, then he was lying and was working for the enemy. If you don’t kill him because he wasn’t real, then he wasn’t real and who gives a shit? And let that be a warning to all of my friends: if you try to convince me I’m in a dream world, my first response will be to try to kill you.

The look of this movie took drastic steps in the right direction. The future world was very well-realized. They didn’t go horribly over the top with the future technology, but they also didn’t just set it in today’s world and say it was the future. I particularly liked the LCD Phone he had in his hand that he could touch to glass to display pictures. Take that, Samsung Galaxy Note 2! Acting all big and bad and shit! (This review is sponsored by the LG Optimus G. “If you want a phone, go with the O.G.”) One of the pieces of technology in this movie was the money they used in the future, the Obamoney. …Cute… The action in the movie was mostly over-the-top, but definitely fun to watch, even though the camera could go a little crazy in some of the scenes. I probably could’ve done without a lot of the music in the movie. I assume what I was hearing a few times in this movie would be considered “dub step,” but I really have no way to be sure. I’ve been graced enough in life to have little to no experience with dub step beyond hearing people make fun of it.

I really didn’t have a lot to say about the performances in this movie. Literally. The only note I took in the performances department was: “Bokeem Woodbine. ‘STRAIGHT JACKIN’!” And even that is just a joke meant strictly to amuse my friend Phil and me. Not that anyone in this movie did a bad job; it’s just that I didn’t have anything to say about any of them. …Any of them save for one. The crowning achievement in this movie was the performance by Kaitlyn Leeb who played the Three-Breasted Woman. YAY! THEY GAVE US THE THREE-BOOBED CHICK! That’s almost entirely all I remember about the original movie!

It’s probably not a popular opinion to admit that I enjoyed this movie more than I enjoyed the original Total Recall. The story was roughly the same but thankfully much less goofy than the original, and the visuals and the action were far better. And the performances included Bokeem Woodbine and a chick with three boobs, so I’m down with them as well. I don’t know if I’d feel the need to buy the movie, but it’s definitely worth checking out as a rental. Total Recall gets “The past is just a mental construct” out of “And by the way, you haven’t even begun to see me try to kill you!”