You Can’t See the Eyes of the Demon, Until Him Come Callin’. 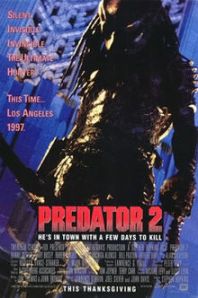 The awesomeness of Predator was bound to lead to at least one sequel.  It was inevitable.  And, as with most sequels, it was probably going to suck.  I’m positive that I’ve seen today’s movie before today, but I wouldn’t have been able to prove that from the DVD that I pulled from my DVD collection as it was still in its original packaging.  That’s not necessarily a damnation, but it’s certainly not a good sign that I would buy a movie and have no care to open it.  It’s actually somewhat typical for me because my OCD-like need to have complete series makes me want to buy all of the movies in a series, regardless of quality.  But, since I literally have no memory of this movie whatsoever, I can’t say for sure.  Until now, as I present my review of Predator 2, written by Jim and John Thomas, directed by Stephen Hopkins, and starring Danny Glover, Kevin Peter Hall, Ruben Blades, Maria Conchita Alonso, Bill Paxton, Gary Busey, Adam Baldwin, Robert Davi, Kent McCord, Morton Downey Jr., and Calvin Lockhart.

Los Angeles, in the near future of 1997, suffers from both a heat wave and a crime wave, as gangs rule the streets.  So, basically, their prediction of Los Angeles was right on the money.  The Columbians are winning a shootout with the police until a cop that plays by his own rules, Lieutenant Michael Harrigan (Danny Glover), shows up and pushes them back into a nearby building, where they are all subsequently slaughtered by an invisible and powerful threat (Kevin Peter Hall).  In the following days, this invisible predator takes out large groups of gang members, stringing them up and skinning them, and occasionally taking their skulls as trophies.  Every time Harrigan closes in on the creature, his progress is halted by Special Agent Peter Keyes (Gary Busey), who lays some jurisdiction on him to keep him at bay.  But that sounds like a rule, and Harrigan has his own set of those that he chooses to play by.  Especially when members of Harrigan’s team start falling victim to this invisible predator.

The biggest failing of this movie is its imagination.  It doesn’t have one.  It takes a creature that was fantastic in its originality and imagination and plops it down on the set of every other movie ever.  The only way you would be surprised by the things in this movie would be if this was the first movie you ever saw, and your parents would have a lot of explaining to do if this was what they chose to show you as your first movie.  I could name about 100 movies that starred the cop that played by his own rules, but got results.  And I would only stop at 100 because I got bored and depressed by the lack of creativity in cinema.  How about a cop that’s being held back by the Special Agent that has jurisdiction?  Well no one’s ever seen that before, but there’s no way he’s going to play by his own rules.  WHAT THE WHAT?!  He’s doin’ it!  Are you fuckin’ seeing this, man?!  What about this tough chick cop over here?  I doubt she’d ever grab a guy’s balls and squeeze to teach him a lesson.  Think of the sexual harassment lawsuits!  At a certain point, I started to just pay attention to the cliché’s that they kept going for and not paying to the story that was unimpressive on its own.  It’s not fun and it’s not interesting.  I think the biggest problem I have at a certain point is that I want the Predator to be the good guy.  The Predator’s awesome!  And, for the greater majority of the movie, he’s just killing gang members.  And I can’t even knock him that much for wanting to hunt humans.  I don’t particularly have anything against humans hunting animals, but I find it a lot more admirable when a man takes on a creature that actually has a chance at killing him.  Anyone could hunt bunny rabbits, but what about a lion?  Same thing.  You can’t judge the guy for wanting to hunt humans any more than you could judge a human for wanting to hunt animals.  This desire for the Predator to be a good guy made parts of the movie annoying, like when Detective Archuleta started falling through the roof and the Predator grabbed his ankle.  This mother fucker starts pulling his gun on the creature that just saved his life.  You deserved to die.  The Predator was about to kill a woman at one point until he let her live because she was pregnant.  See?!  He’s a good dude!  Stop trying to kill him and he’ll probably do right by you.  If you pick up his spear and use it to shove him off the roof with the broad side of it, he’ll throw down with you.  Also, were you aware that there was a pointy side to that spear?  The movie only had a happy ending because of the benevolence of the Predator species.  Glover would have been dead at the end of the movie if they weren’t.  On the other hand, he also decided to sample a little kid offering him candy so that he could later say it as the most random non-sequitur ever in the middle of a gunfight.  In the first movie, he sampled the Indian dude’s creepy laugh and used it at a very appropriate moment.  Offering candy to someone that’s shooting at him is just dumb.

Most of the look of the movie still holds up.  The infrared visuals take a step up so that they’re not as difficult to comprehend as they were in the first.  The Predator still looks awesome, regardless of his confusing dreadlocks.  They work for him, alright.  I’m not quite sure why they didn’t go for the obvious joke when the Predator was fighting the Jamaican gang with similar haircuts though.  They went for every other obvious thing.  It’s also nice that he has some new toys in his arsenal.  It never made that much sense that the supreme hunter has only 3 weapons in his arsenal: the wrist blades, the shoulder-mounted gun, and the self-destruct.  Now he has some projectiles, a spear, and a Frisbee of Death.  And the self-surgery he did in this movie was much more convincing.  There’s one point in the movie where we get to see the inside of the Predator’s ship and it got me wondering.  Did they already have plans to pit the Predators against the Aliens when this movie was made, or was it just a random kick to the balls that the Predator had a Xenomorph skull in his ship?

I can’t actually say I liked any of the performances in this movie.  Danny Glover annoyed the least, but all he really did was run around, sweat, and swear.  And, if I might say so, he’s probably getting too old for that.  Every other performance either failed to impress or was just bad.  Lines are delivered in a stilted and unrealistic fashion quite often.  I was also happy to realize that Bill Paxton has realized that he doesn’t have to be over the top manic in his performances anymore, as he was in this movie and Aliens.  He’s been a lot more mellow recently.

Predator 2 is not a good movie, but it’s fairly typical for a sequel in that regard.  I still like the character of the Predator, but everything else in this movie was piecemeal from every other cliché action movie.  Visually it was an improvement, but it failed in every other department.  And when you’re getting out-acted by Arnold Schwarzenegger, that’s a problem.  I wouldn’t call this worth a watch.  Just watch Predator twice instead.  Predator 2 gets “Shit happens” out of “I don’t think he gives a shit!”