I Want My Pink Shirt Back! 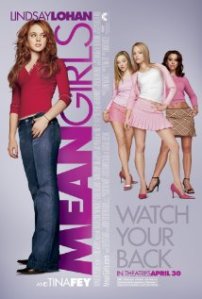 Yimmy is such a sweetheart.  He has, thus far, been the only person to consistently recommend movies that are actually good.  I have seen today’s movie before, and have heard good things about the movie from pretty much everybody, but I strangely don’t remember thinking that much of it.  It’s weird.  The writer is one of my favorite writers ever, and the movie is filled with pretty girls and people I find funny, but I just couldn’t remember thinking that much of it.  I also have a terrible memory, so we’ll see how it turned out in my review of Mean Girls, written by Tina Fey, directed by Mark Waters, and starring Lindsay Lohan, Rachel McAdams, Lacey Chabert, Amanda Seyfried, Lizzy Caplan, Daniel Franzese, Jonathan Bennett, Tina Fey, Tim Meadows, Neil Flynn, Ana Gasteyer, and Amy Poehler.

I think the strangest thing about this movie is that I hate the type of movie, but I like this movie.  It handles exactly like numerous other movies about the new girl having a rough time in school, and the odd girl becoming cool but forgetting who she is, and so many other high school movies.  These movies are pretty played out and cliche and not usually worth watching.  The difference with this movie is that it was written by Tina Fey.  As with most things, having Tina Fey behind it makes it good.  This movie was pretty damned funny.  A little sappy in parts for my tastes, but still enjoyable all the way through.  There are a lot of really solid laughs in this movie, and a couple of things that didn’t make as much sense to me though, in the movie’s defense, I was rarely a girl in high school.  The whole idea of the Burn Book seemed like way too much work to rag on someone that will potentially never see it.  You could just sit around and make fun of them without having to actually buy a book, clip out photos, and paste them in the book with some snarky comment.  I suppose it’s something that high school girls might do, but I am way too lazy to do that.  Words are so much easier.  The other thing that didn’t make sense to me was in the end when Cady is breaking the crown into pieces and giving it to everyone.  The reason it doesn’t make sense to me is that she freakin’ Jesus’d that crown.  Every time she broke it, there was still enough to go around for everyone in the auditorium.  This is totally unbelievable because if Lohan had Jesus powers, you know she’d just be at the water fountain turning it to wine.

The cast is almost entirely great.  I may have already indicated (in the sly, hidden way that I did) that I am not that big of a fan of Lindsay Lohan, but I give her credit for doing pretty well in this movie.  This was probably the best looking she’ll ever be (as I hear meth ruins your teeth), and she also pulled off her comedic and emotional bits very well.  It was super racist and not cool for her to “Jambo” at the black people she saw, and seemed a little out of character.  I mean, I laughed, but I’m a racist.  Also, never really believed Lohan as a math expert.  I understand that there is some math involved with dividing drugs up, but I don’t think that would make you an expert.  I feel a little bad for Rachel McAdams because she’s gorgeous and probably a super nice girl, but she’s also really good at playing a bitch.  I’d like to see her play more sweet girls so I could just fall in love with her.  Of course, it’s not bitchy for her to tell Lohan that she was just a less hot version of her.  That’s just good, solid facts.  I feel extra bad for Lacey Chabert because she is so completely gorgeous as well, and also pulled off the comedy and the parts where she had to cry so well, but she really hasn’t become as mainstream as she should.  She had Not Another Teen Movie, and her one line was pretty hilarious in that, but she needs to be more famous.  They let Kate Hudson ruin so many huge profile comedies and yet Chabert hasn’t really done a big movie since 2004?  Not fair, Hollywood!  The same could be said for Amanda Seyfried, I guess.  She had that one horrible Red Riding Hood movie, but not a lot worth talking about.  Nothing good, but at least they were big.  She was pretty funny in this movie, and easily the sweetest girl in the Plastics because she was so dumb and innocent.  Tina Fey was great in this as well, and quite frankly, arguably the hottest woman in this movie.  I’ll stand by that.  She gets her bra out in the introduction of her character as well, and I’m always down for that.  She has a great deal of funny parts in the movie, but she isn’t in that often.  Tim Meadows kills practically every time he’s on camera as well, but he was a little underused.  He was very put upon in this role, but still very funny.  I love Lizzy Caplan a lot as well, but her character in this was a little too hateful and irritating.  She was sometimes justified, but sometimes you should just move on with your life.  Get a boyfriend, that’ll clear up that whole “lesbian” thing.  I’ll even volunteer!  It’d be way better than ending up with that creepy Mathlete guy!  I didn’t like her gay friend, Daniel Franzese, at first, but the second he called that short girl Danny DeVito, I was in.  Amy Poehler was consistently hilarious as the mom that won’t let go of her youth.  The best thing she did was when she was in the audience, dancing along with her daughter and the other Plastics in their overly-sexy “Jingle Bell Rock” dance.  That made me appreciate it double!  Ana Gasteyer made little to no impact on me as Cady’s mom, but they did give Neil Flynn a couple of funny parts, like when he had no idea that Cady wasn’t supposed to be allowed to leave when she was grounded.  Jonathan Bennett never really did much for me as the object of Cady’s desire.  He wasn’t really around much beyond something to look at, and he got on my nerves with how he reacted when Cady was drunkenly confessing things to him.  Why would you get all pissy that a girl was afraid to talk to you because it would make her friend angry?  That’s fairly normal.  I do understand getting a little upset when she throws up on you, though.  Of course, that’s kind of something you should expect when working with Lohan.

I think I’ve just about run out of Lindsay Lohan jokes.  Mean Girls was an enjoyable watch, and I feel like I enjoyed it much more on this viewing than I had on whichever viewing made me give it two and a half stars on Rotten Tomatoes.  Sure, it’s basic premise is one that is a little played out, and one I don’t usually find that enjoyable, but Tina Fey can make almost anything work.  There are a lot of very solid laughs in this movie, and pretty awesome performances to make those jokes work.  There’s also some good emotion to the movie, and it ends up with a nice message that we probably all expected from the start of the movie, but it’s still very enjoyable.  I rented the movie from Netflix, but it’s not available for streaming.  Next time I want to watch it, I will feel comfortable just going out and purchasing it.  Mean Girls gets “I like this movie like Lindsay Lohan loves heroin” out of “I can’t help it that I’m so popular.”