Houston, We’ve Had a Problem 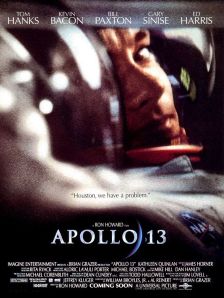 I feel that not having seen a movie as classic as Citizen Kane until recently was excusable because I was nowhere near alive when it came out.  But for me to have not seen a classic movie such as today’s movie when it came out when I was 12 is a problem.  PROBLEM SOLVED!  I’ve now watched this movie.  I and the entire world had heard about this movie and the event it was based on for quite some time, AND it stars at least 2 people that could be in my list of top actors (as well as many others I like a lot), AND it was also directed by a great director, yet I hadn’t seen it.  I had not seen this movie until now because … uh … well okay, I have no idea why I didn’t see it.  I guess I just took my time.  And so, just over 16 years late, I present to you my review of Apollo 13, written by William Broyles and Al Reinert, directed by Ron Howard, and starring Tom Hanks, Bill Paxton, Kevin Bacon, Ed Harris, Gary Sinise, Kathleen Quinlan, Clint Howard, David Andrews, Xander Berkeley, Miko Hughes, Mary Kate Schellhardt, Max Elliot Slade, and Emily Ann Lloyd.

Astronaut Jim Lovell (Tom Hanks) is giving a tour of NASA’s Vehicle Assembly Building when he gets informed that he and his crew – Fred Haise (Bill Paxton) and Ken Mattingly (Gary Sinise) – are getting their mission to the moon pushed up from Apollo 14 to Apollo 13.  Having just recently watched Neil Armstrong walk on the moon during the Apollo 11, Lovell says he wants to get him some of that action.  During training, it is determined that Mattingly is unable to go because he was exposed to measles and may get sick mid-mission, so he is replaced by Jack Swigert (Kevin Bacon).  They get all launched up and that’s when shit hits the fan … continuously for the next hour and a half.

Most people were probably well aware of this before I was, but this is a damned good film.  The story seems like one that would be hard to get wrong when you base your movie around a real life event that captured the attention of the world so thoroughly as it did, but they did not get it wrong.  They got it so right that it kind of bummed me out that I wasn’t alive to witness the world around this time, and even more so around the Apollo 11 time.  Instead, I got to grow up in the time where NASA says we’re not going to the moon anymore and, by the way, we’re gonna shit all over Pluto’s face and call it a bitch planet.  I don’t even know who you are anymore, NASA.  In fact, I’m not even going to capitalize your name anymore.  Anyways, this movie definitely tells nasa’s story with gusto.  It starts out perhaps a little slow, but once you get up into space, it really doesn’t waste very much time before it starts shoveling tension on to you, and it doesn’t really let you unclinch your anus until the last minute or so.  I also found it pretty amazing that this movie was able to turn something as boring as watching people do math and flick switches into something so riveting and engrossing.

You know what takes that there great story and elevates it so much?  PERFORMANCES!!  Tom Hanks, as it turns out, is Tom Hanks!  This dude is the best.  He always has the most real and emotional and charming portrayals of characters in the movies he’s in that you can’t help but love him and feel for him.  In this one, he really doesn’t overdo it and freak out as most of us would in his position.  I would lose my shit, at least that’s what nasa said when I tested to be an astronaut.  (Psst.  I cried and peed myself while filling out the application)  He was the glue of the team and, probably, the movie.  I love Ed Harris a lot too.  He had to keep his shit together and get everyone around him on task following these tragedies and didn’t allow himself to lose it until those astronauts were safe, finally breaking down into tears.  Paxton and Bacon were very good supporting characters on the mission, but they both let the events get to them and they freaked out a little, but Hanks put the kibosh on that nonsense.  I get the feeling that Hanks might not like Gary Sinise very much though.  Assuming (as I do) that he has control over the movies he’s in, he fucks with Sinise every time he’s in a movie with him.  What do you want to do to Gary in Forrest Gump?  Cut them legs off, and make him a drunken whore-monger while you’re at it.  What about Apollo 13?  It wouldn’t work to take his legs off.  Uh…give him the measles and make it so he can’t come into space.  Then tell him later he didn’t actually have measles.  Fuck you, Gary!  But Gary did bring it pretty well to the movie.  He was noticeably bummed out about not getting to be on the mission, but didn’t throw the whole “I was on Earth while you guys were counting the minutes to your deaths” back in their faces.  Instead, he kind of saved the day from the ground.  Hanks should really give this guy another chance.

The only thing I find more regrettable than not being alive when Apollo 13 and Apollo 11 actually went down was the fact that it took me so long to watch the awesome movie about it!  Apollo 13 is what happens when you take a real life event, retell it in an awesome, tension-filled way with a great director, and perform it superbly with actors who are supremely awesome.  There was not a part of this movie I did not like.  It’s available via Netflix streaming, so you too have no excuse to not be watching this movie right now save for the overwhelming compelling nonsense streaming from my fingers right now.  I will be purchasing this movie for my collection post haste, so you should in the very least be watching it streaming.  Apollo 13 gets “So long, Earth.  Catch you on the flip side” out of “Pluto, you’re still a planet to me.”